Morgues are running out of space, cemeteries have long waiting periods and there's also a casket shortage due to the coronavirus pandemic. 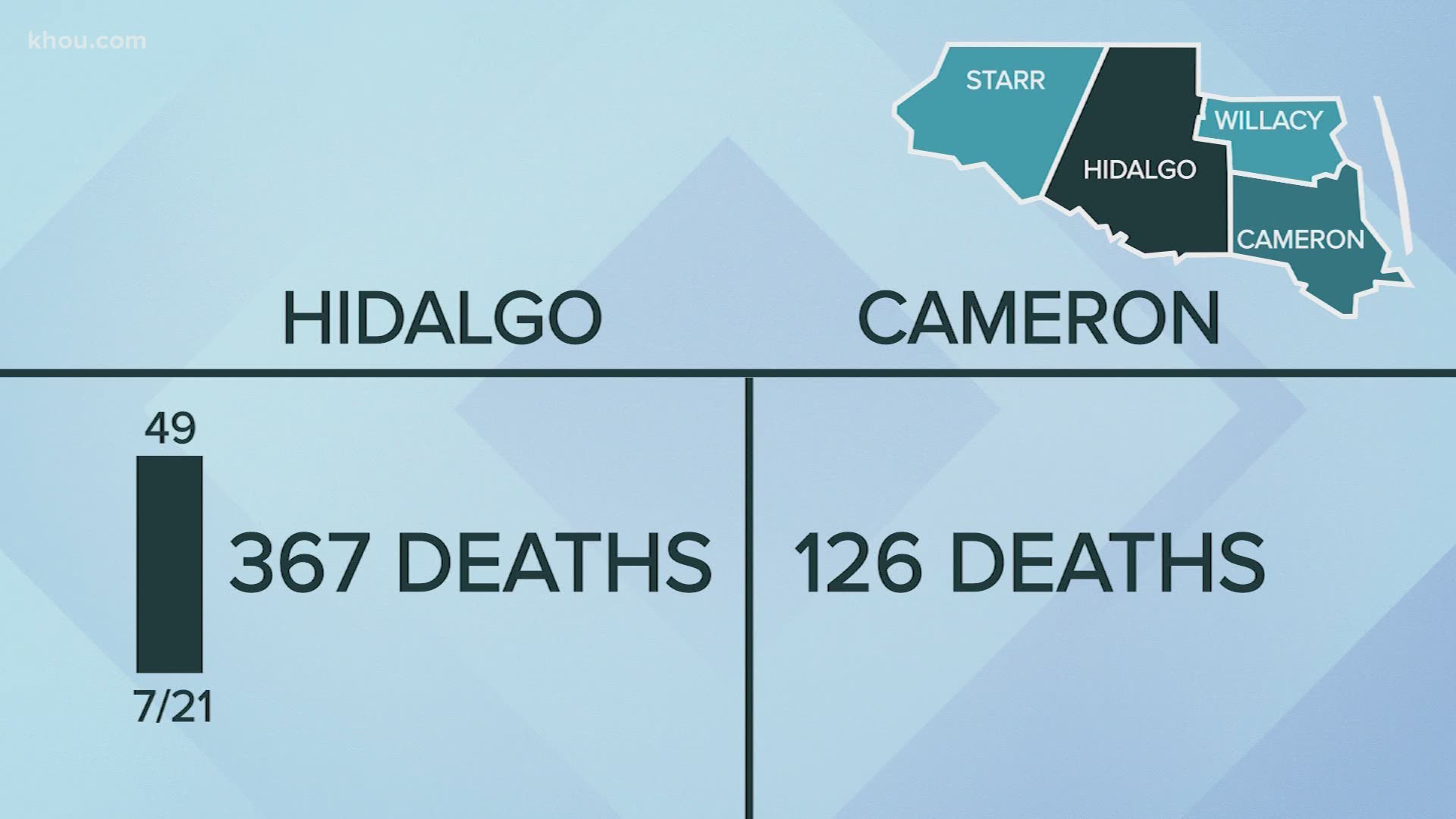 HOUSTON — The Rio Grande Valley is struggling to keep up with the onslaught of COVID-19 victims. The result has been morgues running out of space, cemeteries and crematoriums having long waits and a shortage of caskets, several funeral directors told KHOU 11.

On Tuesday, the Texas Funeral Directors Association, an organization representing roughly 1,500 funeral homes and approximately 6,000 licensed funeral directors, put a call out to its members asking for volunteers to help with removals and transports in South Texas, saying the Rio Grande Valley was “extremely hard hit.”

“If this thing continues as it is, the numbers continue to climb, the deaths continue to mount, you're going to see at least a version of what New York City went through,” said Gene Allen, Texas Funeral Directors Association’s president, who just returned from helping in the Valley. “The surge in the number of deaths in the lower Rio Grande Valley has certainly put a strain on the local funeral homes."

Salinas, who owns funeral homes in Elsa and Brownsville, said he hasn’t had a day off since June 27.

“The workload is extremely heavy. I mean, we've gone nights without sleeping,” he said.

Salinas said on a pre-pandemic month, he’d help put to rest about 20 people between his two funeral homes. Starting June 27, he’s helped 73 people find their resting place. Most of them, he told KHOU 11, are COVID-19 victims.

Salinas’ grandmother just lost her brother to the pandemic.

“The virus is real and that's affecting many, many of our community members and their families,” Salinas said. “We did see it where it affected New York, but we never in our wildest dreams thought that it would happen here at home.”

The Rio Grande Valley is home for Salinas. The Valley is made up of Hidalgo, Cameron, Starr and Willacy counties which are located in deep South Texas. On Tuesday, Hidalgo County reported a single-day record of 49 deaths due to complications from COVID-19, bringing the total to 367.

Cameron County is reporting 126 COVID deaths but says that number is low, as the county fights to manually keep up with records.

“We're going through it manually,” said Dr. James Castillo with Cameron County Health and Human Services, in a recent press conference. “We're being as transparent as we can and as accurate as we can. We’re trying their hardest to be as close as we can do you can trust these numbers. But trust me, they’re worse than what we’re reporting. If you’re waiting for something to get really bad, it’s here.”

Allen told KHOU 11 that two morgue trailers were provided for the area as well as some additional supplies, but more assistance will be needed.

“There’s just a handful of crematories and they are really backed up,” he said. “And that's the reason some of the funeral homes are overflowing with refrigeration facilities.”

The Texas Division of Emergency Management told KHOU 11 that TDEM and FEMA have provided some refrigerated trailers to the Valley, as well as to San Antonio and Laredo.

TDEM said on July 11 it requested an additional 14 trailers from FEMA as a preparedness measure in case local governments anywhere in Texas need them.

“It's a very sobering occurrence,” Allen said of his work in the Valley. “It makes you realize how reality is and how serious it is.”

The only thing Funeral Director Ralph Torres can compare this to is the beginning of the AIDS HIV epidemic. He’s been in the business for 30 years and is currently working in the Valley.

Torres said families of the deceased have a hard time with limits put on gatherings and funerals during the pandemic.

“Also, the burials and affirmations, you’re not done within three or four business days,” Torres said. “They’re done about maybe two weeks afterward. And people have a hard time waiting. I think it makes it harder for them during this very bad time to wait two (or) three weeks to have a burial or to get ashes back. They don’t have closure.”

Two additional RRRT teams went to Eagle Pass and Del Rio. This is in addition to the HHS Disaster Medical Assistance Teams deployed to Laredo and McAllen, FEMA told KHOU11 in an emailed statement.

RELATED: How to make sure you don’t get charged for your COVID-19 test