The fight over distributing voter registration materials at post offices

Most boxes with voter registration cards were either thrown out or returned by post offices in Harris County. 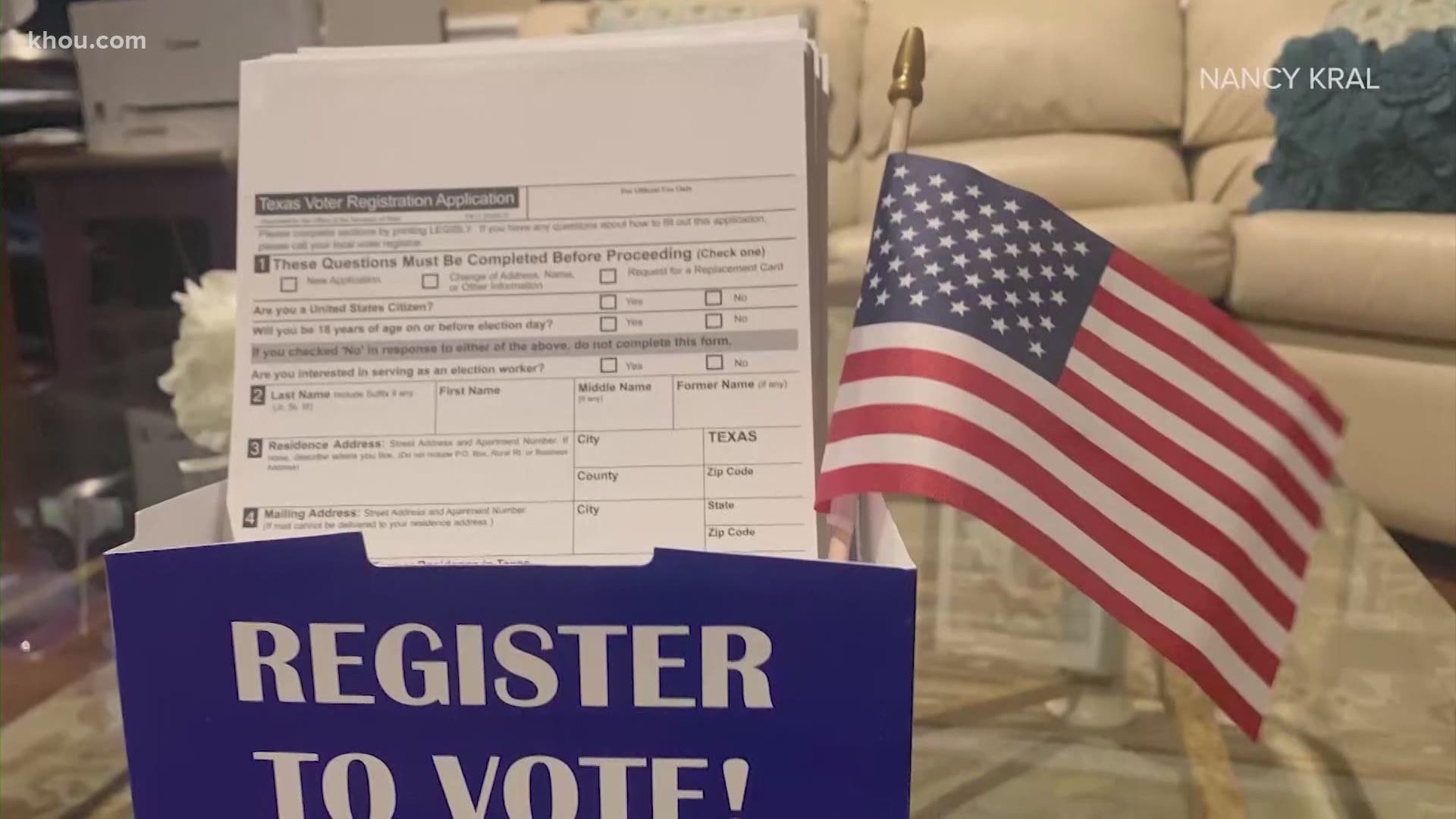 HOUSTON — Two members of Texas' Congressional delegation are asking Houston post office leadership why at least 20 offices refused to accept donated voter registration cards -- government-printed documents that must be filled out and submitted to enable citizens to vote.

The letter they wrote comes on the heels of the League of Women Voters of Houston, a non-partisan civic engagement group, tried to deliver dozens of boxes with voter registration cards, American flag and election-related information.

On its website, the Texas Secretary of State lists the post office as one of the places where you can get voter registration information.

The letter, dated Sept. 11, 2020. is signed by Texas Reps. Sylvia Garcia and Al Green, both Democrats representing areas in and around Houston.

“The practice of allowing access to blank voter-registration cards in the United States Postal Service locations is long-standing,” the letter states. “Voter registration applications can be displayed in the lobbies of postal facilities, or at least available upon request by postal customers depending on the space available in each postal facility. Therefore, it is concerning to us why some locations are turning away donations of voter registration cards from volunteers who are eager to facilitate their community members’ right to vote in our democratic elections.”

The pandemic forced the League of Women Voters of Houston, which is celebrating its 100-year anniversary, to look for alternative ways to provide voters voter registration materials.

“Because of COVID, effort to actually register people was hampered,” said Dr. Annie Johnson Benifield, vice president of voter services for the League of Women Voters, Houston area. “No major indoor activities, no festivals and events of that nature.”

“This is the first time we tried this initiative in terms of the post office,” Johnson Benifield added, ”but it was not uncommon to go to post offices to get voter registration cards in the past.”

Johnson Benifield said many voters used to be registered at naturalization ceremonies, but that has become nearly impossible since the pandemic.

Under the LWV-Houston's “Adopt a Post Office” program in Harris County, volunteers would distribute boxes with election information, American flags and voter registration cards to Harris County post offices that would accept them.

LWV-Houston ordered 500 boxes to distribute all over the area, not just at postal facilities.

“I was greeted quite graciously when I took the box out there. The assistant manager she said she was so glad I brought it -- that they've had people asking about it. And so she was going to put it out for me,” said Dee Koblenz, a League volunteer.  “I explained that I would be coming back once a week for the next few weeks just to be sure that they weren't running low on any of the supplies, which I did. I went back the next week and there was this box sitting on a counter, very visible. And she said that some people had come by and taken some of the voter registration forms, which was wonderful.”

Koblenz said when she went back this week, the box was missing.

“When I got to speak to the post office person, he said, 'No, we've been told we can't do that,’” she recalled.

Eric Staib, another volunteer, said when he first dropped off his box, employees were very happy, saying people have been asking for voter registration materials and asked Staib to come back to refill the box.

“The first couple of times that I refreshed the box, I found that people were actually using this public service we're providing,” he said. “Most of my applications were being taken each week and then came back for the third refresh. And I was told, ‘Don't bring that around here.’”

LWV volunteer Marcy Jolosky told KHOU 11 she still had her box in the car, after it was rejected at her local post office.

“I took it into my post office and waited for the clerk who told me that he could not accept the any information about elections,” she said.

All three volunteers are also voter registrars, and have been trained on how to register voters. From their training, at least one recalled being told if out of voter registration forms, to send people to the post office for one.

“The fact that, (as) Dee (Koblenz) mentioned, people had already been asking the post office for these forms before we did this -- this is a public service we are providing that being taken away, yeah, it's disappointing,” Staib said.

“It just seems coincidental that it's happening right before a presidential election. You remove boxes, you cut stock machines, you deny overtime to employees, you have less staffing, and then you also don't allow voter registration cards, all right before people are really thinking about voting in September and October leading up to a presidential race, you know, connect the dots yourself. People need to think about it. Why is it all going? Happening right now.”

USPS declined an on-camera interview or to answer any specific questions on the issue.

It provided the following statement.

“The Postal Service has not changed its policies on voter registration activities or displaying voter registration information in lobbies. Poster 7 sets out specific limitations and conditions that apply to in-person voter registration drives that may occur in public areas of postal facilities during an appropriate period before an election. But this is different from depositing unattended stacks or boxes of forms or other materials, which is prohibited under 39 C.F.R. § 232.1(o). Local officials do not have authority to enter into agreements for deposit or display of such materials.”

USPS’ rules and regulations -- which include rules on “depositing literature” -- state that most literature is prohibited, except “official Postal Service and other governmental notices and announcements.” It’s unclear if USPS considers a voter registration form a government notice.

As of September 10, LWV-Houston told KHOU 11 that 46 post offices rejected, returned or discarded boxes without notice. Some have agreed to keep the voter registration applications behind the counter to distribute upon request. Johnson Benifield said 21 post offices accepted and displayed the boxes. Some volunteers have returned to fill them up.

“I am probably dismayed by the fact that a public institution,” said Johnson Benifield, “this is part of the federal government, that could easily be a place that you could fill out a card, drop it in the mail, because this already postpaid and you're already at the post office.”

“What the League of Women Voters is doing is exceedingly important,” Green said. “In an election where we have a pandemic limiting travel for many people. A local post office is a place people frequent such that they can easily access non-partisan voter registration material. I commend the League of Women Voters for this non-partisan effort to help all eligible voters have the opportunity to vote.”

Green added that his chief of staff will be looking if legislation is needed on the federal level to clarify this.

In the letter signed by Green and Garcia, representatives tell USPS leaders in Houston, they wanted an answer by Sept. 18, providing “any directives issued by USPS in general or the Houston regional USPS office specifically explaining on what grounds post offices reject donations of blank voter registrations.”

“If no such directive has been provided, we fully expect Houston area post office to accept donations of blank voter registration applications, as appropriate and in accordance with other policies, to best serve the needs of our constituents,” the letter said."

According to published reports, on Sept. 2, Houston Mayor Sylvester Turner sent a letter to Postmaster Corey Richards asking why voter registration materials provided by the League of Women Voters were rejected.

KHOU 11 requested an interview with Turner Thursday, but his spokesperson said he wasn’t available.

KHOU 11 reached out to the Secretary of State’s office but we have not heard back.

"We are aware of the letter and appreciate the concerns expressed. However, as we have previously stated elsewhere, the Postal Service has not changed its policies on voter registration activities or displaying voter registration information in lobbies. Poster 7 sets out specific limitations and conditions that apply to in-person voter registration drives that may occur in public areas of postal facilities during an appropriate period before an election. But this is different from depositing unattended stacks or boxes of forms or other materials, which is prohibited under 39 C.F.R. § 232.1(o). Local officials do not have authority to enter into agreements for deposit or display of such materials. Here is a link to the Postal Service’s Poster 7: https://about.usps.com/posters/pos7.pdf"