HOUSTON — Attorneys for the family of the woman killed in a botched drug raid back in January provided an autopsy report Thursday.

Rhogena Nicholas, 58, and her husband Dennis Tuttle were shot and killed during the no-knock raid on Harding Street on January 28. Five officers were injured in the raid.

The autopsy report shows Nicholas suffered five "gunshot wounds to the torso and right lower extremity." The report said she had no drugs in her system.

Her death has been ruled a homicide.

For the full report, click here or view below. 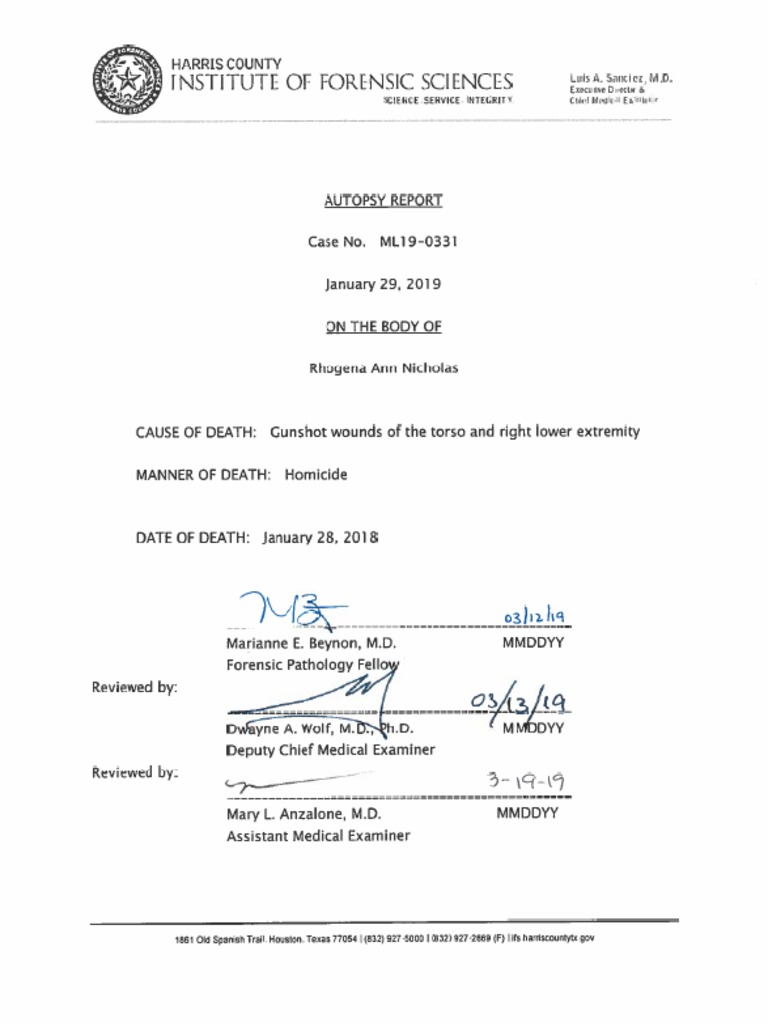 The following statement from Nicholas' family was released on Thursday:

“The findings of the Harris County Institute of Forensic Sciences in the autopsy of Rhogena Nicholas confirm that she was killed by Houston Police Department officers who struck her with five gunshot wounds in the front and back of her body in the rogue, no-knock raid at her Harding Street home.

The autopsy report confirms a growing list of troubling questions about the conduct and claims of HPD before, during, and after the out-of-control and unjustified attack. While our independent investigation of the fatal incident continues, the autopsy report specifically notes a lack of .357 shell casings at the scene, the gun police claimed was possessed by Ms. Nicholas’ husband.

The autopsy report also appears to call further into question the claims of Houston Police Chief Art Acevedo and Houston Police Officers’ Union President Joe Gamaldi at the time of the incident and immediately afterward. To date, neither the police chief nor the union president has revised or corrected their statements about the incident, especially the clearly debunked claims that their home was an active ‘drug house.’

The Nicholas family’s search for the truth of what happened to Rhogena that terrible day on Harding Street will continue. This week, we formally invited the Texas Rangers to attend our ongoing investigation at the home with nationally recognized crime scene experts. The state agency, which both attended the incident scene and assisted in a canvass for some time after to collect evidence, including videos, declined the invitation.

No matter what is learned going forward, it’s clear Rhogena did not deserve to be executed in her own home. Through their independent investigation, the Nicholas family is committed to helping protect the community and other families from continuing to face terrible ordeals like this one. Until then, the family thanks their Houston neighbors, family, and friends around the nation for the condolences and support extended to them in the aftermath of Rhogena’s unjustifiable death.”