They slammed a U-Haul into the storefront before taking five bicycles worth about $10,000. Pearland Bicycles says it's the second time they've been hit in 2020. 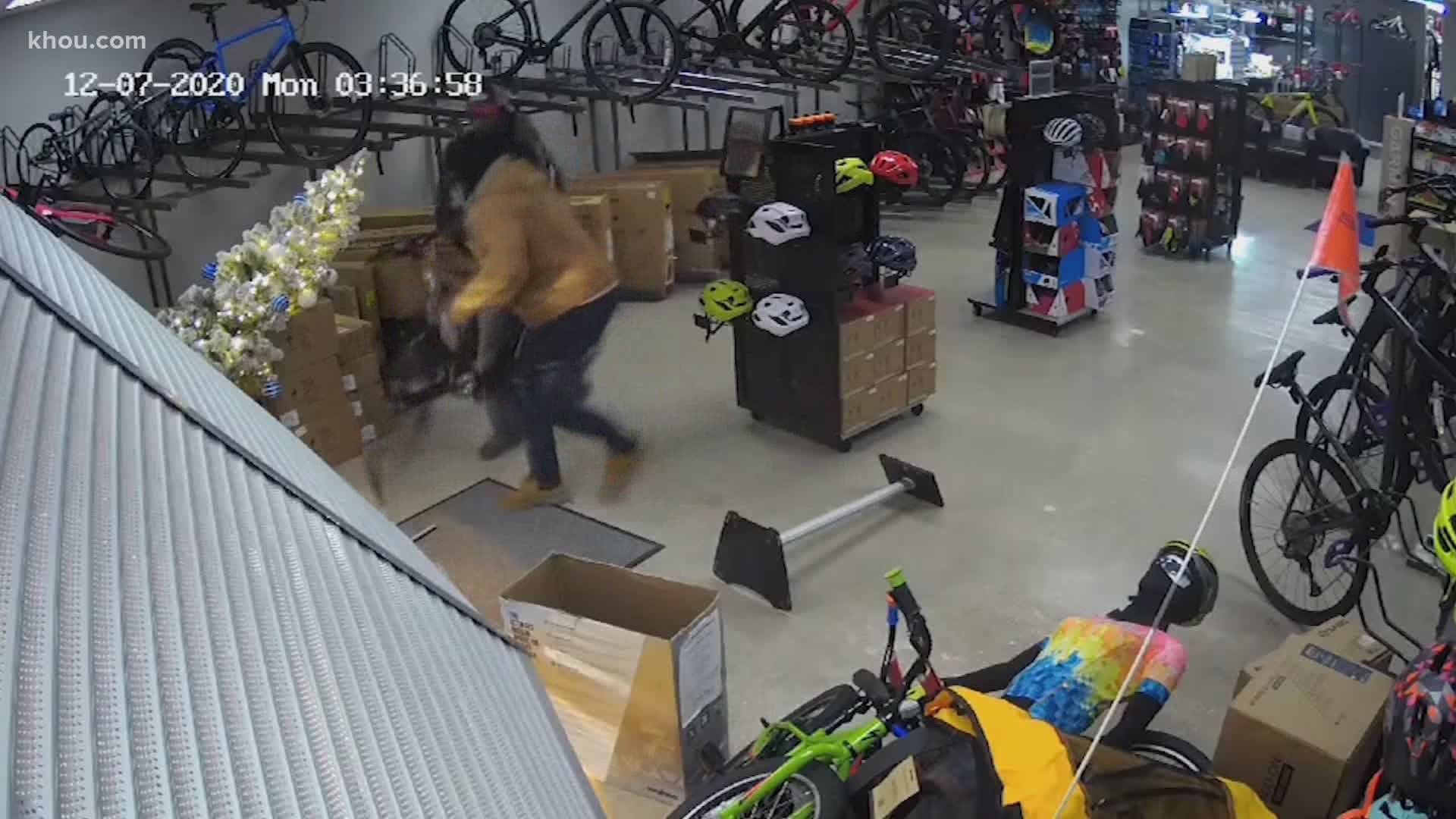 PEARLAND, Texas — It's not what anyone wants to wake up to at 4 in the morning. And the owners of the Pearland bike shop say it's the second time it has happened this year.

RELATED: Trio may be responsible for series of Houston-area bicycle shop burglaries during COVID-19 pandemic

When they arrived at Pearland Bicycles they saw the destruction.

“It’s a sick feeling," said owner Daryl Catching, who drove over to his store as soon as he got the notification. “I could see the store and I could see the glass was broken ... shattered.”

According to surveillance video released by the store, a quartet of thieves used a U-Haul to smash the storefront.

Once inside, they quickly grabbed five bikes and slid them under the damaged storefront. The owners said they got away with about $10,000 worth of bikes.

Catching said his concern was not about the stuff, but his employees' safety and their ability to provide for their families.

“Your employees become your family, and you worry about their wellbeing," Catching said.

Here's what they said was taken:

Some customers had already paid for the bikes that were stolen.

It's the second time this year Pearland Bicycles has been robbed. In mid-July, another group of thieves used a crowbar to break in and steal 17 bikes. Catching installed the aluminum shutters after that incident.

Now, he's looking into more security measures, including bollards out front to prevent another car from ramming its way in.

Catching said that he has noticed a surge in the popularity of bikes during the pandemic. That popularity has been affecting his supply, and the more budget-friendly bikes are out of stock, meaning the bikes left in the shop average about $1,300 each, roughly double his normal average price.

“With COVID, everyone’s riding bikes. It's record numbers," Catching said. “You’re definitely apprehensive about building bikes and putting nicer bikes on the floor because you feel like it’s bait.”

.@PearlandBikes owner Daryl Catching sent me this video, says it's the 2nd time this year his business has been broken into and bikes stolen. This time, about $10K worth of bikes, which he says have become wildly popular during #COVID19 Do you recognize the men? @KHOU #khou11 pic.twitter.com/Brvq62Hwuq

Pearland Bicycles is not the only Houston-area bike store to be robbed recently.

On July 18, Bikeland in The Woodlands was struck and lost an estimated $30,000 in bikes. The crooks used a truck and a van. Owner Jeff Chaffin says the two vehicles were actually parked at a nearby gas station next to a Shenandoah police car just moments earlier.

Anyone with information on any of these robberies should call the corresponding police department.