The victim and a suspect of a deadly home invasion in north Harris County on Saturday have been identified. 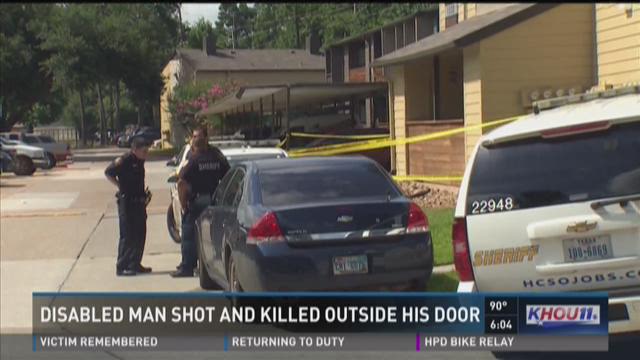 The victim and a suspect of a deadly home invasion in north Harris County on Saturday have been identified.

Shots rang out at the Copper Lodge Apartments at 1000 Cypress Station near FM 1960 about 5:30 a.m. Saturday, according to Harris County Sheriff’s Department dispatch information.

“From what we can tell at this point, it’s not our usual home invasion scenario,” said Sgt. Allen Beall of the Harris County Sheriff’s Department.

Sgt. Beall said the victim -- identified as Robert Russo, 64 -- was shot and killed right outside his patio door.

“(He) appears to have suffered at least one gunshot wound. He is deceased at the scene,” Sgt. Beall said. “There’s a wheelchair in the apartment.Talking to the neighbors, he seems to have some disability."

Investigators located a blood trail leading from the apartment to the rear fence line of the apartment complex and found the suspect -- identified as Michael Brown, 26 -- lying on the ground next to a ski mask. Authorities say Brown was suffering from a gunshot wound to the side and was transported to the hospital in stable condition.

Murder charges are pending against Brown.

Shots rang out at the Copper Lodge Apartments at 1000 Cypress Station near FM 1960 about 5:30 a.m. Saturday, according to Harris County Sheriff&rsquo;s Department dispatch information.&nbsp;

There have been some sightings of suspicious people in the parking lot, but one neighbor said he was stunned that something so sad and violent happened at their normally trouble-free complex.

“This is something strange, because this is a really, really peaceful place, and it’s a quiet and friendly people,” said Frank Jabaji.

Jabaji said he used to see the victim “walking with a cane. He seemed to "mind his own business," Jabaji said.

Authorities said as soon as the 26-year-old man whom they found shot at the complex is medically stable and able to talk to them, they want to know if he killed the senior citizen, if the senior citizen shot him and what sparked the deadly encounter between the two men in the first place.