HOUSTON - A teen driver has pleaded guilty to manslaughter charges in the deaths of two teenagers. 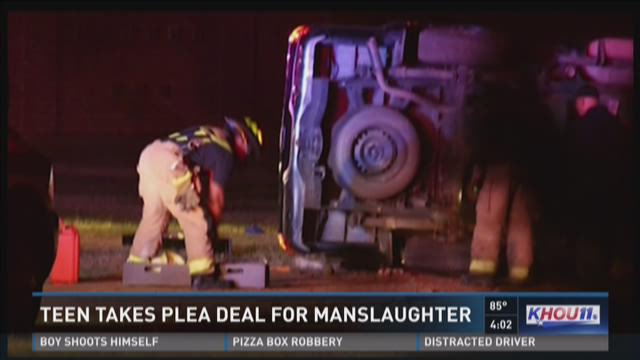 HOUSTON - A teen driver has pleaded guilty to manslaughter charges in the deaths of two teenagers.

In 2014, Aaron Jamison was behind the wheel of a truck involved in a crash that left two Katy teens dead.

Investigators said that Jamison was driving on the trip back from a late-night bonfire with five teens in the cab of the vehicle and as many as 10 in the truck bed. Jamison picked up speed and started weaving back and forth on a dirt road. The truck flipped three times.

The victims, Trent Weber, 17, and Terra Kubala, 16 were killed in the crash on December 6, 2014. Weber was a popular Seven Lakes High School football player, while Kubala was a student at Cinco Ranch High School.

Jamison will serve 180 days in jail, work 300 hours of community service, pay a $1,000 fine, write apology letters to the victim's parents and has 10 years of deferred adjudication.