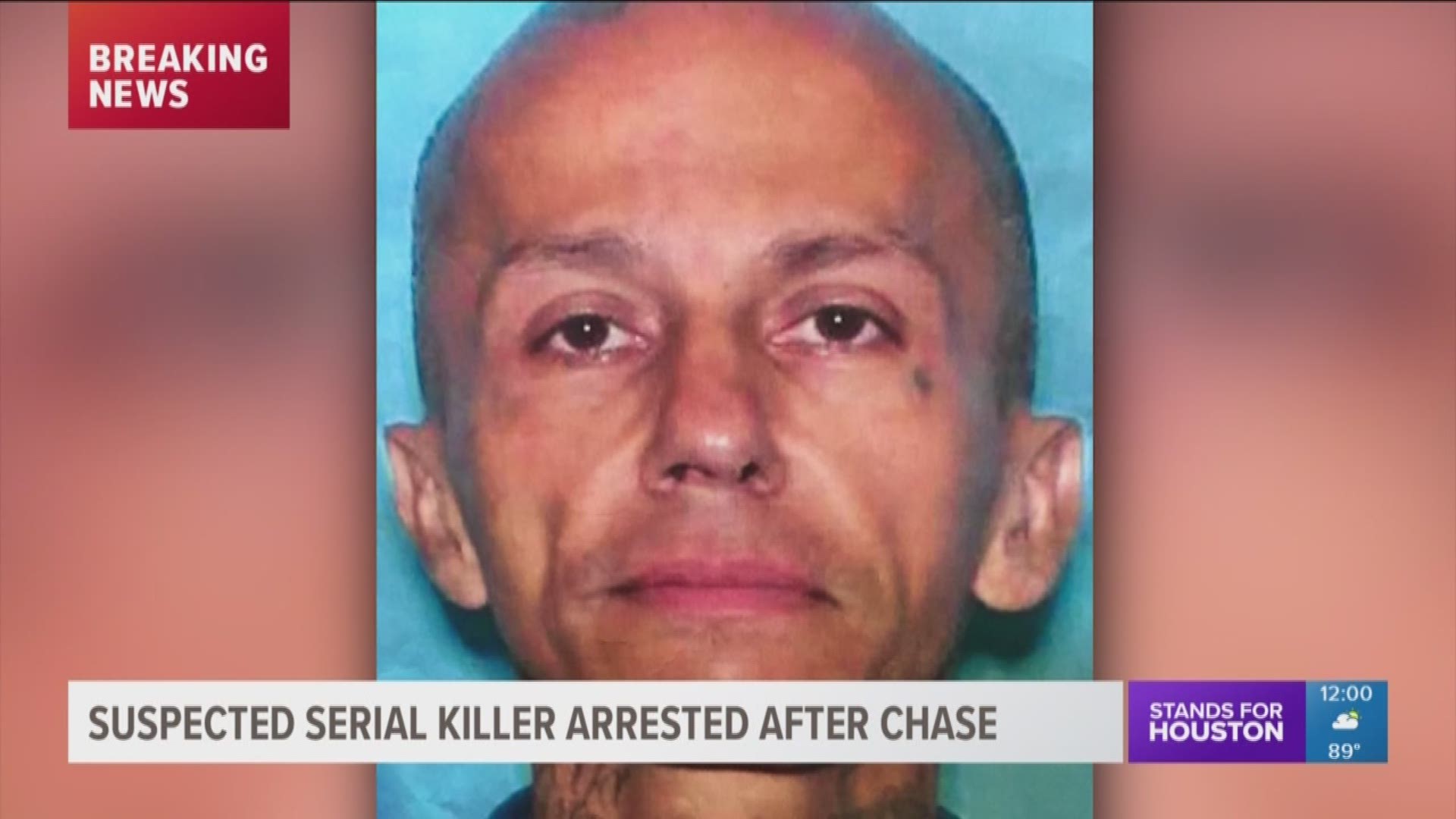 HARRIS COUNTY, Texas – Accused serial killer Jose Gilberto Rodriguez, 46, was arrested after a chase in northwest Harris County Tuesday morning. He was less than a mile from where his crime spree started.

Houston Police Chief Art Acevedo said the ex-con may have been looking for his next victim.

“I found out he was caught this morning when I was sitting in my backyard," Debra Debelis said. "My dogs were going crazy. I heard a lot of police cars. And then the helicopters. It was just unreal.”

The deputy who made the arrest said he knew the entire community wanted Rodriguez behind bars.

“When I left my house last night for my shift, I told my wife ‘I’m gonna catch him,’” a softspoken Reyes said during a news conference Tuesday. "Sure enough, I did."

.@SheriffEd_HCSO says everyone is breathing a sigh of relief at this point, says he had sufficient info in each crime that they’re related and Rodriguez is likely responsible #khou11 pic.twitter.com/pZVS0Q7fGm 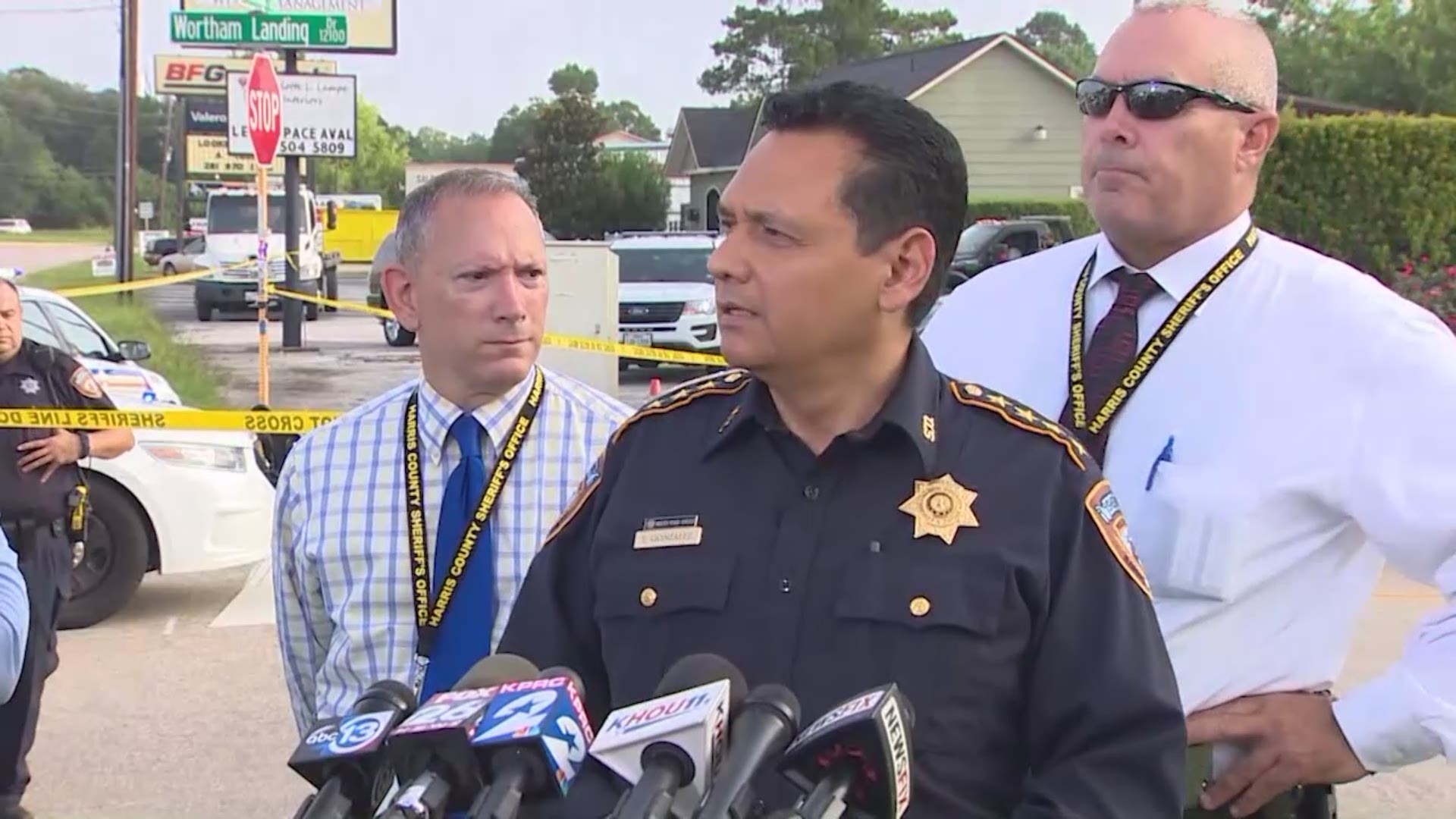 Rodriguez was caught thanks to an alert resident who called in a suspicious vehicle in their neighborhood. That was just after 6 a.m. Tuesday

Breaking: Sheriff Ed Gonzalez says Harris County deputies were alerted to crime spree suspect Jose Gilberto Rodriguez by a citizen who saw the suspect vehicle in the NW side neighborhood. There was a brief chase and he was captured at 6:56a.m. #khou #HouNews

A deputy responded a few minutes after the call came in and began searching the area, Gonzalez said Tuesday morning. The deputy spotted a dark gray Nissan Sentra matching the description distributed by investigators.

When Deputy Reyes tried to stop him, Rodriguez took off.

The chase ended on Eldridge Parkway just north of Fallbrook Drive before 7 a.m. and deputies were able to take the suspected serial killer into custody without further incident.

Deputies said they also found a pistol inside the car.

Backslaps to @houstonpolice @HCSOTexas and all law enforcement partners for this great result this morning and for risking their lives every day to keep us safe. https://t.co/emG4PLjLQI

Late Tuesday morning, the Texas Department of Criminal Justice released information about Rodriguez’s history of incarceration and why he was out on parole.

In January of 1990, Rodriguez was convicted and sentenced to 25 years in prison for burglary of a habitation using a deadly weapon, attempted aggravated assault with a deadly weapon and auto theft for an incident that occurred in September of 1989.

RELATED: Here's why Jose Rodriguez was out on parole

Earlier this month, Rodriguez’s ankle monitor reported being tampered with, which is when an arrest warrant was reportedly issued.

The first person killed in the crime spree was a widow in Cypress who liked to read the Bible and bake cookies for neighbors.

Harris County sheriff's deputies found Pamela Johnson, 62, inside her home Friday in the 2400 block of Bent Pine Drive. Her brother had asked him to check on her because she wasn't answering his calls.

The widow's television, computer and jewelry were missing from her home, detectives said.

Credit: Homer, Michelle
Pamela Johnson was a widow who liked to read the Bible and surprise neighbors with homemade cookies.

On Saturday, Johnson's missing PT Cruiser was found in the parking lot of Willowbrook Mall.

Mall surveillance video showed a man, believed to be Rodriguez, walking through the mall and exiting the opposite side.

Police say other vehicles used in the crime spree were also dumped at the mall.

On Saturday night, a young employee was found shot to death inside the Mattress Firm at 7592 FM 1960, not far from Willowbrook Mall.

Allie Barrow, 28, was found by the store manager.

Employees at nearby businesses were stunned by the news.

“I’ve heard about robberies around here and stuff like that but nothing about someone being found dead. It’s pretty scary.” said Sarai Roman.

A few hours after Barrow's identity was released on Monday, police were called to another mattress store about three miles away.

They found the body of a Mattress One store sales rep inside the store in the 4400 block of I-45 near Crosstimbers. He was later identified as 57-year-old Edward Magana.

"It hit me like a train. I broke down before my mom even had the chance to," said Paola Morales, the victim's daughter. "But I knew I had to get it out of the way so I can be there for her and be strong."

RELATED: Man found shot to death inside Mattress One store

Rodriguez was driving Magana's Nissan Sentra when he was arrested.

Police also want to question Rodriguez about the robbery and shooting of a Metro Lift driver early Monday near Highway 59 and Quitman. He survived and was rushed to an area hospital.

A fifth crime, a home invasion robbery on July 9 in north Harris County could also be linked to Rodriguez. The victims were tied up and terrorized.

Houston Police Chief Art Acevedo said they believe Rodriguez may be responsible for other crimes.