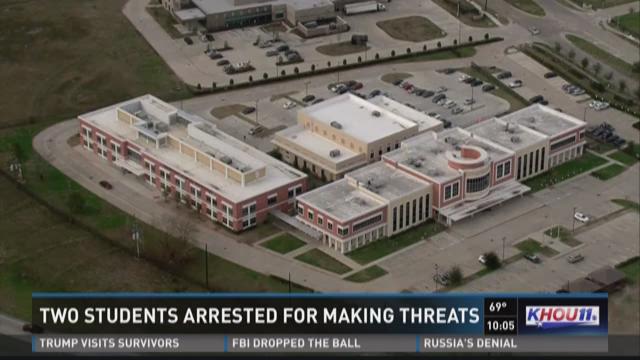 Both students, who haven’t been identified, are charged with posting threatening messages on Snapchat, a mobile messaging service that allows users to send picture and short video messages.

“Parents need to have a conversation with their child about the seriousness of posting threats on social media,” said Fort Bend County Sheriff Troy Nehls.

Sheriff Nehls says two threats were made at two Fort Bend ISD schools today, in one a student posted on Snapchat "I'm shooting up the school" #KHOU11 pic.twitter.com/90Tnpsfj7e

A 14-year-old student at Baines Middle School in Missouri City posted that he was going to show up the school, according to the sheriff’s office. A student at the school saw the message and told their parents, who in turn notified the school. That student was later arrested off campus and charged with making a terroristic threat, a third-degree felony, the sheriff’s office said.

The other student, a 15-year-old, allegedly posted two threatening Snapchat messages. One of those messages, according to the sheriff’s office, contained an image of students fleeing a school threatening the same was going to happen to a group of seventh graders. The 15-year-old then allegedly posted a follow-up link on how to sneak guns into school.

The threat comes a month after he made another threat that he was going to shoot seventh graders, the sheriff’s office said, adding that threat wasn’t relayed to school administrators.

He, too, was charged with making a terroristic threat. Both suspects are currently in a juvenile detention center.