A man who claimed he was a substitute teacher at Santa Fe High during the 2018 shooting told a harrowing story of survival. The district says he never worked there. 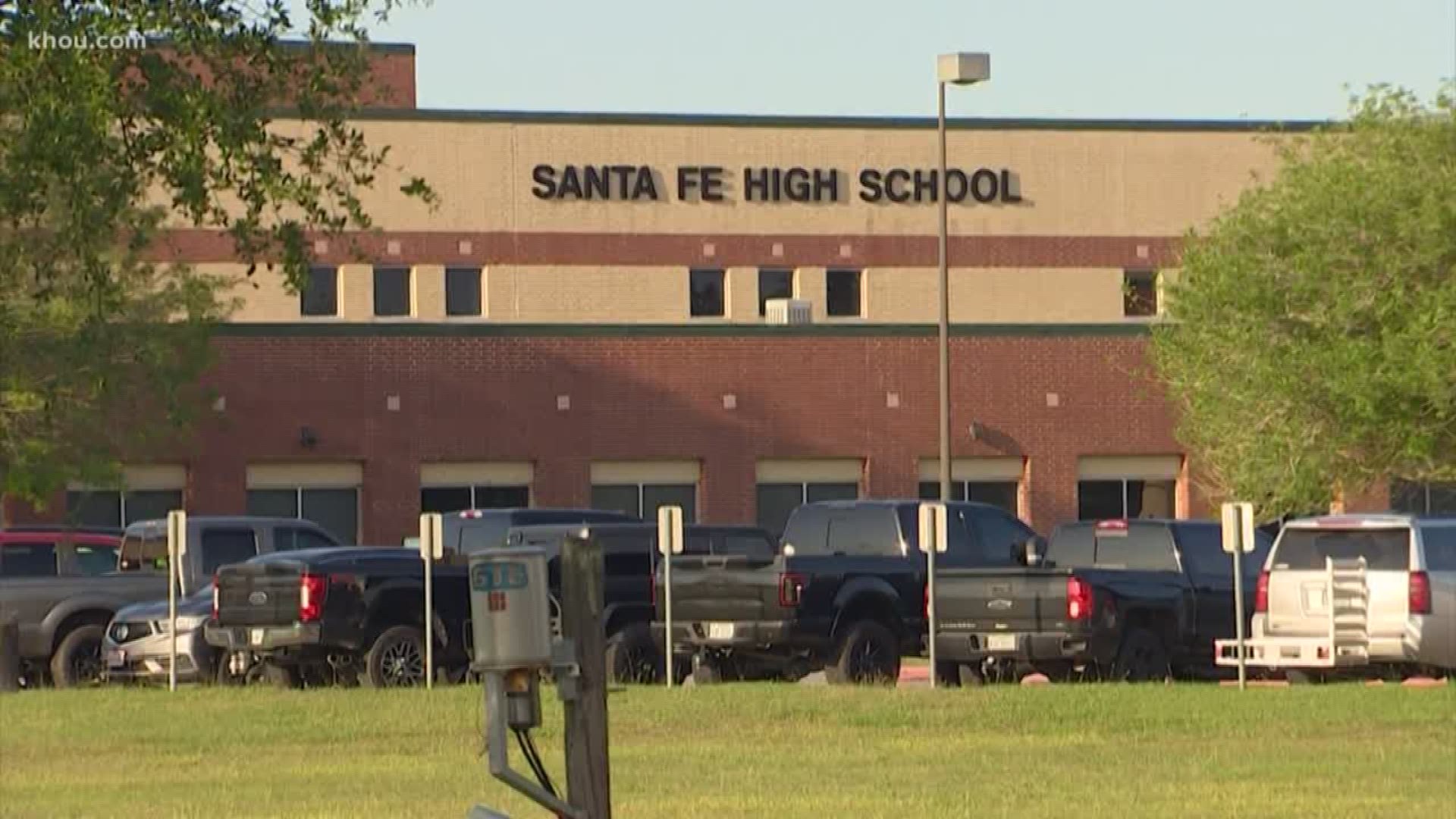 AUSTIN, Texas — (TRIBUNE) In the immediate aftermath of the May 2018 shooting at Santa Fe High School, a man who said he witnessed the carnage seemed to turn up everywhere.

The man calling himself David Briscoe appeared in Time as a substitute teacher seemingly in the wrong place at the wrong time; CNN described his heroism as he ordered his students to “get down” and kept them protected until police came; The Wall Street Journal relayed the blood-curdling screams he heard from students in the hallway.

In April, nearly a year after the shooting, he told a strikingly similar story to The Texas Tribune. But after investigating some of his claims, the Tribune did not publish his account of the shooting — because it appears his entire story was an elaborate hoax.

In a roughly 31-minute interview with the Tribune, David Briscoe told his tale: When the first shots rang out — “it was very, very loud” — he said he directed his classroom of nearly a dozen students in the remedial English course he was teaching to muffle their screams with their hands.

He barricaded the doors. Turned off the lights.

He said he could never return to the Houston-area school where 10 died and another 13 were injured last spring. “Just knowing that there’s blood on the walls where you walk at ... I don’t think I could go back,” he said, so after he and his students were rescued by law enforcement, he said he quit teaching altogether and moved to Florida, three months after he took the job at Santa Fe High.

But according to the school district, he was never there.

Lindsey Campbell, a spokeswoman for Santa Fe Independent School District, said it had no record of anyone named David Briscoe being employed by the district in any capacity and that the district is confident no one by that name was on campus the day of the shooting last year.

“We are extremely disappointed that an individual that has never been a part of our school community would represent themselves as a survivor of the mass violence tragedy that our community endured,” said Santa Fe ISD Superintendent Leigh Wall. “This situation illustrates how easily misinformation can be created and circulated, especially when the amount of detailed information available is limited due to the still ongoing investigation.”

James Roy, a lieutenant for the Galveston County Sheriff’s Office — which helped investigate the massacre — said the shooting was contained to the art rooms and there were no English classes on that side of the school.

“The best I can tell, we have no record of [Briscoe],” Roy said. He added that the man’s claim that the shots were “very, very loud,” didn’t sound right.

“If he was anywhere other than that hallway [where the shooting took place], I don't think he could’ve heard anything but the fire alarm,” he said, referring to the alarm a teacher pulled as a warning to get people out of the school.

Public records show that Briscoe had a home address in Florida at the time of the shooting; there’s no record of him living in Texas at any time.

All four news organizations that quoted him removed any reference of David Briscoe from their stories after being contacted by the Tribune.

“I don’t know what motivates people to try to take advantage of a tragedy like this,” said John Bridges, the managing editor for the Austin American-Statesman, which also quoted Briscoe in an article shortly after the shooting. “It’s sick and it’s sad.

“Reporters can face significant reporting hurdles in the immediate aftermath of a tragedy,” he said, “and some people unfortunately attempt to take advantage of those situations and try to dupe reporters.”

It’s not uncommon for people to emerge after a high-profile disaster pretending to be a victim — often for financial gain, but sometimes simply for attention. Years after the 9/11 terrorist attacks, it was revealed that a Spanish woman who claimed to be a survivor of the attack was never there.

“Social media makes it easier for everybody to be fooled by people — regular people, journalists and politicians,” said Gina Chen, an assistant professor at the University of Texas at Austin’s School of Journalism. “People pretend to be other people for various reasons, sometimes nefarious and sometimes not.”

The man calling himself David Briscoe used social media to initiate contact with some reporters, including a Tribune reporter. When the Tribune asked to interview him again in early May, he initially claimed a rogue former employee for the social media company he said he started — whom he refused to name — had stolen his identity.

“I have never lived in Texas”

The man using Twitter handle @daviddbriscoe reached out to the Tribune in April, hoping to discuss his role as a survivor of the Texas tragedy as news reports circulated of survivors of a school shooting at Marjory Stoneman Douglas High School in Parkland, Fla. taking their own lives.

After the shooting at Santa Fe High, the man told the Tribune by phone, he became isolated and depressed and began drinking heavily. He said he never tried to contact any of the other survivors. At one point, he said, he contemplated suicide, and he told a reporter he was still struggling with depression. He said he spent a couple of months at his parents’ home in New Orleans immediately after the tragedy, then returned to the Houston area for a while to live with a friend before moving to Orlando, Florida — where he said he founded his social media company.

Credit: Texas Tribune
After the initial April 25 phone interview with the Tribune, the man calling himself David Briscoe went quiet until mid-May, when he responded to a direct message on Twitter.

He said he recently gave a speech at Colonial High School in Orlando, where the principal honored him and he talked to students and faculty about what he thought lawmakers could do to prevent another tragedy.

A spokeswoman for Colonial High School said no one named David Briscoe came to the school to speak.

Half a dozen Santa Fe survivors contacted by the Tribune also said they had never heard of someone named David Briscoe, and many wondered how he managed to snooker the media and grief-stricken survivors into believing his tale.

After the initial April 25 phone interview with the Tribune, the man calling himself David Briscoe went quiet until mid-May, when he responded to a direct message on Twitter.

He claimed he had never talked to the Tribune.

When he was shown the email account and phone number of the person who first contacted the Tribune, as well as screenshots of the initial direct messages, he claimed one of his employees impersonated him and had likely been the person who gave interviews with other media outlets. He added that someone — likely that same employee — stole his identity nearly a year before. He wouldn’t disclose the name of the employee in question “due to company policy” but said the person had been arrested.

Credit: Texas Tribine
During a subsequent exchange through Twitter in early June, he would only say that he was hesitant about giving a statement for this story.

During a subsequent exchange through Twitter in early June, he would only say that he was hesitant about giving a statement for this story.

“We do not want [to] be in the middle of all of this. Again, my identity was already stolen, I do not want to be potentially targeted again,” he said.

“I have never lived in Texas,” he said. “I have only lived in Florida. I’ve been living here practically my whole life.”

After that conversation, his direct messages were disabled and phone calls went to voicemail.

Some of the publications that quoted him say they are taking steps to avoid a similar incident.

“We have removed him from the piece, and we apologize to our readers for the misinformation,” said Steve Severinghaus, a spokesman for The Wall Street Journal. “We are reviewing how this error was made and will take steps to safeguard against this in the future.”

Bridges, the Statesman managing editor, said that a reporter from his publication first initiated contact with David Briscoe last year after seeing his social media posts — made from the same account through which he first made contact with the Tribune — about the shooting. Those posts have since been deleted, Bridges said.

“The school obviously was in no position to verify employment in those moments immediately after the shooting,” Bridges said.

“Reporters in breaking news situations attempt to verify sources and information as much as they can — and we made reasonable attempts as we were reporting in the minutes after the shooting,” Bridges said.

In recent days, Bridges added, a reporter from the Statesman attempted to initiate contact with David Briscoe to verify his initial claims.

But the man had blocked the reporter from his account and denied that he ever portrayed himself as a shooting witness.

Disclosure: The University of Texas at Austin has been a financial supporter of The Texas Tribune, a nonprofit, nonpartisan news organization that is funded in part by donations from members, foundations and corporate sponsors. Financial supporters play no role in the Tribune's journalism. Find a complete list of them here.

RELATED: Mass shootings have created a community forged by heartbreak and trauma