'I keep a pistol, and I grabbed it': Pearland couple survives attack from hammer-wielding burglar

David and Lisa DeHoyos say the attack was random, and they'd never met the suspect before. During the attack, David shot the alleged burglar. All three survived. 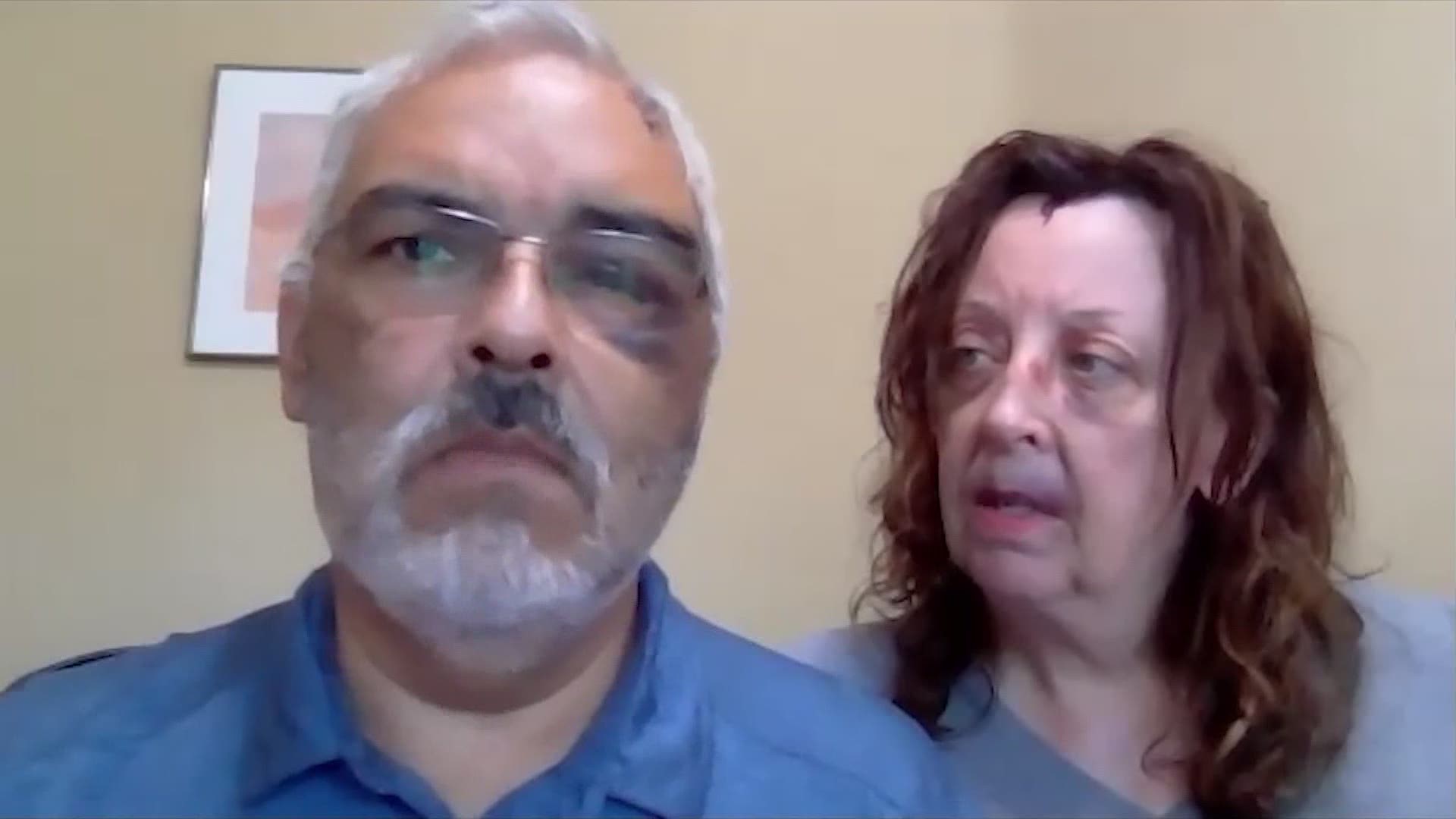 PEARLAND, Texas — It is the stuff horror movies are made of; a family says they were randomly attacked in their home by a man with a hammer.

The Pearland Police Department has identified the suspect as Robert Hebert.

The attack happened inside a historic Pearland home on the 2200 block of North Houston Avenue about 10:30 p.m. on April 17.

David and Lisa DeHoyos had just gone to bed when they heard a cinder block bust their a downstair window.

“I heard a commotion going on downstairs, and I thought, well, that’s more than our two cats,” David DeHoyos said. “I have a firearm...I keep a pistol, and I grabbed it.”

It’s the stuff horror movies are made of. A Pearland family says a stranger broke into their home and attacked them with a hammer. One of the victims shot the suspect. Everyone survived. I spoke to the homeowners... hear their incredible story on #khou11 at 10. pic.twitter.com/8otiOt0fiJ

“Then we struggled. He was taller than I was. When we were face-to-face, chest-to-chest and just doing that dance, I stuck the pistol in his side, and I pulled the trigger three times.”

At some point during the struggle, Lisa DeHoyos ran into the room, saw her husband in danger and tried to help. She was hit in the head twice with the hammer.

“There was no hesitation to try to step in between what was happening,” Lisa DeHoyos said.

The couple says they don’t remember much else. David DeHoyos was able to get help, and when police arrived, Lisa and David DeHoyos were taken to the hospital by ambulance, as was the suspect.

David and Lisa DeHoyos spent several days in the hospital recovering. Lisa DeHoyos says she suffered bleeding on the brain, brain swelling, a pierced eardrum and several other injuries. She has several lacerations that have been stapled together.

David DeHoyos also has several injuries including a broken orbital bone in his face which might result in permanent damage to his eyesight. This injury is very concerning to him, as he depends on his sight for his job. David DeHoyos has been employed in NASA’s photography department for more than 30 years.

Hebert has been charged with two counts of aggravated assault with a deadly weapon and one count of burglary. As of Tuesday night, court documents show he remained in jail on $575,000 bond.

“We are an example of just people that were living our lives and had no idea this was going to be what our life was like," David DeHoyos said.

Both David and Lisa DeHoyos credit God for getting them through the terrifying experience, along with their dedication and love for each other.

“We are still lovebirds at 12 years (married),” David DeHoyos said. “She is my world. She is my everything.”

“I love him with all my heart,” Lisa DeHoyos said. “He is the best thing that has ever happened to me.”

Both Lisa and David DeHoyos will need continued medical care going forward and believe they will seek counseling as well to help them deal with any long term emotional impacts.

“It’s just surreal that it happened to us, so randomly,” David DeHoyos said. “Will I be jumpy? Will I be constantly looking over my shoulder? Will I be able to sleep? I don’t know.”

“You would hate to have a trauma like this,” Lisa DeHoyos said. “But it gives you an insight that you would never have otherwise into how many people are there for you.”

The DeHoyoses say they don’t know why they were targeted or what the suspect even wanted, but they did find out they would fight for each other’s lives without a second thought.

“We absolutely know that it was God that got us through this,” Lisa DeHoyos said.

“Hug your kids. Hug your husband. Hug your wife,” David DeHoyos said. “Life is precious, and we are not promised tomorrow.”

Lisa and David DeHoyos have a long road to recovery and mounting medical bills. Their family has set up a GoFundMe account for anyone who’d like to help.