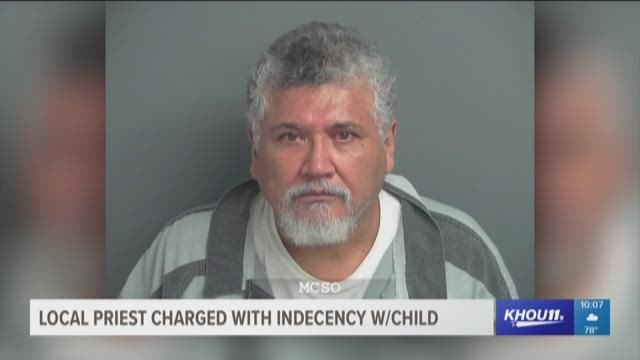 RICHMOND, Texas — The priest of St. John Fisher Catholic Church in Richmond, has been charged with four counts of indecency with a child, according to the Conroe Police Department.

The alleged abuse happened at his previous parish, the Sacred Heart Catholic Church in Conroe.

In Richmond on Wednesday, both current and former St. John Fisher parishioners took the news of La Rosa-Lopez’s arrest hard.

Two former members agreed to share their experiences with the church on the condition of anonymity. We will refer to them under the pseudonyms, “Jane” and "John."

“You’re angry because those are things that should have come to light a long time ago,” said John.

Jane and John attended St. John Fisher for most of their lives and say that although La Rosa-Lopez baptized their children and even blessed their home, they didn’t feel comfortable with him at the helm and eventually left.

“It was unsettling,” explained John, “like, the vibe he put out. It just felt odd.”

The say both their families are still very active members and that the allegations have been extremely difficult for their families to come to terms with. Jane says the news put her grandmother in the hospital with chest pain.

“We were trying to calm her down saying, ‘It’s going to be OK.’ But she’s actually admitted and they are keeping her overnight,” Jane says.

Both Jane and John say they don’t understand why no one in the church was told about La Rosa-Lopez’s history.

“This should have been information provided before he arrived,” said John, adding that he feels the Archdiocese chose to protect the priest and not the parish.

“It was somebody that you went to for guidance. Whether it was through your confession or through trying to strengthen your faith. Then come to find out that behind closed doors his sins… his secrets are darker than yours.”

The Archdiocese claims the allegation made in 2001 was immediately reported to Child Protective Services at the time. However, the girl’s parents did not want to pursue it.

The Archdiocese also said any incident of abuse won’t be tolerated and plan on fully cooperating with the investigation.

As of Wednesday night, La Rosa-Lopez, was in the Montgomery County Jail. His bond has been set at $375,000.