The suspect's attorney admits it's his client seen with the tiger in a viral video but denies that it belongs to him. 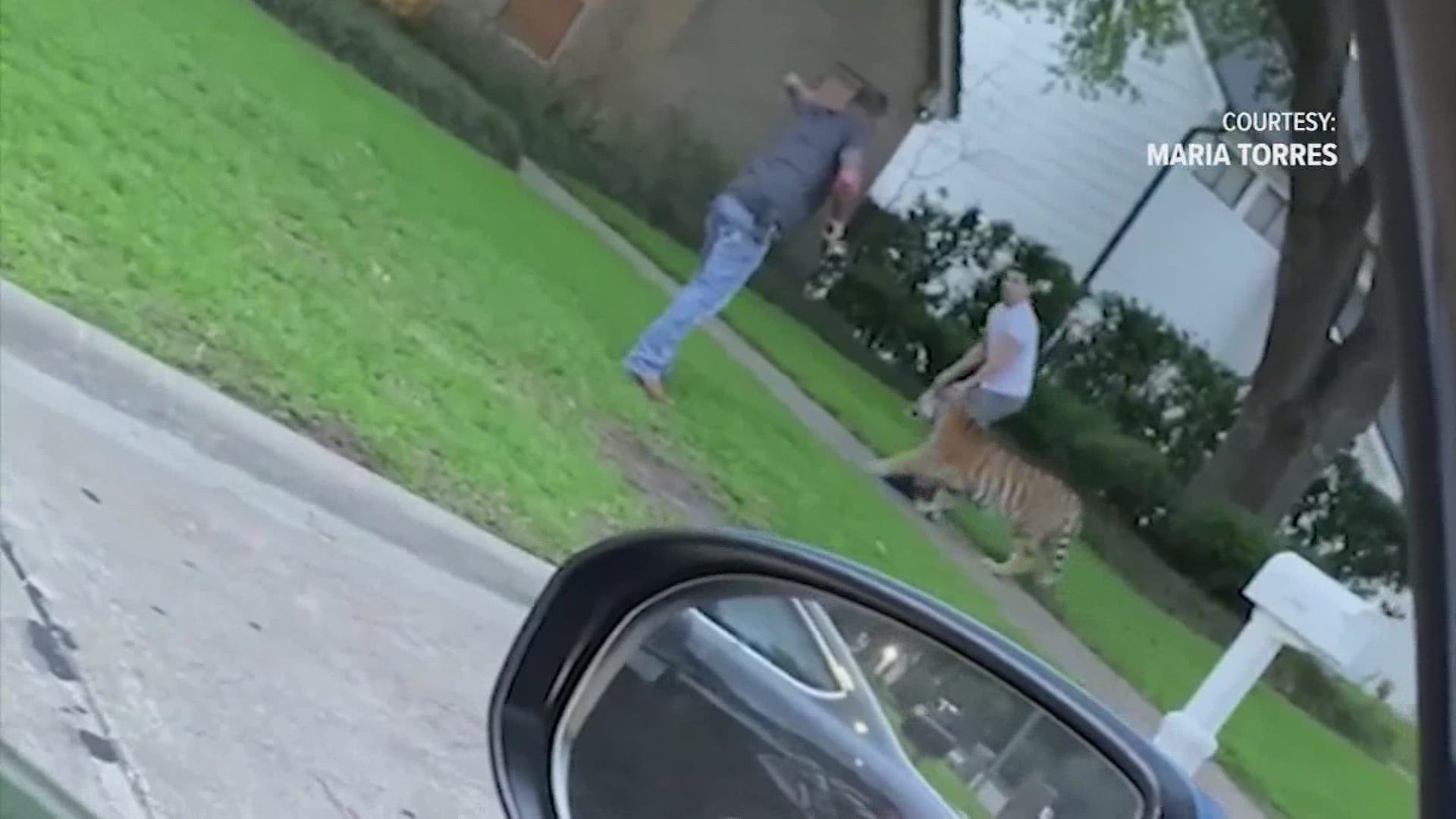 HOUSTON — The man at the center of the tiger investigation in a west Houston neighborhood remained in custody as of Tuesday, records showed.

A new mugshot has been released, but the tiger's whereabouts have not been disclosed. We have, however, learned a little more about the animal from the suspect's attorney.

Victor Hugo Cuevas, 26, is currently booked in the Fort Bend County Jail. He is the man seen in a viral video ushering a tiger back into a Houston home in the Memorial area over the weekend.

His attorney said the tiger in question is nine months old, and its name is India.

On Tuesday afternoon, the Fort Bend County Sheriff's Office also issued a brief statement about the suspect's arrest and past charges, even as the investigation into the Houston tiger incident continued.

FBCSO stated it was about 7:30 p.m. Monday when deputies assisted the Houston Police Department with the suspect's arrest in the 24300 block of Bella Veneza Drive. Cuevas had a warrant for evading arrest, authorities said.

Cuevas was also previously charged with murder in connection with a shooting in Fort Bend County. That shooting happened the evening of July 14, 2017 at a shopping center in the 5600 block of W. Grand Parkway. Bond was set at $750,000 for that case, and Cuevas was arrested two weeks later at an airport when returning from Mexico. He bonded out.

In November 2020, Cuevas was arrested again for bond revocation, according to Fort Bend.

"The investigation remains open and FBCSO has no additional information to release at this time," stated FBCSO.

He doesn't own the tiger, attorney says

Cuevas' lawyer on Monday afternoon said his client is not the owner of India the tiger that was spotted in a west Houston neighborhood Sunday and claimed HPD rushed to judgment.

"HPD was in such a hurry to wrap it and find their guy that they just assumed because my client was the one who caught this tiger, who went out and go it and brought it back into safety, everyone is just assuming that he is the owner of the tiger," attorney Michael Elliott said.

Watch: 'It's not his tiger' | Attorney for suspect at center of tiger investigation gives updates

Elliott said police are also assuming that Cuevas was the person who put the tiger in a white Jeep Cherokee and drove away.

"He's already been convicted, which is a shame," Elliott said.

He was going to surrender, attorney says

Elliot said he and Cuevas made an agreement to surrender at 8:15 p.m. Monday, but HPD arrested him 15 minutes earlier anyway.

While the attorney denies Cuevas owns the tiger, he did admit that his client is the man seen in the video bringing the animal back into the Memorial-area home. Multiple videos showed the animal in yards and crossing the road in the neighborhood before an off-duty deputy arrived to help.

That deputy yelled at the big cat and Cuevas as Cuevas begged the deputy to not shoot the cat.

Also watch: 'This is about a tiger' | Houston 911 dispatchers react to calls about tiger in neighborhood

Eventually the cat was taken inside and was not seen on video again.

Suspect has info on the tiger

Cuevas has information on the animal's owner and where the tiger can be found, his attorney said. His attorney also said Cuevas is speaking with investigators, but the details about what information has been provided to authorities has not been released.

Houston police arrived at the home where the tiger was spotted Monday morning to question Cuevas, but they said he loaded the Bengal tiger in a white Jeep Cherokee and took off. There was a brief chase, but they lost him, according to HPD Commander Borza.

Cuevas faces an evading arrest charge and his bond on the murder charge will be revoked, Borza said. A hearing has been set for 10 a.m. Friday on the matter, Fort Bend County officials said.