Houston Police Chief Art Acevedo said the 18-year-veteran will likely face federal charges after taking part in the riot at the U.S. Capitol.

A Houston police officer accused of being part of the mob that stormed the U.S. Capitol has resigned, according to HPD Chief Art Acevedo.

We are not naming the officer because he hasn't been charged, but Acevedo said Wednesday he will likely face federal charges.

The chief said he received a tip Sunday that one of his officers stormed the Capitol.

After checking his Facebook page, Acevedo confirmed the officer attended the rally, which the chief said is his constitutional right. But a joint investigation with the FBI later found the officer was part of the mob that stormed the Capitol, according to the chief.

“There's no excuse for criminal activity – especially from a police officer," Acevedo said. "I can't tell you the anger I feel at the thought of a police officer or other police officers thinking they get to go storm the Capitol; or any member of the military or members of the Secret Service."

The suspect is a patrol officer and 18-year veteran of HPD.

"As an American, when I saw the confederate flag in the Capitol -- in the rotunda -- that angered me. And the thought of off-duty police officers particpating in that, I can't tell you what that does to me."

This news comes on the heels of another federal investigation into Bexar County Sheriff’s Office Lt. Roxanne Mathai for her role during the Capitol riot, the Texas Tribune reported.

Mathai posted a series of images on Facebook showing her draped in a Trump flag inside the Capitol, according to reports.

“Not gonna lie.....aside from my kids, this was, indeed, the best day of my life. And it’s not over yet,” Mathai wrote on Facebook.

Sheriff Javier Salazar said he sent screenshots to the FBI and launched an internal affairs investigation.

But her attorney said she didn't know about the violence inside the Capitol.

Two off-duty Rocky Mount, Virginia police officers were also arrested on Wednesday. Jacob Fracker and Thomas Robertson are each charged with one count of violent entry and disorderly conduct on Capitol grounds and one count of knowingly entering or remaining in any restricted building or grounds without lawful authority.

The FBI is working round-the-clock to identify all of the suspects who breached the Capitol.

Five people, including a Capitol police officer, died during the chaos.

The @houstonpolice officer in question tendered his resignation this morning. The Department will release his name upon the conclusion of our joint ongoing criminal investigation with @FBI and @TheJusticeDept. https://t.co/5HlwgGuIJf

Thank you for your tips! The #FBI & our partners have arrested multiple ppl in connection with violence at the US Capitol last week. We still need the public to help us identify individuals. If you know someone on one of these posters, submit a tip at https://t.co/NNj84wkNJP. pic.twitter.com/mMhwR4kALL 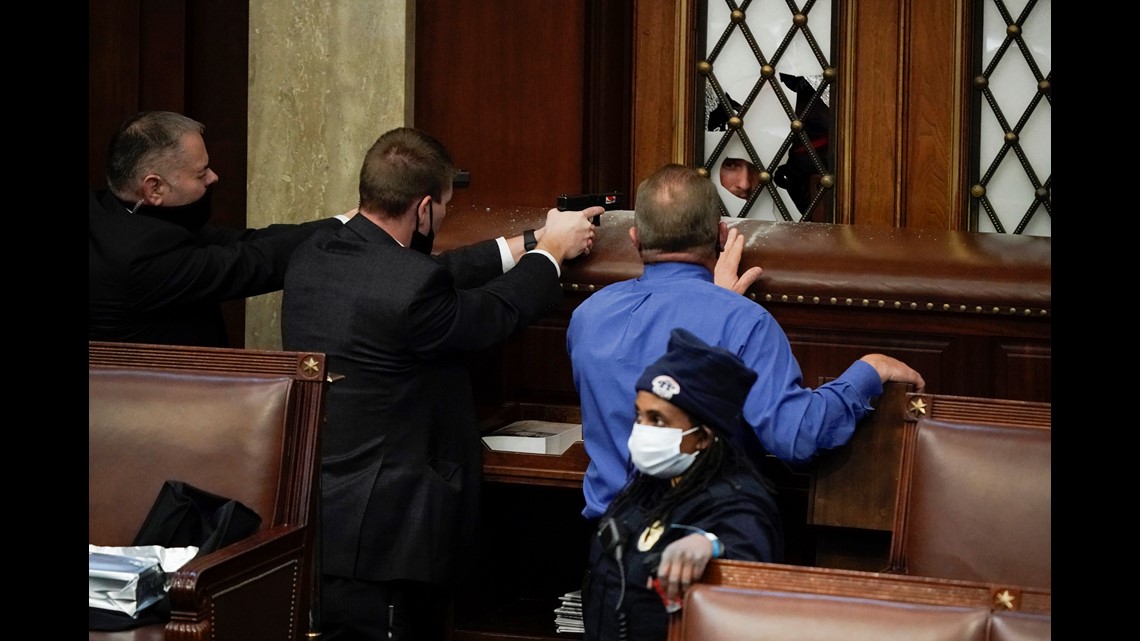 PHOTOS: US Capitol stormed by pro-Trump mob
Pro-Trump rioters stormed the US Capitol as lawmakers were certifying the Electoral College. One woman was killed and several arrested.