Court documents unsealed Wednesday detail how a Houston mother took her 8-year-old son to Brazil to attend her brother's wedding. She promised to return, but never did. 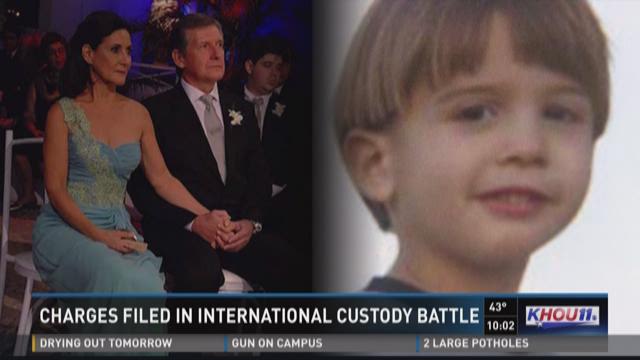 Chris Brann remembers the day his son Nico was kidnapped by his ex-wife Marcelle and taken to Brazil.

"This July it will be five years," said Brann. "Every day since has been a fight to get him back."

That custody battle now back in the headlines. Wednesday morning the FBI arrested his ex-wife's parents Carlos and Jemima Guimaraes as soon as their flight from Brazil landed in Miami.

"I think they're utterly shocked," said Brann, a Houston physician.

His former in-laws are charged with International Parental Kidnapping and Conspiracy.

"Not only did they facilitate it, but they planned it," said Brann. "This was a premeditated abduction. We now know that beyond a shadow of a doubt."

Court documents unsealed Wednesday detail how Marcelle took Nico to Brazil to attend her brother's wedding. She promised to return, but never did. And it was her parents who helped her establish permanent residence in Brazil, going as far as buying return plane tickets "to create an illusion that she would be back to the U.S" with Nico.

"This entire event has occurred because they lied about what they were going to do," said Brann.

So Brann has had to watch Nico grow up from a distance, making trips as often as possible to Salvador Brazil.

"I live for those moments," said Brann.

Those visits are always supervised by armed guards hired by his former in-laws, the very couple that is now facing charges in the United States.

"This is the most hope I've had since the beginning," said Brann.

Brann has since remarried and eight year old Nico has a new baby brother. This father now hoping he's one step clsoer to having both his sons together in Houston.

"I want my son to know that I fight for him every single day and that he is loved," said Brann. "I'm doing everything I can to protect and to make sure he can have a normal life as possible in this situation."

Carlos and Jemima Guimaraes are both due in federal court in Miami on Monday. Brann is hoping the judge does not allow them to be released on bond. If convicted, they could each get up to eight years in in federal prison.

With her parents in custody, Brann hopes his ex-wife will want to start serious discussions about returning Nico. A Texas judge granted him the right to decide where Nico should live, but the Brazilian courts have so far ignored it.

"My hope, pure and simple, is that Nico comes home, that we can make amends, that we can move on with our lives, and that Nico will have equal access to both parents in his life because that's what he deserves," Brann told CBS News.