From the opening shotgun blast to the getaway, three robbers’ assault inside Todo Supermarket lasted just 56 seconds, according to surveillance video shown inside the southeast Houston store. 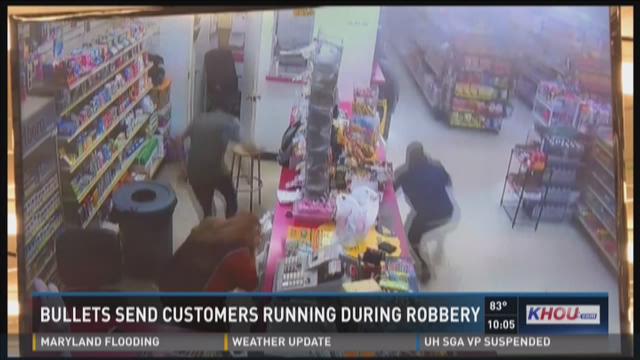 Four months ago, someone put a gun in the clerk’s face and stole money. That clerk considers it nothing compared what happened inside the store Friday night.

From the opening shotgun blast to the getaway, three robbers’ assault inside Todo Supermarket lasted just 56 seconds, according to surveillance video shown inside the southeast Houston store.

For survivors who dodged high-caliber, bulletproof-glass-shattering bullets, the crime is a never-ending nightmare.

“I thought I (was) dead,” said Noor Kadiwala, one of the clerks and victim.

“The fact that these guys are just coming in there like the Old West, guns blazing, means they really don’t care about anything at this point,” said customer Lindsey Yanez. “It worries me.”

Friday night, Kadiwala and his co-worker were cashing out customers when a dark colored Mitsubishi SUV pulled up and three armed masked men in all black got and aggressively entered the store.

Shots fired into the ceiling frightened everyone inside. Customers dove face down on the ground. The two clerks raced robbers to the store’s security room, where the safe is stored.

“It was about like another second (after me and my co-worker closed the door) and (the robbers) would have gotten inside,” Kadiwala said.

Instead, Kadiwala locked all three robbers out. Surveillance video shows their frustration. The men knocked, kicked then tried to shoot their way inside.

“It’s hard to tell you what I was feeling at that time cause I wasn’t thinking about anything,” Kadiwala said. “I was just right there the whole time and they kept saying, “Open the door,” and shooting at the door.”

The robbers stole a cell phone and wallet from two customers then left, according to Houston Police. None of the suspects are in custody. Investigators need help catching the shooters. Anyone with information should call Crime Stoppers 713-222-TIPS.

Still, the only thing take from Kadiwala was his peace of mind.

“(The store clerks) have been real good to us and for something like this to happen, it’s tragic,” said Carlos Brown, a longtime customer.

Kadiwala can’t help but look at damage around the store and wonder “what if.”

“I just thank God he saved our life,” he said. “People say it was the door. I say it was a miracle, (because) even after several shots on the door, the door didn’t open.”