Carlos and Jemima Guimaraes are out on bond after they were accused of kidnapping their grandson and taking him to Brazil. The couple will be back in federal court in early May. 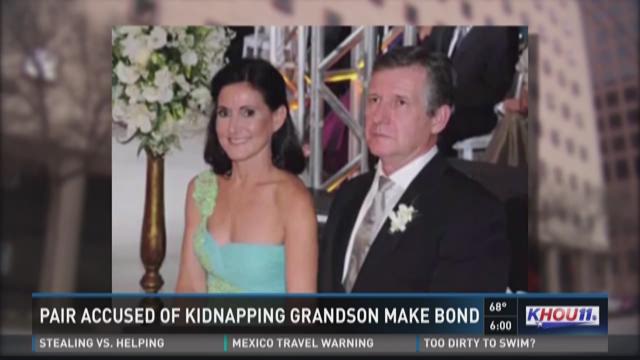 Grandparents accused of kidnapping their grandson and taking him to Brazil are out on bond.

Carlos and Jemima Guimaraes had nothing to say as they left the federal courthouse.

Each is out on bond as their kidnapping and conspiracy cases proceed.

“They have a GPS monitor, they’re under a curfew, they each had to pay a million dollars cash deposit with the court,” said attorney Jimmy Ardoin.

The millionaire couple are accused of helping their daughter, Marcelle, kidnap her now-8 year-old son in 2013.

He remains in South America with his mother, who was also indicted.

The Guimaraes’ were arrested when they returned to the states for another grandchild’s birthday.

“My child has been through horrific amounts of emotional trauma because of this,” said father Chris Brann in an earlier interview.

Brann is trying to sort out the custody ordeal with his ex-wife while the court case against his son’s grandparents continues.

“Hopefully, we’ll be one step closer to getting my son back,” said Brann.

Both Brann and federal prosecutors had concerns that his former in-laws are flight risks.

But that’s something their attorneys dispute.

“These people want to set the record straight, get their side out, and they want to get their reputation back,” said attorney Rusty Hardin.

The couple will be back in federal court in early May.

Brann told us after the bond decision that he hopes everything has a peaceful resolution.

He’s currently prevented from visiting his son in Brazil because he could face arrest for allegedly not paying child support.