"Defendants in Harris County may have the ability to evade electronic supervision by simply failing to pay their GPS vendor," DA Kim Ogg says.

HOUSTON — It’s been nearly three years since Hugo Garcia’s father, Enrique, was shot and killed during a robbery that was caught on camera while he was on the job.

“He worked as a security guard all of his life,” Garcia said. “His life was tragically taken.”

Despite a capital murder charge, accused killer Clint Walker was given a $100,000 bond this summer. That was enough to anger Garcia. Then he found out the GPS ankle monitor Walker was required to wear was removed when Walker failed to pay a monitoring fee that’s a condition of his bond.

“It’s a concern to me and it raises multiple flags as to answers that I need,” Garcia said.

Ogg raised her own concerns in a forceful letter to court officials. She called the situation a “troubling loophole” because Walker was unmonitored for two weeks until HPD arrested him on Wednesday.

“We have identified approximately 173 cases where individuals are out on bond for murder,” said First Assistant District Attorney David Mitcham. “And if they are required to wear a GPS device, we want that condition of bond maintained. And we have notified the proper authorities to look into this matter to make sure this is not a widespread problem.”

It is not a widespread problem, according to the Harris County Community Supervision & Corrections Department. It blames a contractor called Guarding Public Safety for removing Walker’s monitor without the department’s permission.

That’s something that violates the company’s agreement with the county.

“The vendor was immediately terminated because of serious violations of the memorandum of understanding,” said HCCSCD Director Teresa May.

May said it’s the first time she’s known of this happening in the 20 years she’s worked in the field.

Hugo Garcia told us he hopes it’s the last.

“Who is watching these people that have prior records and are allowed to roam the streets?” Garcia said.

A lot of people on social media wonder why suspect Clint Walker was given bond in the first place. The DA’s office said that’s the sole discretion of judges and the court system.

May said she's never seen this happen in 20 years and does not believe a loophole exists. She said the ankle monitoring vendor, or contractor, should not have removed monitor because Walker didn’t pay.

She also said the Department of Community Supervision should be contacted before that ever happens.

“(The) vendor was immediately terminated because of serious violations of memorandum of understanding," May said.

May said the defendants monitored by Guarding Public Safety have been transferred to other companies.

Walker was told to report to supervision but did not, May said. He had his bond revoked, she said, and there's no indication that he committed any other criminal acts while on bond.

"Under the Canons of Judicial Conduct, a judge shall abstain from public comment about a pending or impending proceeding which may come before the judge's court in a manner which suggests to a reasonable person the judge's probable decision on any particular case.

"However, it is part of the public record in this matter involving the GPS monitor of defendant, Clint Walker, (Cause no. 1539105), that a motion to revoke his bond was filed September 23, 2019, and the Court granted the motion the same day. Also, that same day the Court issued a capias for Mr. Walker's arrest. Mr. Walker was taken into custody Oct. 2, 2019." 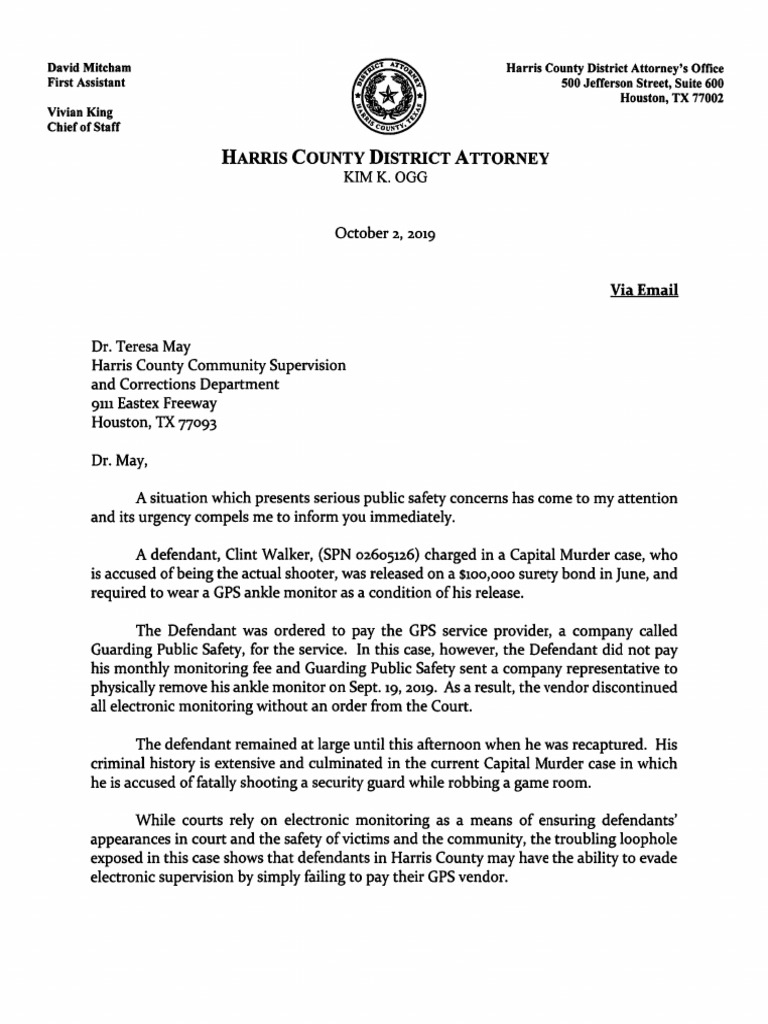