Britney and Jimmy Hall's home has been hit twice by celebratory gunfire this year -- once on Fourth of July and then again on Christmas night. 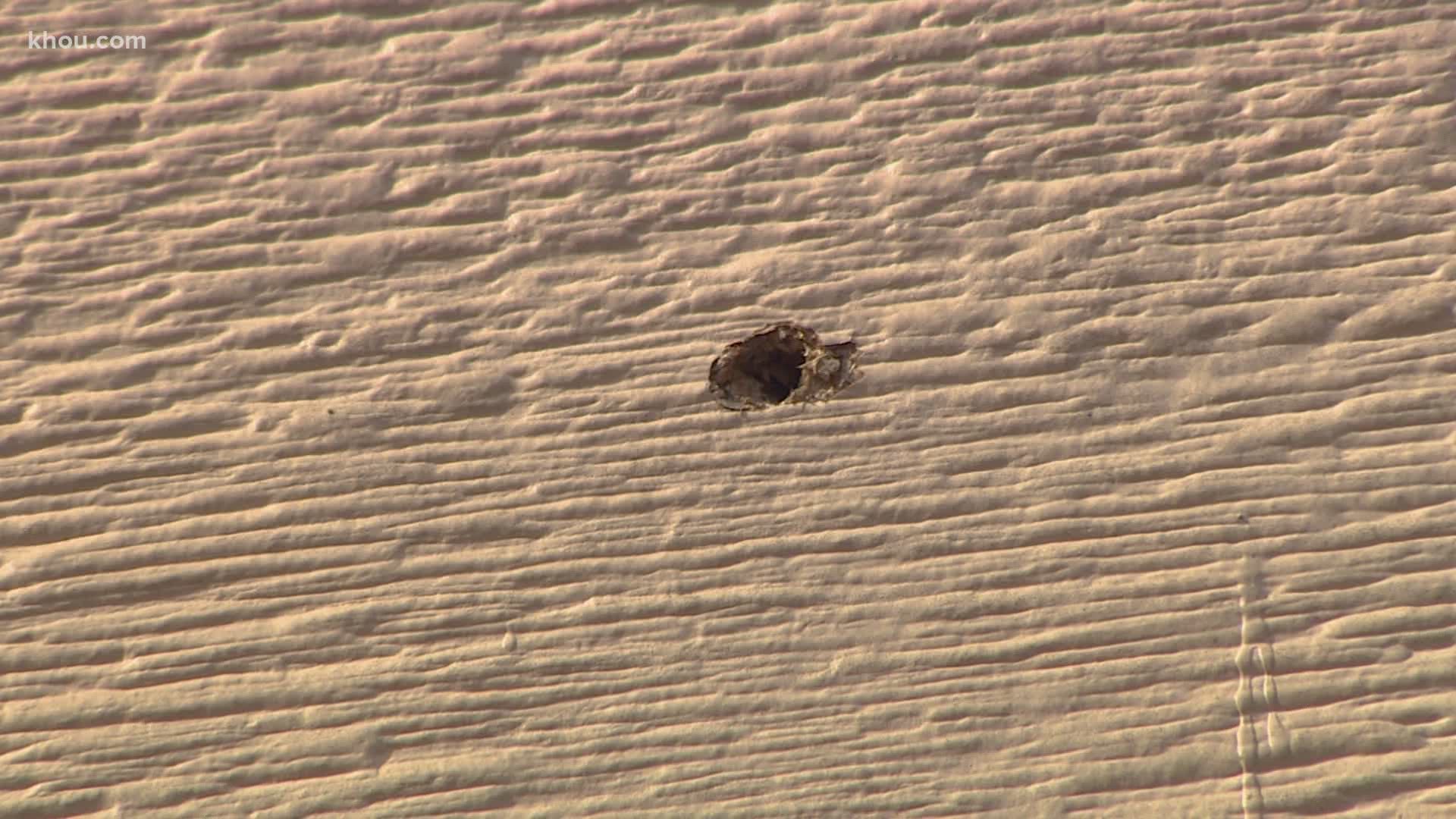 HARRIS COUNTY, Texas — Britney and Jimmy Hall have had enough.

“These bullets that you shoot in the air, they go somewhere and unfortunately my house has been the catching mitt twice,” Britney said.

The first time their home was hit by celebratory gunfire this year was on Fourth of July. At first, the family thought it was just neighbors popping off fireworks.

“The next thing you know you hear this bang and it’s, you’re just like ‘what was that?’” Jimmy Hall said.

It was bullets ripping through their walls on the second floor.

Then on Christmas night it happened again.

“There was a hole in the window from where one bullet hit and that bullet went across my workstation desk and out through the door,” Britney said.

Another bullet pierced through the sheetrock of two rooms, grazed the ceiling of their son’s bedroom and landed on the window sill, just feet from his bed.

The family believes the shots are coming from the woods behind their home near West Montgomery Road and Highway 249 in northwest Harris County.

“It was a very scary moment to think that if any of my children were in that room at one time, if anyone stood up, they could have been hit by a stray bullet,” Jimmy said.

Last New Year’s Eve, a stray bullet killed Phillipa Ashford, a nurse who was celebrating the holiday outside with neighbors.

RELATED: Texas lawmaker pushes for change after being shot in head by celebratory gunfire

Thinking of Ms. Ashford. Participating in celebratory gunfire may seem like harmless fun but last New Year's Eve showed just how dangerous the activity can be. It's illegal...and can be deadly. It can also https://t.co/4qtFGGXtAG

It was a night when the Harris County Sheriff’s Department received 184 calls about celebratory gunfire. Houston Police also received 297 calls, and an HPD spokesperson said many claimed the shots were coming from “an unknown area nearby.”

That lack of hard leads often makes it difficult to work up criminal charges.

KHOU 11 Investigates analyzed Harris County criminal data from September 2015 to September 2020 and found only 43 cases of “discharging a firearm in the metropolitan area.” Celebratory gunfire also may result in reckless conduct or deadly conduct but a Harris County District Attorney’s Office spokesperson said the agency does not track that specific data.

Houston Police Chief Art Acevedo said the department will be deploying teams to arrest those engaging in the potentially deadly conduct.

“Please do not risk seriously wounding or killing someone by engaging in this reckless behavior,” Acevedo wrote in a recent Tweet.

The @houstonpolice Dept. will be deploying teams to arrest individuals engaging in this deadly conduct. Please do not risk seriously wounding or killing someone by engaging in this reckless behavior.#RelationalPolicing https://t.co/Mh9DnpC9EM

“That behavior is unacceptable and it’s deadly and you will be arrested,” echoed Harris County Sheriff Ed Gonzalez.

Law enforcement also will be monitoring social media. Last year, a man was arrested after a Facebook video showed him shooting his gun in the air.

As for the Hall family, they hope ringing in the new year will not mean a third round of bullets flying into their home.

“Please put the guns down,” Britney Hall said. “Because no one wants to go into 2021 having to bury a relative from a stray bullet.”