The estranged wife of a man accused of shooting an HPD officer to death and wounding another issued a statement a day after the deadly incident. 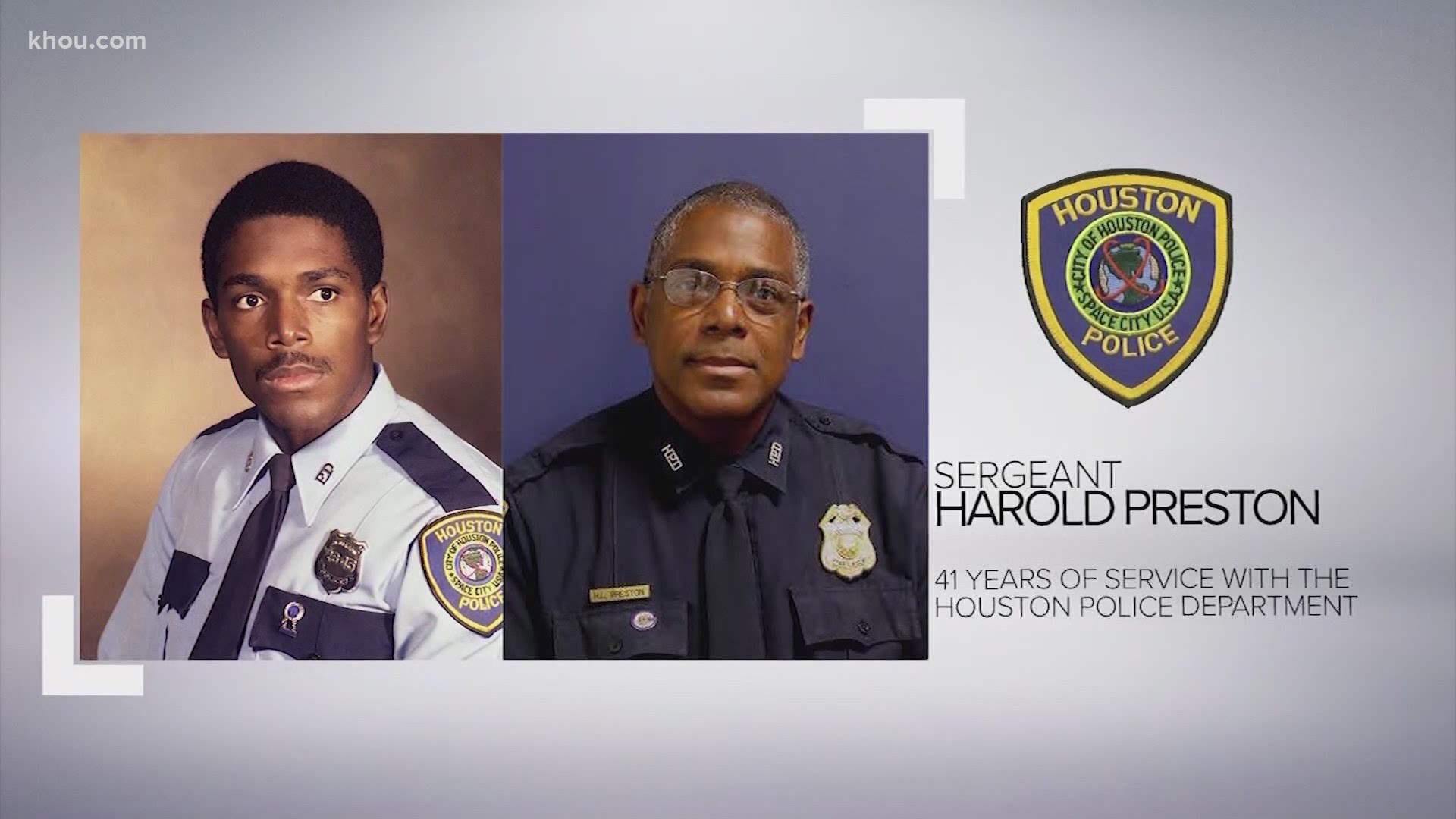 HOUSTON — The estranged wife of the man in custody who is accused of shooting one Houston police officer to death and wounding another issued a statement one day after the deadly incident at an apartment complex on Holly Hall.

She said if it wasn't for Sgt. Harold Preston's heroics, she would be dead.

"I pray that he rests in heaven, because if it were not for him, I know I would have been killed," she said. "He saved my life. He is a hero. He died protecting me and my family."

Preston and officer Courtney Waller responded to a domestic violence call at an apartment complex in the 2600 block of Holly Hall just before 8 a.m. Tuesday. They spoke to the estranged wife in the parking lot for about an hour before her son came out of the apartment and told them that his father had a gun. That's when police said Elmer Manzano opened fire, shooting both officers.

Preston, 65, was taken to an area hospital and was surrounded by family members when he died. He was a police officer for 41 years. Waller is expected to survive.

If you would like to get a card to the family of @houstonpolice Sgt. Harold Preston or to Officer Courtney Waller, you can leave it on this HPD unit outside the SW patrol station or you can drop off at @HPOUTX where officers will personally deliver your note. #khou11 pic.twitter.com/tJqmixTU0V

Manzano's estranged wife said Preston was very helpful and kind during the incident.

“I want to say thank you for the outpouring of support for my son and I. I also want to thank the officers of the Houston Police Department, especially the officers who came to help me," the estranged wife said. "To the family of Sgt. Preston, I want to offer my sincerest condolences. He helped me a lot. He was very kind."

During the incident, Manzano was shot in the abdomen, and his 14-year-old son was also shot. Police said Manzano surrendered just before 10:30 a.m. The boy is expected to be OK and Manzano is expected to survive.

“Definitely a giant of a human being. A trailblazer,” Hutchinson said of the veteran officer who joined HPD in 1979. “He saw it all. He saw when African-Americans weren’t even allowed to promote at the police department.”

Preston leaves behind a 23-year old daughter, his fiancé and his elderly parents.

“I love this family. They are resilient,”  Hutchinson said. “Their faith is going to get them through this.”

They thanked the night shift officers who stayed late, officers from other patrol divisions who’ve come to help, and peer support who led everyone in prayer. #RIPSgtPreston pic.twitter.com/aYrmoAaYd7

The estranged wife said her situation is a prime example of what many domestic violence victims go through regularly. She had a message for those victims, as well.

"To women who are experiencing domestic violence, don’t let the abuser intimidate you. Call the police and seek help," she said. "My kids were in danger, so I called for help. And I want to thank everyone for their prayers as our family begins to recuperate and begins to heal.”

.@HarrisCountyDAO has charged Elmer Manzano, the man arrested in connection with the shooting of two @houstonpolice officers yesterday, with capital murder, according to court documents. @KHOU #khou11

“We go to work and put our lives on the line on a regular and a consistent basis,” Hutchinson said. “So yes, please, ma’am, please, sir, go the extra mile. Do something. Not only say a prayer, but also send a card, sow a seed. Encourage that officer. Because we don’t get a day off. We have to get back out there and we have to continue to do our job.”