According to a court document, the DA's office believes Sanchez intentionally caused Jennifer's death but it doesn't state how it happened. 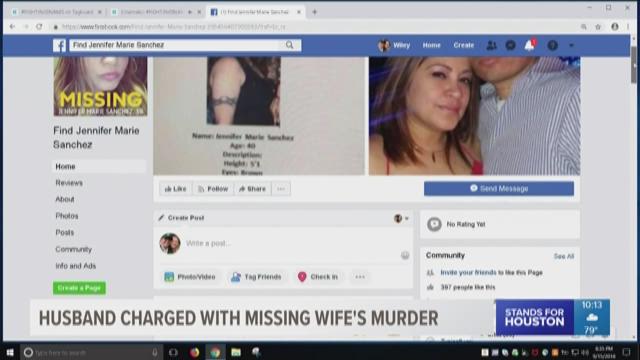 HOUSTON — The estranged husband of a missing Houston woman is in jail charged with capital murder.

Jennifer Sanchez has been missing for more than a week and authorities believe he killed her.

Joey Sanchez’s mug shot has not been made public.

While his wife’s body is still missing the Harris County District Attorney’s Office believes there is enough evidence to charge him with her death.

Equusearch has been canvassing the area south of Martin Street near Shephard Drive in north Houston looking for clues that may lead them to Jennifer.

Frank Black, church coordinator for Equusearch, said volunteers are working with investigators to figure out where to search.

Black said the couple was separated and Jennifer had a restraining order against Sanchez.

Sanchez was arrested on Wednesday but was charged with capital murder on Saturday.

According to a court document, the DA’s office believes Sanchez intentionally caused Jennifer’s death but it doesn’t state how it happened.

The document states it may have been an act of retaliation.

Sanchez does have a criminal past.

In 1996 he was convicted of aggravated assault with a deadly weapon.

Jennifer’s family and friends were unavailable for comment but they have created a Facebook page called “Find Jennifer Marie Sanchez”.

At the moment there is no information as to if a body has been found or why authorities believe Sanchez is responsible for Jennifer’s death.

Anyone with any information that can help investigators is urged to call Houston Police.