The victim and suspect had been in a relationship according to a college classmate. 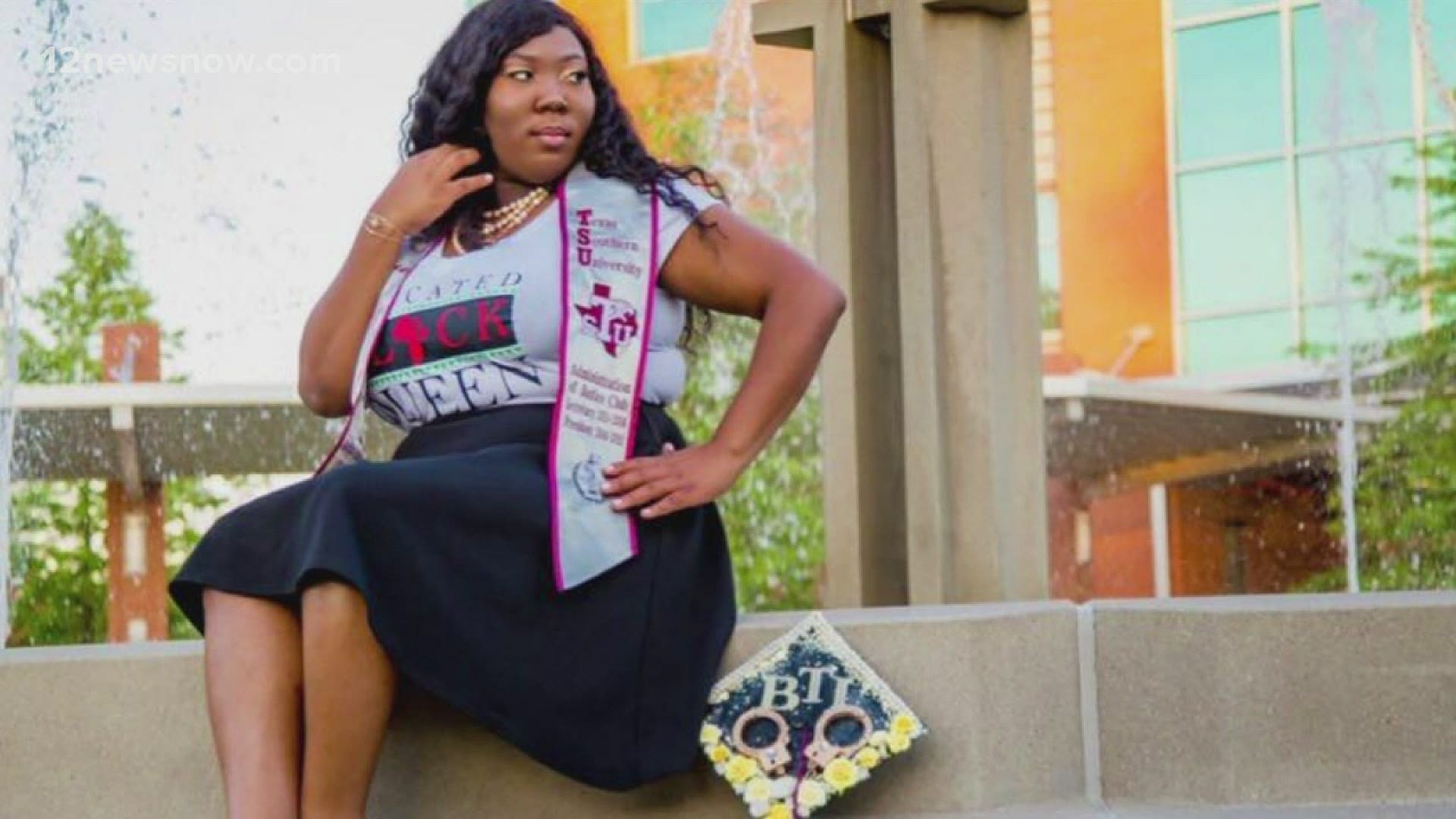 BEAUMONT, Texas — Briana Johnson, 28, of Houston has been identified as the woman who troopers found dead in the trunk of a car, after a high-speed chase into Beaumont Saturday morning.

Victor Campbell, the driver, has been arrested and currently sits behind bars at the Jefferson County Jail. This all started Saturday morning when troopers tried to pull Campbell over.

(Editor's Note: A previous version of this story included information from an official about Campbell's bond amount. A spokesperson with the Jefferson County Sheriff's Office confirmed to 12News he is held without bond on Nov. 30.)

Investigators say he refused to stop then took off into Beaumont and eventually crashed. That's when troopers discovered the body of Johnson.

Tiffany Goodman is a former classmate of Johnson's. The two attended Texas Southern University together.

"It just doesn't seem that this type of incident would happen to her. To be found in a trunk of a car it was just so heartbreaking," Goodman said.

Goodman described Johnson as a person with a lot of confidence who deeply cared about others. The two crossed paths multiple times while attending college at TSU in Houston.

Goodman told 12News that Johnson and Campbell were in a relationship. Based on posts on social media, the two spent time in Galveston during the week of Johnson's birthday. Johnson's friends are left with questions now that her body has been discovered.

"It all looked good, but we never know what's going on in someone's household and I just don't know what was the cause behind her tragic incident," Goodman said.

Sunday, several Houston police officers searched a Houston home that is believed to be connected to her death, based on the evidence found at the crime scene in Beaumont.

Campbell faces multiple charges such as evading arrest, driving while intoxicated, tampering with evidence and abuse of a corpse.

The investigation is being led by the department of public safety, the Texas Rangers along with Houston Police and the Beaumont Police Department.

The family of Johnson has set up a GoFundMe account to go toward funeral expenses. They hoping get enough money to be able to afford to get her body sent back to her hometown in California.

Full news release from the Texas Department of Public Safety...

At approximately 8 a.m. today, Texas Department of Public Safety (DPS) Troopers received a radio communication about a reckless driver—operating a white passenger vehicle—traveling eastbound on I-10 from Chambers County.

A DPS Trooper observed a white Honda passenger vehicle traveling east at a high rate of speed. The Trooper activated the marked patrol vehicle's emergency lights to conduct a traffic stop near FM 365. The driver, later identified as 35-year-old Victor Campbell Jr. of Fresno, Texas, pulled to the right but immediately sped off without stopping.

Campbell continued eastbound on I-10 crashing near Milam Street in Beaumont. He was taken to a local hospital for treatment from injuries in the collision.

DPS investigators inventoried the Honda passenger vehicle (a recording of the vehicle's contents), which is standard procedure following a motor vehicle crash under these circumstances. Troopers found in the trunk of the Honda, a deceased female. She has been identified as 28-year-old Briana Teirra Johnson of Houston. An autopsy has been ordered by Justice of the Peace Ben Collins.

Victor Campbell Jr. has been taken to the Jefferson County jail following his release from the hospital. He faces charges for felony evading arrest, driving while intoxicated, tampering with evidence, and abuse of a corpse. Additional felony charges are pending as this investigation continues.

At this time, additional information is not available for release.

If you have information about this crime you could earn a cash reward of up to $1000 by providing an ANONYMOUS tip to Crime Stoppers of Southeast Texas.

Call 833-TIPS (8477) or download the P3Tips App on your mobile device to submit your tip anonymously.