An expert said an auto switch turned the suspect's semi-automatic weapon into a deadly machine gun that allowed him to fire 30 rounds, killing Officer Bill Jeffrey. 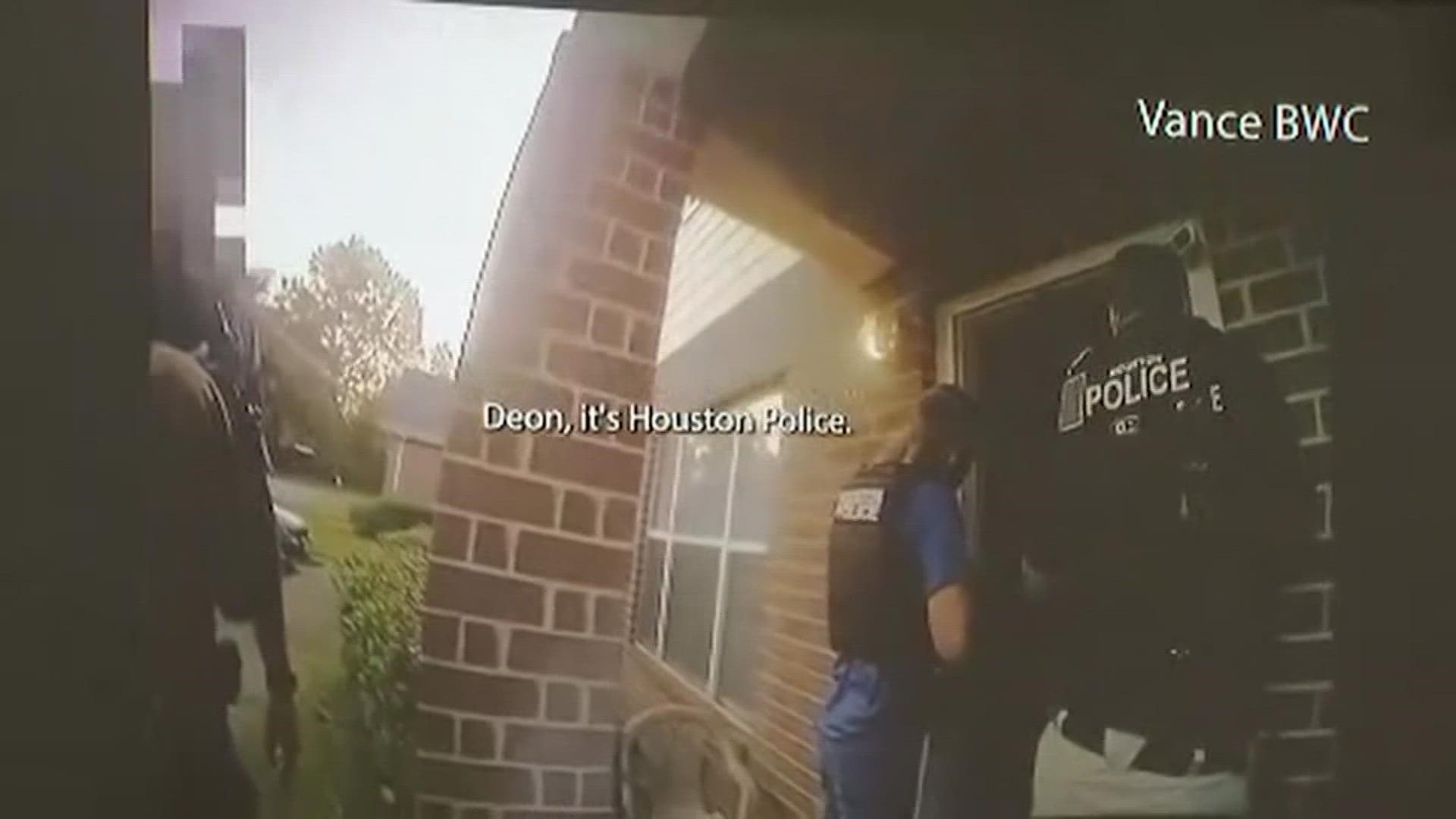 HOUSTON — The Houston Police Department has released bodycam footage of the shootout that left one officer dead and another injured in September.

The footage, which is about 11 minutes long, shows how senior officer William "Bill" Jeffrey and Sgt. Michael Vance were shot while serving an arrest warrant to Deon Ledet.

The video shows Jeffrey and Vance identify themselves as officers multiple times while standing outside Ledet's apartment in northeast Houston. His girlfriend answered the door, but Ledet refused to come out.

Within seconds, multiple shots were fired from inside the apartment and Jeffrey and Vance were hit.

Vance's bodycam shows him crawling to escape the gunfire after he was shot. He is still recovering.

Ledet was killed when officers returned fire in a shootout.

Houston Police Chief Troy Finner said the release of the bodycam video is part of his promise to make footage of all officer-involved shootings available to the public. But he also said he was sharing the footage to shed light on a dangerous weapon being used in Houston streets.

The video combines the bodycam footage from the six different officers who were on the scene. Before showing the video to the media, Chief Finner asked everyone to pay particular attention to the "rapid gunfire."

Fred Milanowski, the special agent in charge of Houston's ATF division, said Ledet was using a gun with an auto switch. That means he can use his semi-automatic weapon like a mini machine gun.

An auto switch, according to Milanowski, allowed Ledet to shoot a 30-round magazine in 2.6 seconds.

"There is absolutely no reason or no room for a suspect or suspects to be armed like this," Finner said. "This is what we're up against and we need to do something about it."

The auto switch devices allow for shooting 30 round magazine in 2.6 seconds.

They are illegal. It turns handgun into a machine gun.

Milanowski said the auto switches, small devices you attach to the back of a gun, are illegal and are a prolonged danger to the Houston community which is becoming ground zero for these types of devices.

"ATF has had seven investigations in Houston arresting people, all of them selling auto switches. We seized about 104 of these auto switches and seized 11 guns that had auto switches already attached to them," Milanowski said.

Harris County Sheriff Ed Gonzalez spoke at the Tuesday news conference, saying these types of guns in the wrong hands are already dangerous. HCSO has seen its fair share of crimes involving guns with the switches.

Sheriff Gonzalez said back in March, Harris County Sheriff deputies seized a gun with a switch after stopping a vehicle for reckless driving. The driver was a convicted felon, Gonzalez said.

"This is scary and dangerous stuff and these are showing up in the hands of very bad people so we need to continue to take a strong stand, whatever it takes, to protect our law enforcement officers and our community and we will do just that."

The Attorney General's Office said an auto switch is a machine gun under federal law and a person can be federally prosecuted for knowingly possessing an auto switch. If convicted, a person could face up to 10 years in prison.

If you have any information about these auto switches here in the city of Houston, all the ATF at 888-ATF-TIPS.