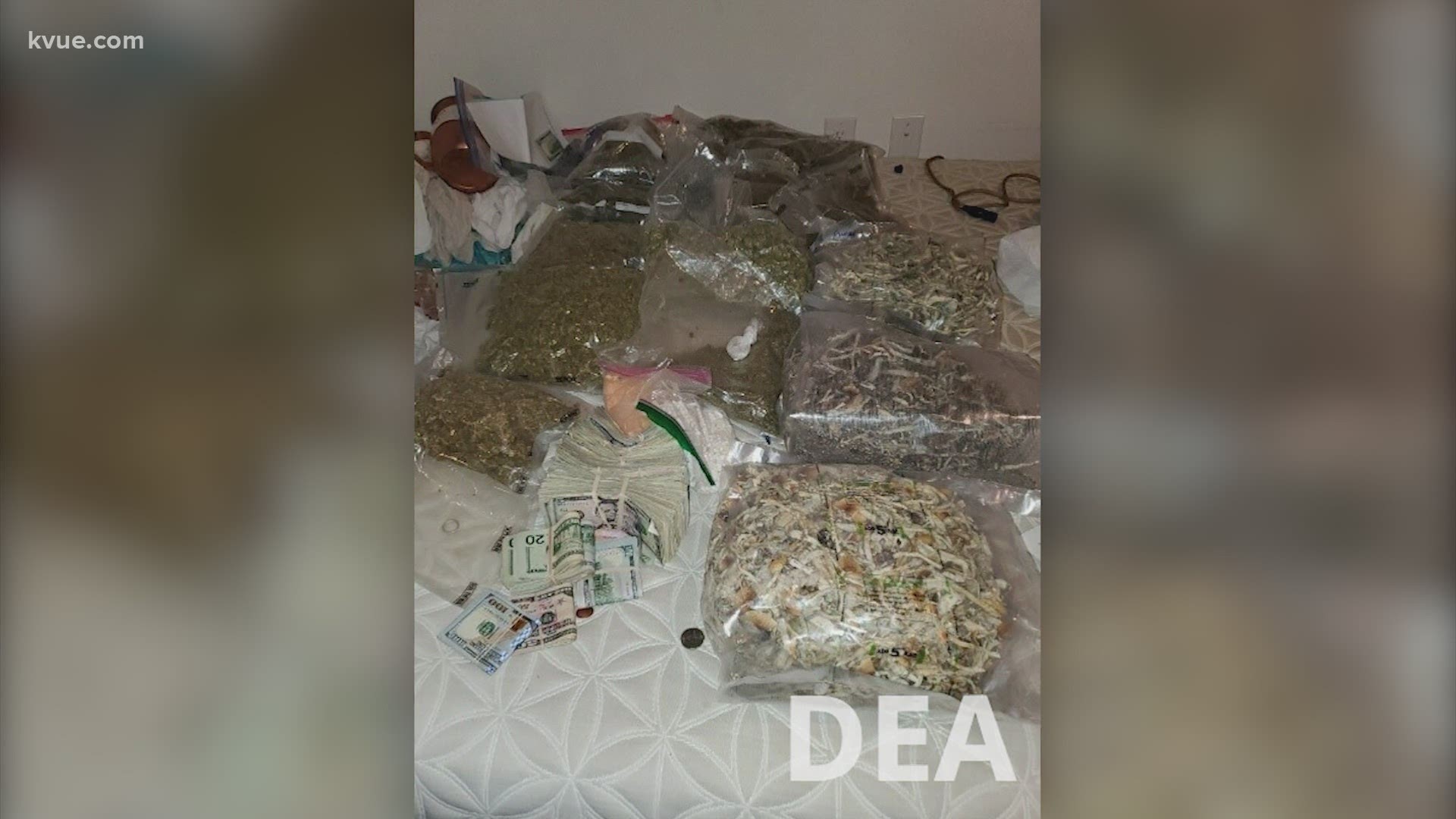 AUSTIN, Texas — An investigation that started in 2019 has resulted in the arrest of 13 people, including former and current University of Texas at Austin students, linked to a massive drug trafficking operation that was largely happening in West Campus.

The announcement was made at a Dec. 4 press conference with the U.S. Attorney Gregg Sofer, a DEA special agent, the IRS and Austin-area law enforcement. At the start of the press briefing, Sofer reached to grab a bag from a table in front of the podium, and sent a message.

"This and a number of the other items that are on this table are poison," Sofer said. "Worse yet, many of the pills before you are camouflaged as legitimate and regulated prescription medication, when unsuspecting college kids and other drug users put these pills in their mouth, they are playing Russian roulette. They are gambling that the drug dealers did not place lethal doses of drugs like methamphetamine or fentanyl in these pills. Tragically, many times their gamble goes horribly wrong and they overdose and sometimes die. If they do survive, they risk becoming addicted to these highly toxic and life-destroying drugs."

Thousands of doses of the counterfeit pills were being distributed in and around the West Campus area, law enforcement said. That increase corresponded with an increase in overdose reports.

Two people involved in the operation overdosed themselves and died during the course of the investigation. Officials said they could not clarify if they were students or affiliated with the university in any other way.

The individuals were arrested for allegedly selling and distributing drugs including LSD, psilocybin, fentanyl and methamphetamine pills to fellow UT students and others in Austin and in San Antonio.

PHOTOS: Inside the drug operation that resulted in arrests of current, former UT students

1 / 6
DEA
Counterfeit pills of all kinds were distributed in and around West Campus.

All arrested are charged with conspiracy to distribute a controlled substance. Some of the individuals are also charged with money laundering. They face 10 years to life in prison.

"We saw mathematics majors, chemistry majors, a psychology major business majors, and they decided to turn their talents into this illicit operation," said Steve Whipple, the special agent in charge at the DEA.

Sofer identified the leader of the operation as 23-year-old Varun Prasad.

Authorities said the arrests are the "culmination of 'Operation Spyder Web.'" The investigation started in 2019 when law enforcement noticed a "disturbing" increase in the distribution in the Austin area of counterfeit controlled substances, specifically, LSD, Adderall, Xanax, oxycodone and other drugs. The counterfeit Adderall contained meth and the counterfeit Xanax and oxycodone contained fentanyl and other dangerous opioids. It's believed that the overall sales of the drugs sold by the operation is more than $1 million.

The 23-year-old leader of the operation was allegedly laundering his drug proceeds with the assistance of a local real estate investor, 68-year-old Benny Daneshjou.

"The laundered funds were used to purchase real estate, which in turn was used by the drug trafficking organization for safe houses, stash houses, grow operations and a hallucinogenic mushroom grow operation that spanned three different states," Sofer said.

When search warrants were issued Dec. 3, law enforcement said they discovered drugs, more than $100,000 in cash, firearms and ballistic vests.

In addition to Prasad and Daneshjou, the arrested include:

A UT-San Antonio lecturer who was arrested in 2019 was related to the operation, the law enforcement officials said. In that case, KENS previously reported that Rose Rodriguez-Rabin was allegedly linked to a "clandestine pill manufacturing operation" that she and an accomplice used to manufacture counterfeit Adderall pills made with methamphetamine.

A spokesperson for UT released the following statement Friday afternoon:

"The university is grateful for the actions of law enforcement to ensure our students can safely pursue their educational career on campus and in the off-campus areas where many live.

The Office of the Dean of Students follows up in matters like this that involve current students. UT has recently dedicated new resources to combat substance abuse through SHIFT, an effort to change the culture of substance use from one of misuse to one of well-being. We remind parents and students with concerns about any member of the university community to reach out to the university through the Behavior Concerns and COVID-19 Advice Line, http://safety.utexas.edu/bccal or 512-232-5050, so we can connect people with the appropriate resources."

The spokesperson said of the 13 names listed, six names correspond to those of former students and one (Nikit Shingari) to a current student.

'Christmas star': Jupiter and Saturn align to create the visible bright light in our sky for first time in almost 800 years