Attorneys dispute police account, say woman was shot from outside her home

They said police lied about black tar heroin being sold at the southeast Houston home.

HOUSTON — Attorneys representing the family of the woman killed in January's botched drug raid in southeast Houston are claiming a private investigation found Rhogena Nicholas was shot from outside of her home.

This contradicts what police said happened that day.

The attorneys filed a petition with probate court requesting depositions from officers to address these findings. They said in addition to their private investigator showing Nicholas was shot from outside of her home on Harding Street, they also showed where several other rounds were fired into the home as well.

Attorneys said black tar heroin was never sold there -- something they said police lied about. They also said 30 minutes after the shootout supposedly ended in the home, a neighbor took cellphone video where two gunshots were fired inside of the home.

"Somebody took a gun at some point, likely long after Dennis Tuttle was dead -- at least based on physical evidence -- and went to a wall and fired two shots into a wall," attorney Mike Doyle said. "That's also been documented by physical chemical tests."

The private investigator also contends that at least one bullet was fired into a wall. KHOU 11 News asked if the officers who were shot during the raid may have been wounded by each other.

That's something the attorneys are still looking into, but said they have limited information from the investigation by police.

"We will get to the truth, and while we welcome any information about the incident that unfolded on Harding Street, we caution everyone to wait for all the evidence to be brought forth before making a decision about what happened that day and who is responsible," Ogg's statement said.

Nicholas, 58, and her husband Dennis Tuttle were shot and killed during the no-knock raid on Jan. 28. Five officers were injured in the raid.

The autopsy report shows Nicholas suffered five "gunshot wounds to the torso and right lower extremity." The report said she had no drugs in her system.

Her death has been ruled a homicide. 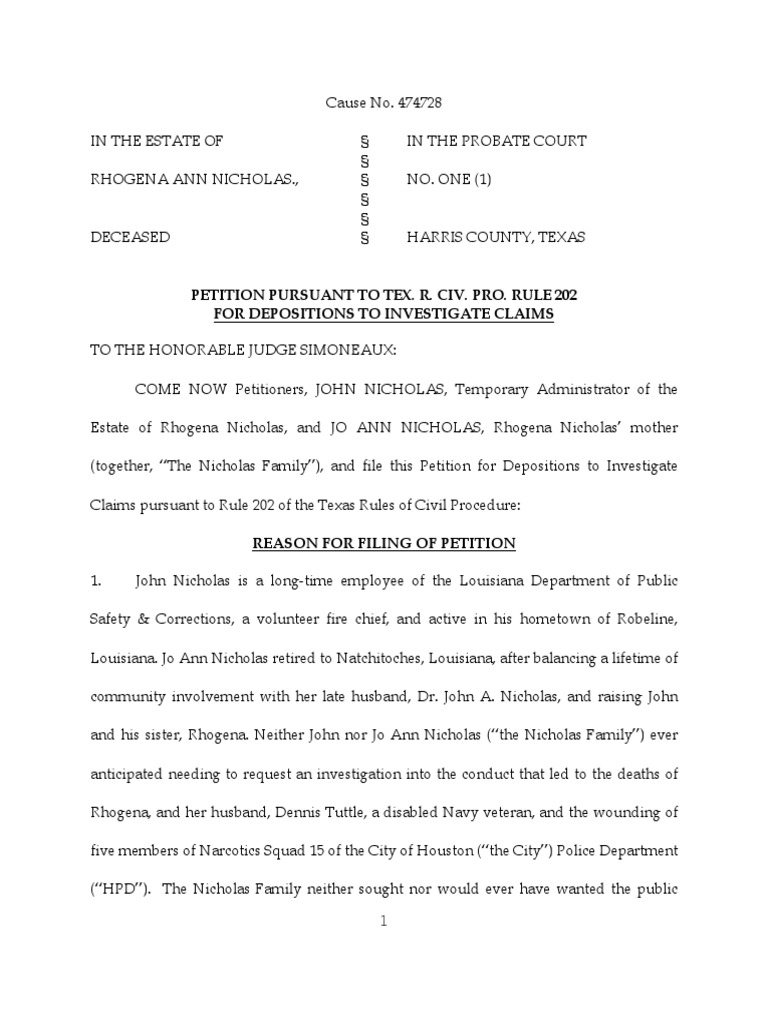 Attorneys dispute police account of botched drug raid | Dna Profiling | Forensic Science
474728 §RHOGENA ANN NICHOLAS., § NO. ONE (1) § §DECEASED § HARRIS COUNTY, TEXAS FOR DEPOSITIONS TO INVESTIGATE CLAIMS (together, "The Nicholas Family"), and file this Petition for Depositions to Investigate Safety & Corrections, a volunteer fire chief, and active in his hometown of Robeline, community involvement with her late husband, Dr. John A.

Read the family's petition in its entirety here.