The small school district with just about 1,000 students wasn't his first choice, but Josh Rush says it was probably his best. 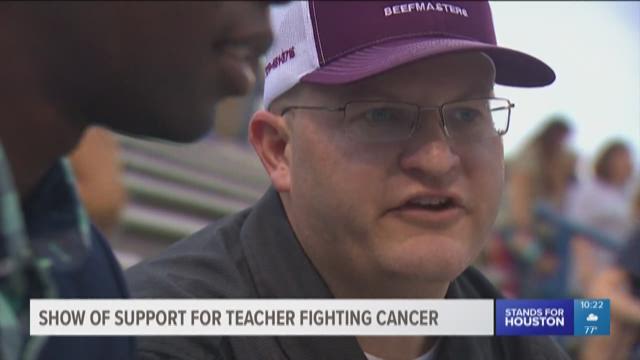 SWEENY, Texas — In one of their biggest games of the year, Sweeny High School is rallying behind a teacher recently diagnosed with cancer.

Josh Rush has made it his mission to be there to support the same school that’s offered him a whole new perspective to the life-altering condition.

This year, excitement once again returned to the field and Rush was prepared.

It was purely by chance that Rush found his way to Sweeny after Hurricane Harvey, so to hear him talk about getting bragging rights makes you question where this school spirit comes from.

The small school district with just about 1,000 students wasn’t his first choice, but Rush says it was probably his best.

“I probably don’t know 90 percent of the people here, but I’ll go grocery shopping and people will say, hey Mr. Rush we’re praying for you. God put these people in my life and it’s been an amazing walk here,” Rush said.

In August, Rush was diagnosed with testicular cancer and began chemo therapy to clear the cancer cells.

Doctors advised him not to return to the classroom, but Rush said that just wasn’t possible.

“I was never a person to give up. You hired me to do something. I’m going to do it,” Rush said.

They reached a compromise where Rush would work half a day, leaving only to continue cancer treatment at MD Anderson Cancer Center. The chemo, he could manage, but the traveling back and forth proved to be far more costly than he imagined.

Principal Will Mader of Sweeny High School offered his help in the form of a wager.

If the students raised $2,500 for Rush, in return Mader would have his head shaved.

“I said that’s amazing, cause I’ve never accepted a donation in my life,” Rush said.

At last count, approximately $5,000 was raised for the man who at one point couldn’t point to Sweeny on a map. Friday night, under these lights, there’s nowhere else he’d rather be.