Tickets issued to drivers passing too close to cyclists can cost up to $500. 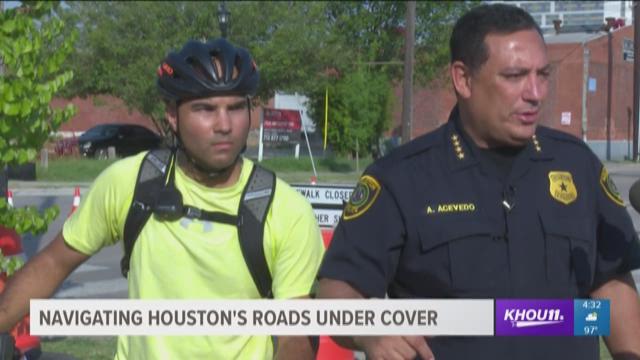 HOUSTON - Houston Police want the public to know the department is enforcing the Safe Passing ordinance. Drivers need to stay 3 feet away when passing cyclists and six feet away if in a commercial vehicle.

HPD has a special tool, a radar unit on a bike that helps them measure a driver's speed and proximity to the bike.

Officers ride around on the undercover bike in high traffic bicycle corridors. They demonstrated how dangerously close drivers are coming to cyclists. One pass during their demonstration came as close as 12 inches away from Officer Berry.

"That was scary, that close of a pass," said Berry. "We have it staged and I know it's coming but it still raises the hair on the back of my neck."

In the real world, cyclists face faster drivers and the element of surprise. Cyclists say it's hard to grasp what the dangers are unless you see it or experience it yourself.

"We move fast in Houston," said Jessica Wiggins, with Bike Houston. "And when you're on a bike and someone goes by at 45 miles per hour you really feel that. That can shake you and your bike. It's one of the scariest things to experience on a bike."

Officers say drivers and cyclists need to share the road, but owe each other common sense and courtesy to keep everyone safe.