Emotional Neil Bush on his mother's life and legacy

Bush said he's been re-reading his mom's memoir and has new appreciation for the memories she shared. "And to read the story of their amazing life together has been a remarkable blessing to me personally as their son." 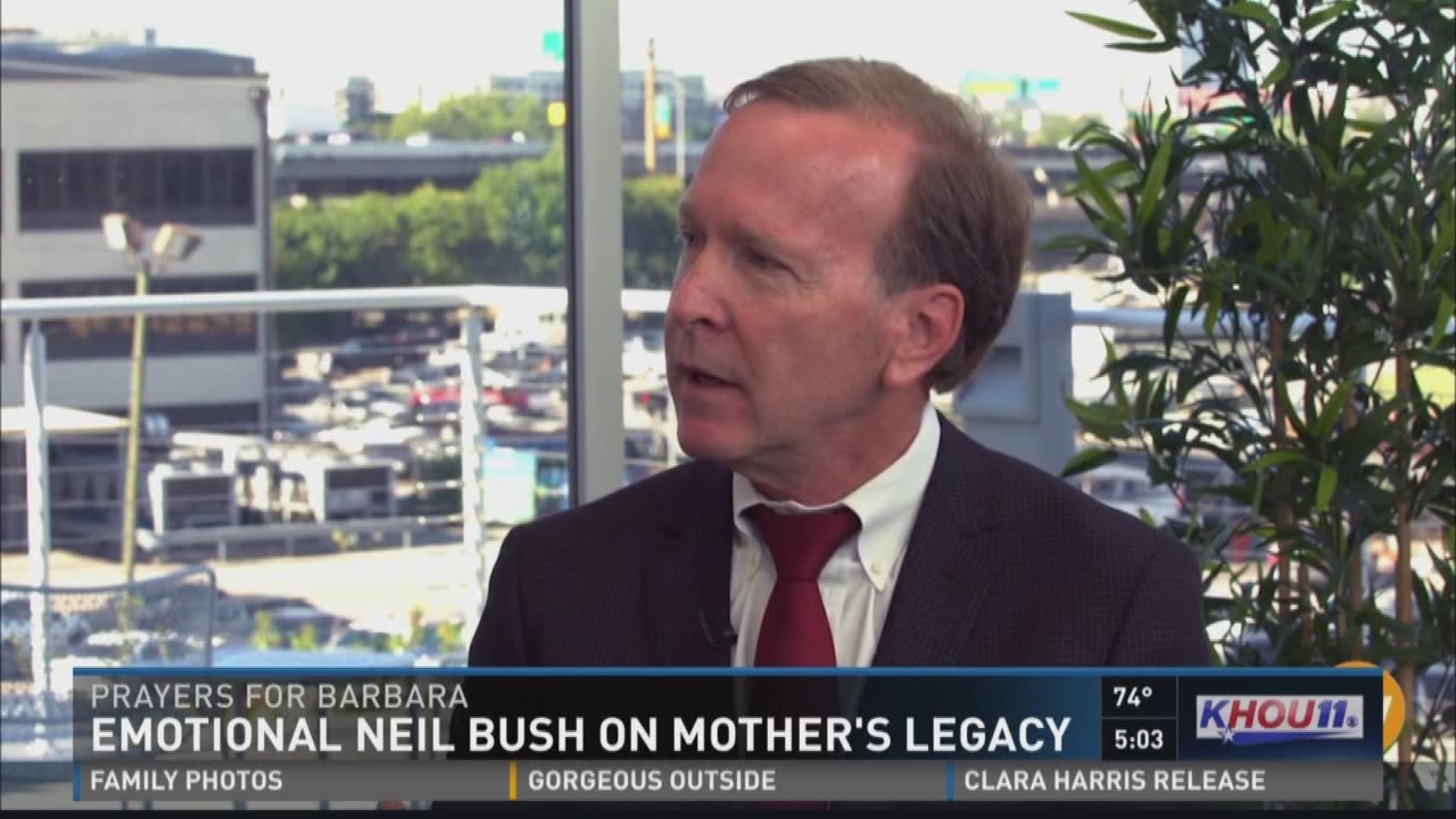 HOUSTON — An emotional Neil Bush reflected on his mother’s life and legacy Monday in an interview with Great Day Houston host Deborah Duncan.

The family spokesman released a statement Tuesday on First Lady Barbara Bush, who died Tuesday evening at the age of 92.

In true Barbara Bush fashion, when she learned about the press release, Neil said, she began answering phone calls from worried friends to reassure them.

He said his mother was able to enjoy one of her favorite past times: reading.

“As my mom has become more and more frail – she’s not able to walk anymore and take her dogs out and that kind of thing – we have quality time and we’re sharing this quality time with other family members and friends that come by to read,” Bush said.

Books have always been like members of the family for the Bushes.

“When I was a kid, she would read to me and my siblings,” Bush said. “I’ve had the privilege – probably the last four or five years, ever since dad has been going in and out of the hospital – of reading to them.”

Bush said he’d been re-reading his mom’s memoir to her and has new appreciation for the memories she shared.

“And to read the story of their amazing life together has been a remarkable blessing to me personally as their son,” Bush said, choking back tears. “And a reminder of just what a fabulous woman she is and what a great life they’ve lived and what a great life we’ve experienced and how much they’ve done for so many others, including her favorite topic, which is literacy."

George and Barbara Bush: A love story for the ages

It was Neil’s own struggles with reading in elementary school that would mold his mother’s lifelong mission. It started when she attended reading day at her son’s school.

“So there’s a reading circle and all the kids have a book and they’re passing the book kid to kid and they passed it to me and I couldn’t read,” he said.

His mother was shocked and determined to bring his reading level up to par with his classmates. While friends were playing ball outside on Saturdays, Neil was inside attending various programs to help him learn to manage his dyslexia.

Through his struggle, Barbara Bush learned illiteracy was a well-kept secret in schools and the alarming statistics left her determined to make a change.

She started the Barbara Bush Literacy Foundation "to improve the quality of life for Houstonians of all ages through the power of literacy."

Neil shares his mother’s passion for literacy and will carry on her legacy with the foundation.

He’s proud that his children have also embraced the idea of giving back to their communities. His son Pierce is head of Big Brothers and Sisters in Houston and daughter Lauren runs an organization called Feed.

“I believe America is going to be better off if every family establishes a culture of service to others,” Bush said. “You’ve got to think of something better than yourself and your daily life and do something good for others every day.”

The Barbara Bush Literacy Foundation will hold its 24th annual Celebration of Reading on Thursday, April 19, at the Hobby Center.