A Christmas tradition dating back to 1968 is coming back to live in Shepherd Park Plaza. 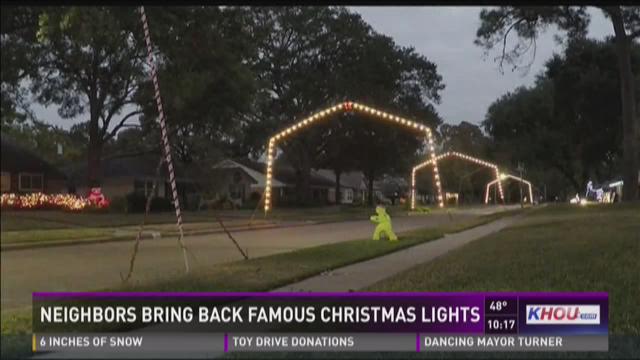 HOUSTON -- A Christmas tradition dating back to 1968 is coming back to live in Shepherd Park Plaza.

On the corner lot, in the neighborhood she never wanted to live in, Sarrah Moseley decorates her home inside and out.

“We just weren’t fortunate enough to have any,” Moseley said. “When we first started looking, I said, 'Well, I’ll live anywhere in the City of Houston, but I won’t live in Shepherd Park Plaza.' He (her husband) said, 'Why?' I said, 'Because those people decorate way too much for me.'”

An energy crisis in the 1980s, vandalism in the 1990s and an aging group of homeowners dimmed the neighborhood.

“It was sad at first, because back in the '60s the whole neighborhood was decorated,” Moseley said. "There wasn’t a house not decorated. You could get drunk just looking at all the lights.”

“We did to do it so it was kind of a last-minute thing the first year,” Warren said.

Another builder joined his ranks, and one by one, the neighborhood slowly came back to life.

“To be outside working in your yard, and people come by to thank you and say how beautiful it is, you can’t replace that,” Pate said.

Best overall, most religious and top cul-de-sac are individual awards. However, that’s not what motivates Moseley.

“I have a lot of nieces and nephews, and just having them come over and enjoy it, they come over just to walk around the block and see all the lots,” Moseley said.

One bulb is just one bulb. It takes a string and entire neighborhood to rekindle tradition.

Now through Christmas Eve, you can join hundreds of others driving, strolling and taking a hay ride through Shepherd Park Plaza.