'Combined Arms' aids vets on their next mission

HOUSTON- A new organization, Combined Arms, pairs veterans to various services in an effort to make the transition from military to civilian life easier 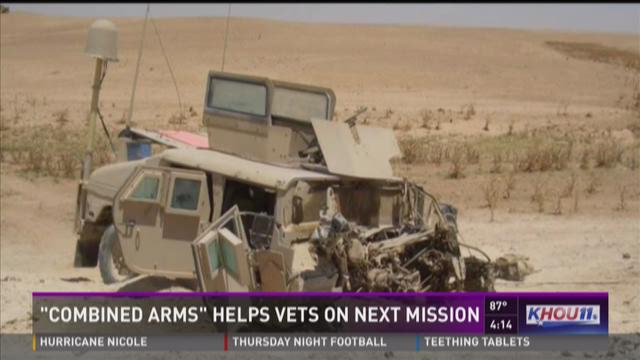 HOUSTON- A new organization, Combined Arms, pairs veterans to various services in an effort to make the transition from military to civilian life easier

“My official Purple Heart happened in 2007 on June 22 where my Humvee ran over a landmine,” said Marine Sgt. Bryan Escobedo. “Everyone got injured.”

He battled from brain injuries and more, but there was still another fight ahead for the combat engineer.

The 31-year-old veteran has adopted the marine motto, “adapt and overcome” by working at the Combined Arms project.

The organization helps veterans with disability checks, job training, job searches and a range of other services. There are nearly 300,000 veterans in the Houston area.

Much of this is possible thanks to generous volunteers and donors.

“My great Uncle Nick who served in Vietnam,” said James Lopez, a volunteer. “When he came out he had a little bit of a struggles.

“For us it has a personal aspect of giving back to the veterans,” said Lopez.