9-year-old on a mission to help deputies stay cool

The young entrepreneur is trying to raise money to buy police equipment. 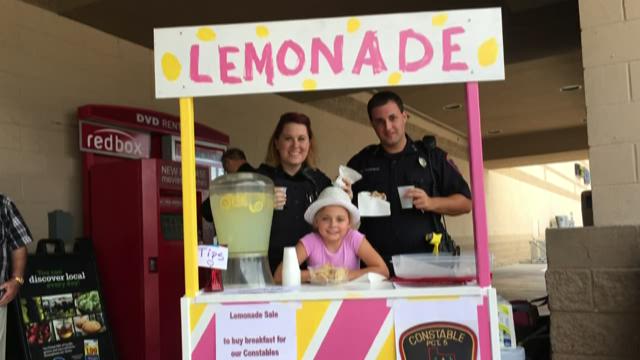 The young entrepreneur is trying to raise money to buy police equipment. Though it is also about showing officers respect.

She also treasures going to Houston National Cemetery every Memorial Day. She plants flags on soldier graves. There are few people she respects more than men and women in uniform.

“They risk their lives for us every day to protect us, and I just want to show them that we’re thankful for that,” Bella said.

“It sort of made me sad and I realized that people don’t really appreciate constables that much, not many people do,” she said.

The next week, Bella and her father built a lemonade stand. In two days, they raised $600.

Bella planned to buy breakfast for Precinct 5 deputies because they patrol near her home and always wave, she said. However, Chick-fil-A refused to sell her food. Its manager insisted she accept it as a donation.

So Bella sent the deputies pizza deliveries, cookies and other goodies. She even tried giving deputies cash, which they could not accept.

“We just wanted to be nice the constables, because not everyone respects them, and we wanted to show them some respect,” Bella said.

Deputies recently showed up at Bella’s birthday party. The delivered balloons, a box full of candy, a $20 gift card and hugs.

By accident, one deputy revealed his department’s real need.

They call it "Cool Cop." It is a black hose that attaches to car vents and funnels cool air under clothes.

“I haven’t been to heaven yet, but it’s close to it,”said Deputy Arland Glover said of the Cool Cop.

Deputy Glover’s wife bought him one. At $65 apiece, Cool Cop is not in the department budget.

That is why Bella planned to buy the devices herself. From noon to 3 p.m. Saturday and Sunday outside the Kroger at Dairy Ashford and Briar Forest Drive, she will operate her lemonade stand to raise the money.

Bella believes officers are well worth it.