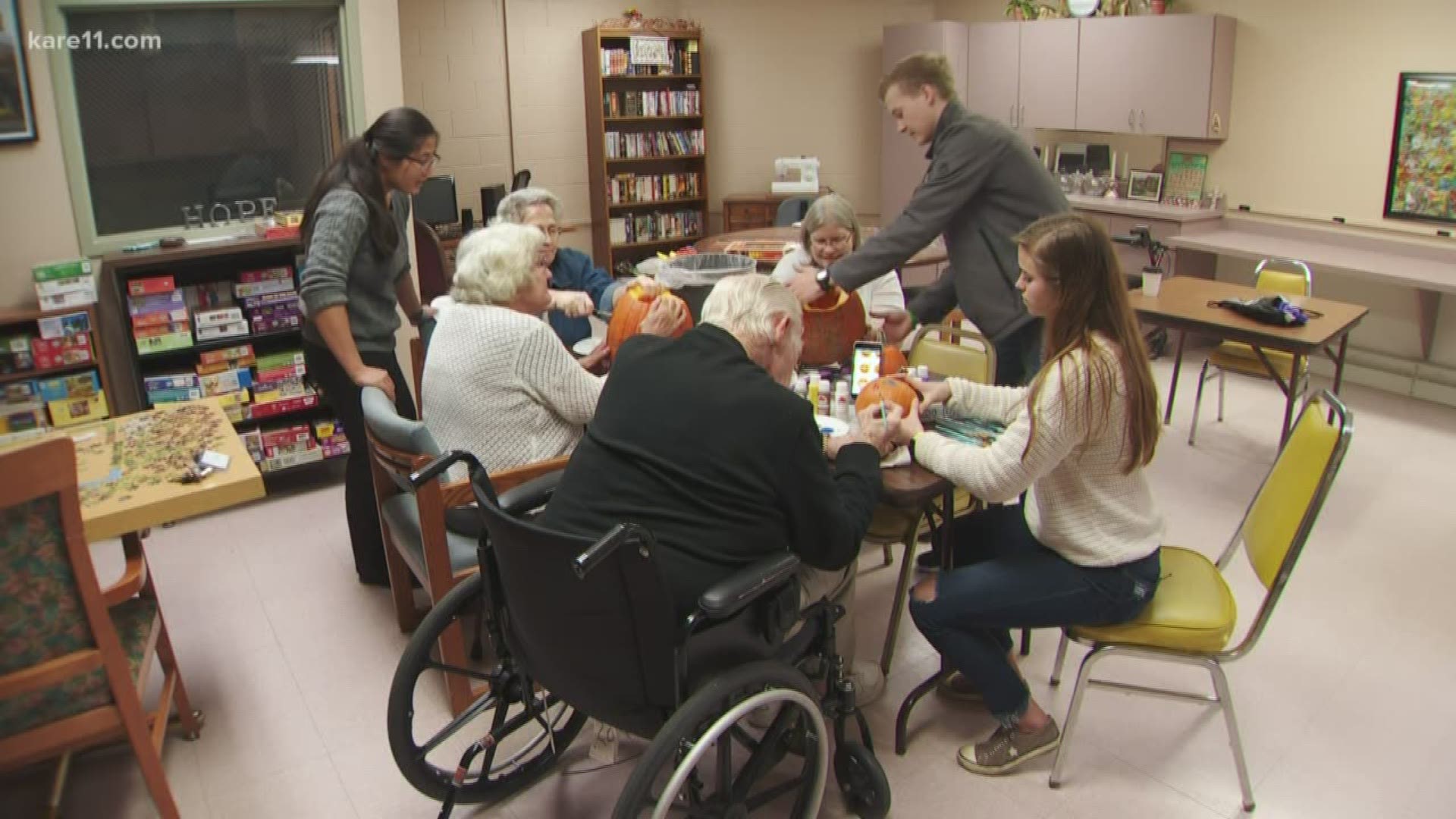 WINONA, Minn. — The Watkins assisted living home has stood for years in contrast to Winona State University. Young and old separated by a few blocks and lots of decades.

Until this fall, when skateboards and backpacks bridged the Geritol gap.

“It was just something very surreal,” Joel Olson, a Winona State freshman, says. “Whenever people ask me, ‘Where are you living off campus?’ and I'm like, ‘In a nursing home,’ and they're like, ‘What?’”

Senior Living at Watkins, as it’s officially known, is not actually a nursing home.  The residence, operated by Winona Health, offers assisted living in modern housing attached to a century-old mansion.

Credit: Chad Nelson (KARE 11)
Senior Living at Watkins, the assisted living home in Winona, Minnesota that is home to both seniors and college students.

Yet, within those walls, old and new, seniors (the white-haired variety) now share space with seniors (the college variety.)

“Welcome in,” invites Hanna Rottier as she opens the door to her room. “This is home,” the nursing student from Stevens Point, Wisconsin, says.

Rottier lives next door to Olson, in a space shared with four other students and 45 senior citizens.

Cheryl Krage is the Winona Health assisted living director who first broached the idea of placing students in eight empty rooms above the common areas of the Watkins mansion.

The first student moved in this fall under a program called "Students in Residence."

Krage saw an opportunity not just for students and seniors to live together, but to share social time and activities.

“I hear residents wondering how the students are doing with their studies. ‘Are you eating enough, are you getting enough fruits and vegetable?’” Krage says.

As the students moved into Watkins at the start of the current school year, Krage encouraged them to share their gifts with their new neighbors.

“It’s a revelation, literally” Thompson said, his bible still open on the table in front of him.  “It’s refreshing, it’s a breath of fresh air.”

A few feet away in the parlor, grad student Laura Jensen hosts one of her weekly crocheting sessions.

“They all mother me, they take care of me,” Jensen says of the women hooking yarn and chatting around her.

“Helps us stay young – ger,” Diane Sheldon says, looking up only briefly from her needlework.

Nancy Neumann sits in the same circle getting pointers from Jensen.  “Even though I was never married, they are like my little grandchildren,” Neumann says.

“This Friday at 1:00 we'll be doing nails,” Rottier says cheerfully.

“I didn’t know exactly how we would interact with one another, but it’s really worked out super-well,” she says.

For ten volunteer hours a month, students get a spacious room in a mansion for $400.

Olson remembers his first visit to Watkins with his parents. For the Winona State freshman from Hastings, the arrangements seemed almost too good to true. “And all you have to do is spend some time with some really nice people?  Of course!” Olson recalls thinking.

All meals are included with the rent. Dining with Watkins’ senior residents is encouraged.

“I'll skateboard in and they'll wave to me out the window – those little things that make it feel like home,” McGaw says.

Five of the Watkins’ students attend Winona State.  The sixth is a student at St. Mary’s University.

Based on the success of the first six students, next year, the assisted living home will welcome ten student residents.

Regardless of age, “It works because I think we are all connected,” Krage says.

A few days before Halloween, seniors and students carved pumpkins together in a Watkins activity room, sharing stories of family and childhood.

It’s exactly as Krage envisioned it.

“Just watching them laugh and have banter back and forth,” she says, “our hope of the program was there would be those connections.

Who says generations have to be miles - or even block 5 blocks - apart?

Not when there’s so much to gain sharing a big roof, and a little bit of each other.

“Honestly, I wouldn't want to be anywhere else,” Rottier says.

Note: click here for more information on the Senior Living at Watkins Students in Residence program.