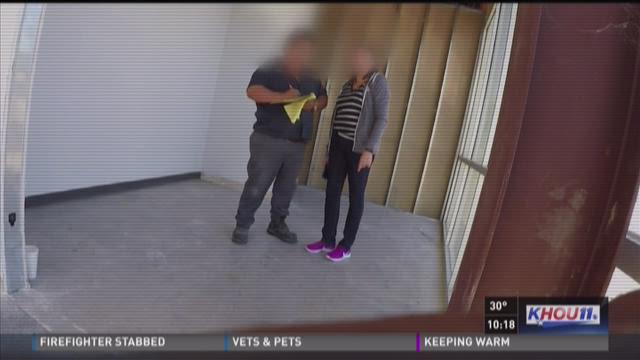 The scene for the sting was a large warehouse on the west side of Houston. The building was nondescript but that's just how the Texas Department of Licensing and Regulation wanted it.

This was the location used when they invited dozens of unlicensed contractors to do electrical and air conditioning work.

The TDLR investigators scoured ads for contractors in Houston newspapers along with Craigslist and Facebook.

"They don't necessarily meet the minimum knowledge requirement to do safe work in your home or your business," said TDLR spokesperson, Susan Stanford.

The idea behind the sting is to cut down on unlicensed Mr. Fix-its around the state.

Texas law requires contractors to be licensed in order to advertise, bid and perform the job. Plus, the license number must be on all advertisements.

KHOU 11 Investigates was invited to the sting and we set up cameras all over the warehouse. For three days, we watched dozens of unlicensed workers take the bait.

On the fourth day, TDLR invited a handful of the contractors back to the warehouse. The repairmen thought they were coming to get a check.

Instead, they were faced with questions and possible fines.

TDLR is trying to shield consumers from inexperienced handymen, sometimes with a criminal record and most likely uninsured.

"Unlicensed people do not necessarily have insurance to cover your home should poor workmanship result in burning down your house," said Stanford.

That was the exact argument that Mario Gomez Jr. used during the TDLR bust.

"I haven't caught anybody's house on fire," he explained after finding out the job was actually a sting operation. "I haven't stole from anybody then guess what? I kinda think that speaks more than a license. It has to say something about integrity don't it?"

Except Gomez has done this once before according to state records. Investigators also discovered that he had someone else's license number printed on the side of his Blue Hawk Electric work truck.

"This isn't about me being deceptive," Gomez told KHOU 11 reporter Tiffany Craig.

"You don't think you're being a little bit deceptive?" asked Craig.

"Well, the thing is, at the end of the day, I'm saving them money and I'm doing them a good job," he said.

The idea of an easy job and fast cash is what lured contractor Lance Mueller. He admits that he knows the law.

"I apologize," Mueller said. "Wow. This is not how you wanna get on TV."

At the end of the sting, TDLR busted 43 people. Investigators hope the fines and public shaming serve as reminders about the value of a license.

Investigators said the fines can reach as high as $5,000 dollars.

If you want to search a contractor by name or license number, click here.