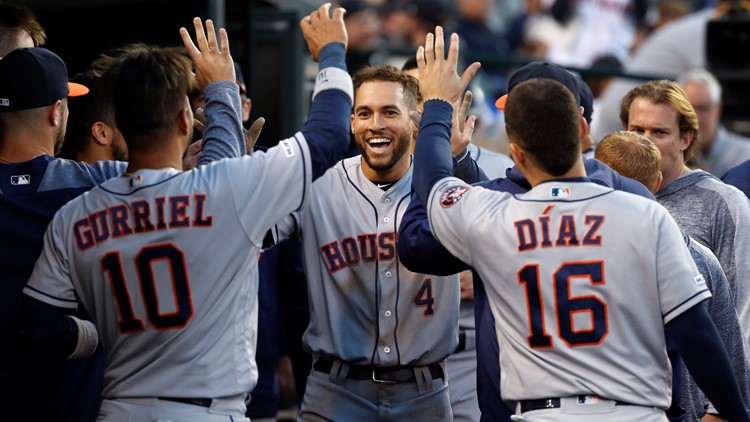 Photo by: AP
Houston Astros' George Springer (4) celebrates his inside-the-park home run during the fifth inning of the team's baseball game against the Detroit Tigers in Detroit, Tuesday, May 14, 2019. (AP Photo/Paul Sancya)

DETROIT (AP) - Carlos Correa started another Houston onslaught with a three-run homer in the first inning, and the Astros routed the Detroit Tigers 11-4 on Tuesday night, extending their winning streak to seven games.

The Astros, who have won 10 of 11, scored in each of the first six innings against a depleted Detroit pitching staff. George Springer hit an inside-the-park homer in the fifth, and Aledmys Diaz went deep in the third for Houston.

Wade Miley (4-2) allowed four runs in six innings for the Astros. Houston led 7-0 after its half of the third.

Ronny Rodriguez homered for Detroit, but the Tigers are up against it this week. Not only are they facing the team with baseball's best record, but they also have a rotation beset by injuries. Tyson Ross and Jordan Zimmermann are on the injured list, and Michael Fulmer and Matt Moore are out for the season.

So Ryan Carpenter (0-2) took the mound for his second start of the season and allowed seven earned runs in four innings. After Correa's homer opened the scoring, Michael Brantley added a two-run single in the second. Diaz's solo shot made it 7-0.

Springer circled the bases in the fifth when his drive to right-center field bounced off the wall and past center fielder JaCoby Jones. It was the first inside-the-park home run of his career, and Houston led 9-2.

The Astros have scored 45 runs in their last four games.

Astros: OF Jake Marisnick got the night off after being hit around the elbow by a pitch Monday night. Manager AJ Hinch said Marisnick would play Wednesday.

Astros: Former Detroit star Justin Verlander (6-1) takes the mound against his former team as the Astros go for a three-game sweep Wednesday night.

Tigers: Detroit did not disclose its Wednesday starter before Tuesday's game. Manager Ron Gardenhire said the team's plan for Wednesday would depend on how Tuesday went.

NCAA to consider allowing athletes to profit from names