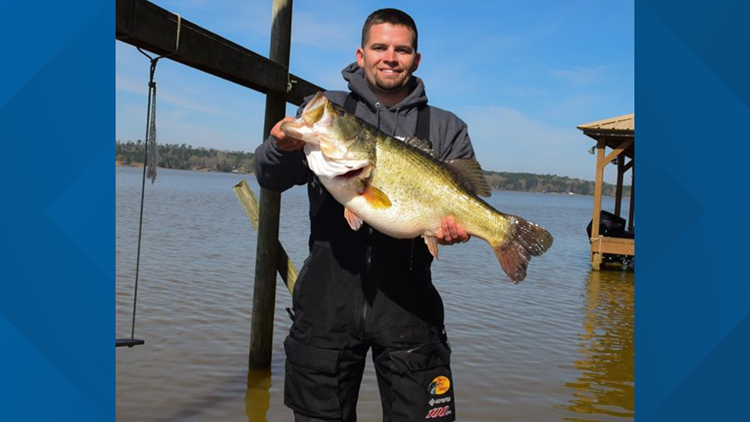 NACOGDOCHES, Texas — A new largemouth bass record is pending at an East Texas lake after a man brought in the second Toyota ShareLunker Legacy Class of 2020.

According to Texas Parks and Wildlife, Joe Castle reeled in a 15.34-pound bass on Saturday at Lake Nacogdoches.

If confirmed, Castle's catch will unseat the current lake record of 14.02 pounds which was set March 19, 1986, by Jimmy Williams.

Every angler who loans a 13 pound or larger Legacy Class bass to the Toyota ShareLunker program during the spawning period Jan. 1 to March 31 will receive a Toyota ShareLunker Catch Kit containing branded merchandise and fishing tackle items, a 13lb+ Legacy decal, VIP access to awards programming at the Toyota Bassmaster Texas Fest, a replica of their fish, and an entry into the year-end ShareLunker Prize Drawing to win a $5,000 shopping spree and an annual fishing license. These anglers will also be entered into the Legacy Class Prize Drawing for a $5,000 shopping spree and an annual fishing license at the end of the spawning period March 31.

Anglers who catch a largemouth bass over 8 pounds or 24 inches can also enter their fish into the program year-round for recognition and prizes and to provide catch and genetic data that helps fisheries biologists better manage lunker bass in Texas lakes. These entries can be submitted on the Toyota ShareLunker app – available for free download from the Apple App Store and Google Play – or on the Toyota ShareLunker website, https://texassharelunker.com/.

The Texas Parks and Wildlife Department’s Toyota ShareLunker Program has been selectively breeding and stocking angler-caught largemouth bass over 13 pounds since 1986 with the goal of increasing the production of trophy-sized fish in Texas reservoirs.