How many dead Americans got paid? And how much is it going to cost us? Will the IRS and the Treasury take active steps to take the money back? 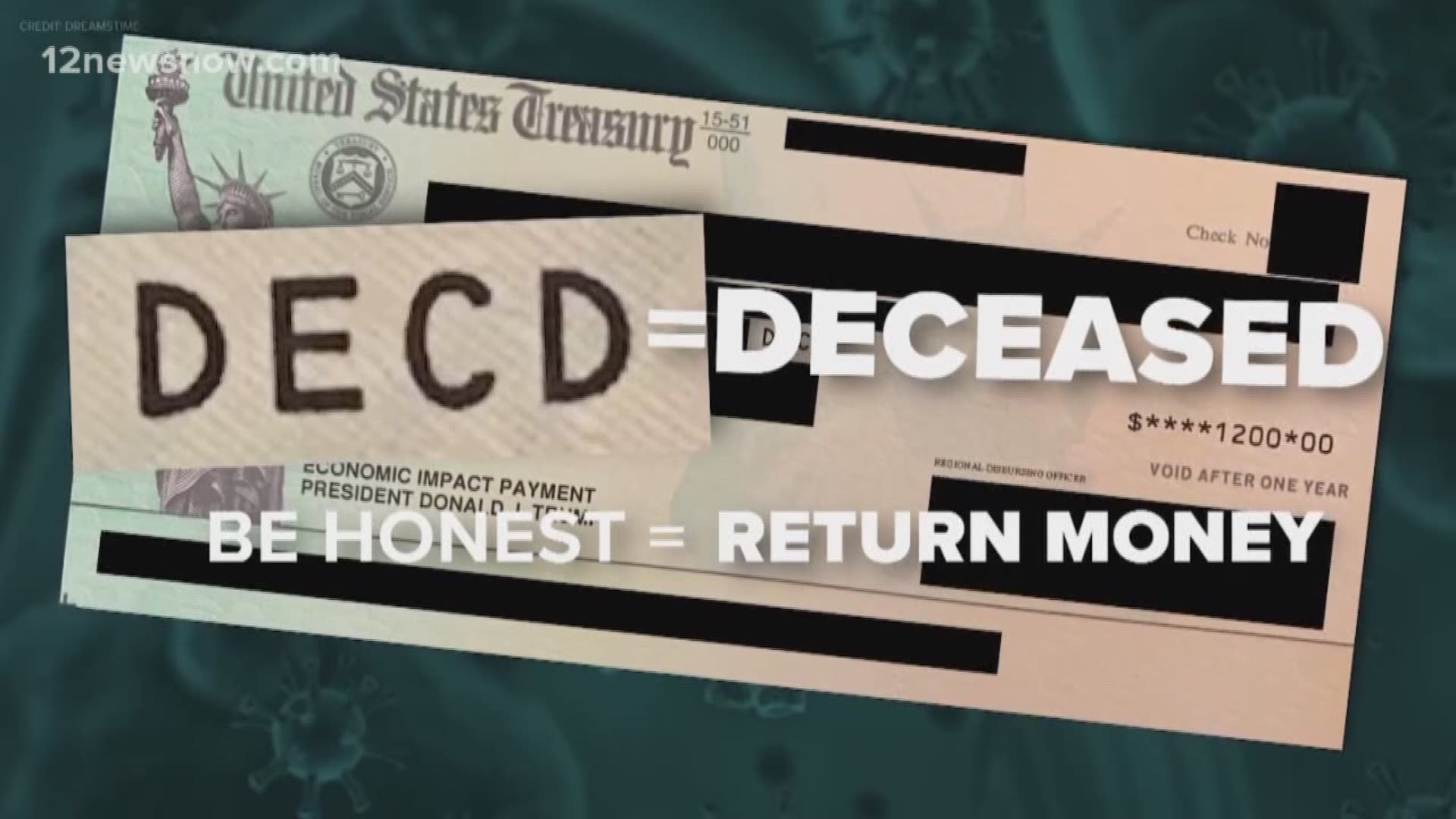 HOUSTON — When you get over the surprise your dead loved one got stimulus money, ignore the fact the IRS appeared to have issued those checks to people they may have known were dead, since the agency coded the checks that way.

RELATED: A Sugar Land woman's mom has been dead nearly two years. So why did she still get a stimulus check?

The checks had DECD on them, a code the IRS uses as an abbreviation for a deceased person, according to the IRS website.

You are now expected to be honest and return what’s not yours.

After issuing an undisclosed number of checks and direct deposits to deceased Americans, IRS put out guidance in May (see answers to question 54) on how to return the money, since people who are no longer with us are not eligible for it.

What happens if you don’t return it? The IRS hasn’t said. How is it possible deceased Americans, who had their checks coded with DECD still received CARES Act checks? The IRS didn’t answer any of our questions, for weeks ignoring KHOU 11’s multiple requests.

“The legislation that was passed has several different provisions that seemed to say if the IRS makes a mistake, that mistake is on the IRS, not on you,” said Adam Michel, who’s looking at the CARES Act language as an economist. He’s a senior policy analyst at the Heritage Foundation, a conservative think tank. “If I had to guess, the IRS won't be coming after people sort of tooth and nail as they would in a lot of other ways. But they may surprise me that guidance could be coming."

How many dead Americans got paid? And how much is it going to cost us? Will the IRS and the Treasury take active steps to take the money back? Once you get over the euphoria of getting the money, here’s why the answers matter, according to Michel.

“Who doesn't want a little additional money in their bank account?” Michel said. “But the federal dollars aren't free. They have to come from somewhere. Means the taxes have to be higher in the future.”

The people who have the authority to demand answers from the IRS and the Treasury are Texans elected to represent the taxpayers in Washington.

In a previously scheduled interview on May 4, Senator John Cornyn, who’s running for re-election this year, told KHOU 11 he hoped Texans returned the money.

“That's not what Congress intended when we appropriate the money, to be sure,” he said.

“That thousand dollars multiplied by however many people received these checks they shouldn't have, means that someone else has to pay higher taxes to make up for that,” Michel said. “You may not see that person has higher taxes, but ultimately that's the problem with large federal bureaucratic programs like this. You see the direct benefit in the form of a check in your bank account, but what you don't see slowly increasing higher taxes in two or three years. And that's ultimately what allows government to grow over decades to the size that it is today.”

For weeks, KHOU 11 tried talking to the state’s other senator, Ted Cruz, and 36 representatives, asking for a Zoom or another form of a recorded interview. No one chose to make time for us, but some sent statements. KHOU 11 is including all the statements it has received. If the reader doesn’t see the name of their elected official, this means we have not received a comment from him or her.

In a text message, a spokesperson for Rep. Kay Granger wrote, “The IRS acted with unprecedented speed in distributing economic impact payments to millions of Americans. By the Treasury’s estimate, over 130 million Americans received payments worth $218 billion in less than 5 weeks, and almost 11 million Texans have received around a collective $20 billion. Given the speed with which our government mobilized to bring much-needed relief directly to the American people, some mistaken payments have unfortunately been a rare byproduct. The IRS has posted a link on its website through which Texans on the receiving end of these mistaken payments can mail their check.”

“This situation is unfortunate because I know many people are in need of this money right now, and it is not their fault that they mistakenly received this payment. It is even more unfortunate for the people who have already spent the money because they have lost their jobs or had their hours cut, but still need to pay their bills and take care of families. It is important for families to visit the IRS website at IRS.gov to determine if and how they should return these payments. If folks have any additional questions, they can call my office at (832) 325-3150,” Congresswoman Sylvia Garcia said in an email. “The need is great in Houston and all across the country, this is why we included a second round of economic impact payments, expanded funding for food assistance programs, and allocated $175 for rent and mortgage assistance in the recently passed HEROES Act. We need to continue doing more to help all the families that are hurting during this pandemic."

In an e-mail April 23, at the time when KHOU 11 first started looking into the issue, Congressman Kevin Brady wrote Congress was, “talking to the Treasury Department about these instances and they are reviewing.”

KHOU 11 asked for further comment, but we haven’t heard back.

“I recommend that those who’ve received an Economic Impact Payment for a deceased loved one to take the money and put it into a savings account until they are advised by the U.S. Treasury Department on what to do with the funds,” said Rep. Babin. “Those who feel strongly that they shouldn’t have this money, and are rightfully worried about the national debt, can always write a check for the amount back to the U.S. Treasury right away.”

Several senators and congressmen from other states sent a letter on May 7 to the Treasury, the IRS and the Social Security Administration asking for accountability, outlining a series of questions related to deceased Americans receiving stimulus money.

On May 28, spokespeople for two representatives told KHOU 11 they have not received answers.

On May 6, one of the lawmakers who signed the letter, Rep. Cheri Bustos (D-IL), reintroduced legislation Stopping Improper Payments to Deceased Individuals Act.

“This bipartisan, bicameral bill would help protect taxpayer dollars by ensuring that federal agencies have access to the most accurate data,” her spokesperson wrote in an emailed statement.

As KHOU 11 previously reported on April 24, the Social Security Administration keeps a file of deaths in the United States, according to an email from a spokesperson.

As of June 2019, the file contained more than 125 million records. Almost 2.9 million are added each year. The Social Security Administration shares the data with several federal agencies, including the IRS. The Death Master File is updated weekly and monthly.

The federal agencies receiving the file can get weekly or monthly electronic updates depending on the schedule they select.