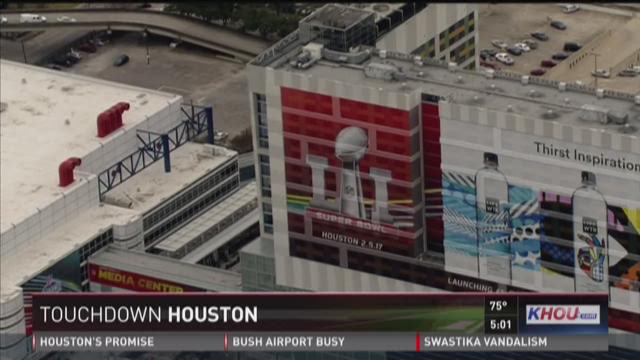 HOUSTON - Most people have heard the phrase “You have to spend money to make money”, and in Houston during Super Bowl week, there’s already plenty of both happening.

On Wednesday, Mayor Sylvester Turner told KHOU 11 just how much he thinks all of the festivities will bring in and how much the Super Bowl will cost the city.

“I do believe that the return for the city will far outweigh the public expenditure and the public amount,” said Mayor Turner Wednesday morning during his weekly press conference.

Turner estimates the Super Bowl and related events will cost the city about $5.5 million, which covers police, fire, and other city workers.

“Part of the agreement we have reached with the Super Bowl Host Committee is for them to pay us that money before the game as they work on the return from the major events trust fund with the state of Texas,” said Turner. “I can say to the people in the city of Houston that we have received that estimated payment.”

Even after all the expenses, Turner expects an extra $350 million will flow into the city in the form of sales and hotel occupancy taxes and business earnings.

On Monday, Price Waterhouse Cooper predicted the event will generate approximately $190 million in direct spending for the Houston region, a 40% increase in direct spending over the last time the city hosted the Big Game in 2004.

Mayor Turner suggests the most important numbers might be the ones that happen after all of these visitors go home.

He says if they have a great experience and talk up Houston to their friends and business associates, there’s no telling how many tourism and convention dollars could be coming our way in the future.

“From those who were here in 2004, they say it is significantly better, said it looks better,” said Turner, who also said he’s getting glowing reviews from people from Minneapolis, which will host the Super Bowl in 2018.

“Very very impressed, just didn’t think that our city could do it any better,” said Turner.