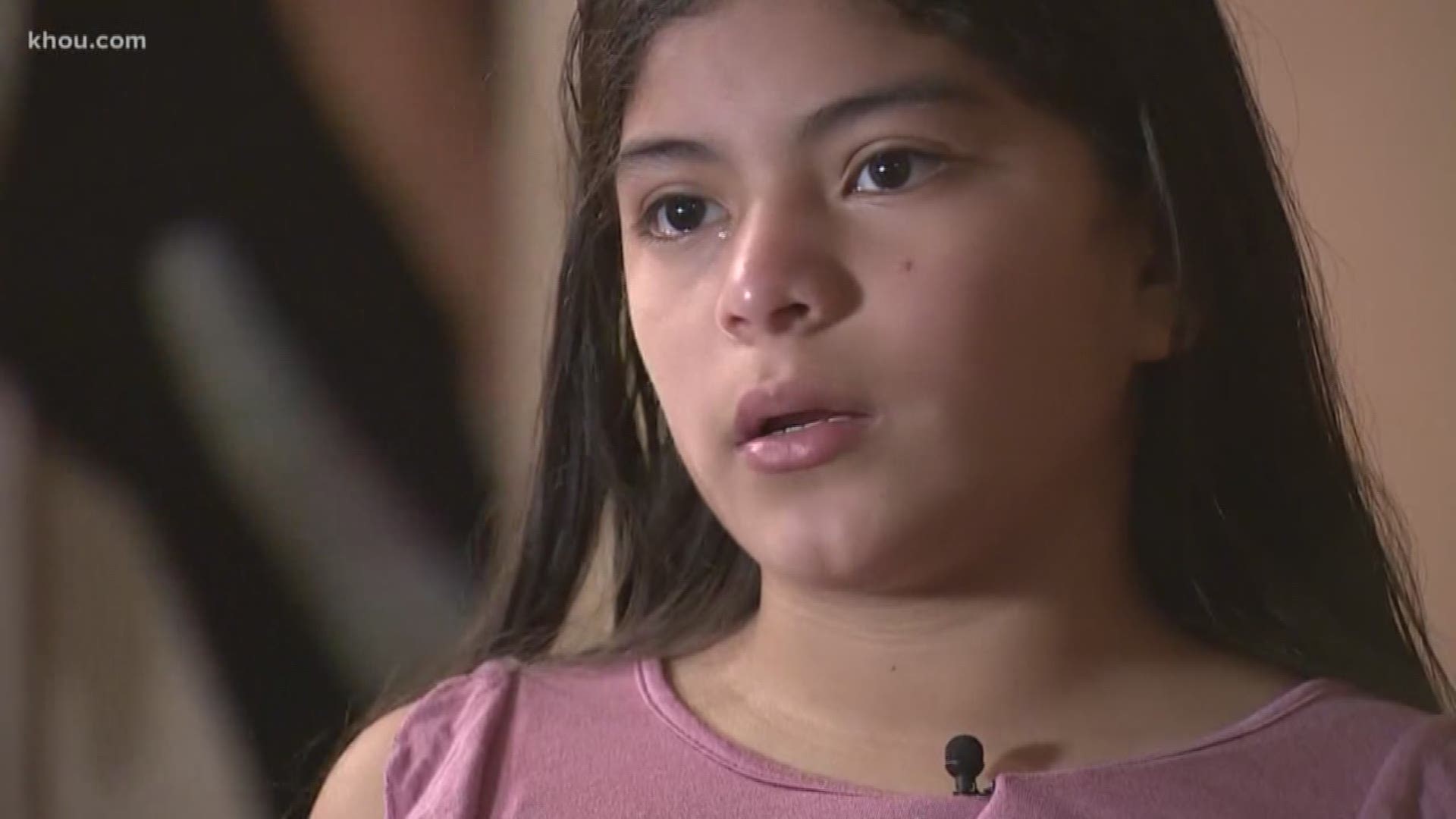 HOUSTON — In 2017, Betzabe Gomez wrote a heartbreaking letter to Santa. She asked him to fix the roof on the family's north Harris County home. All of the rain that fell during Hurricane Harvey was too much for the old roof. Part of it caved in. For months, the only thing that procted the Gomez family from the elements was a blue tarp.

The letter, which was shared on Facebook, went viral, capturing the hearts of people across Houston and Southeast Texas.

I need help in my house because when it's raining, the rain comes in. When I look at it, I am sad. This is why I want help and what if it floods in there. Also, we don't have no concrete under the carpet. Also, when I come next to the wall the thing is, it's a giant hole. Anyway, when I come close to the room and the hole I can feel the rain and when It's raining we have to put a bucket.

P.S. I will leave milk, cookies and carrots and water.

When asked why she chose to write the letter to Santa Claus, she said, “I've always been believing in him. I thought he would help me. I was just trying to explain my hard life that… my dad is sick and how hurricane just had to come and just make a giant hole on the roof. I just want to explain my whole life, that I'm going through.”

WHAT HAPPENED AFTER THE LETTER TO SANTA?

State Representative Armando Walle was on the first to step in and help the family. He reached out to non-profits and community groups and in late 2017, Walle was able to get a more durable lining over the roof and volunteers patched a couple of holes in the family's living room.

By March 2018 the Gomez family was working with Harris County's Community Services Department which uses federal funds to renovate, repair or rebuild homes that qualify for government help.

The Gomez's qualified for a brand new house. The plans for a three-bedroom two-bath house were approved in 2018.

The family thought that was going to be their last Christmas in the dilapidated home. But in 2019, they say, the county stopped returning their calls.

"There’s mold. There’s actually been a mold inspector who said no children should be sleeping within this room. No one should even step past the door," said Betzabe's older brother Angel Gomez as he gave KHOU an updated tour of the damage inside his family's home.

From ceiling problems in the bathroom to exposed plywood to the smell of mold and mildew inside the home, the family's best defense against the growing list of damage is a combination of plastic, cardboard and duct tape.

"It just it gets me real sad," said Betzabe as she held back tears.  You can feel the weight on the 10-year old's shoulders.

"It’s just not what I thought it would be in the last two years. Because I thought, oh! Maybe they’re going to plan a new house. And not many bugs or insects are going to come in. But it’s not. It’s just reality."

The reality is the family says they couldn't get Harris County to return their calls for months. All the Gomez's want is answers. A timeline. A date to look forward to.

"We haven’t been getting too much information about the new house, or anything," said the 5th grade girl.

During multiple conversations with a spokeswoman for Harris County, KHOU learned owed back taxes, paperwork and approval by county commissioners slowed the process.

Meanwhile the Gomez family has been busy tending to father Martin Gomez's depleting health. They're easing him into hospice care. He requires dialysis and he's recovering from a stroke.

"I’m waiting for God to answer and give us a new home," said Betzabe.

This afternoon we helped to answer Betzabe's prayers. Harris County confirmed via email that construction will start within the next 60 days. New construction to ring in the first year of a new decade.

FOR THOSE WHO'VE HELPED OR OFFERED TO HELP:

The Gomez family says thank you! From people who've donated in years past, to the roofers offering to do a permanent fix for free. The family is appreciative. But they're hopeful Harris County will start construction within the next 60 days. So they don't want the hard work and money to be wasted when the home is torn down.

And if you're wondering what happened to the money donated through a GoFundMe page, the money was returned to the donors. The account wasn't set up by the family and the Gomez's didn't know they needed to deposit the money in their bank account within a short period of time.

The good news is that the Gomez family has selected their plans.  We are optimistic that construction could begin within the next 60 days and completed in May, if the Gomez family is able to satisfy a few final steps.

As you know, anybody who decides to build a home must go through a series of steps including qualifying for the loan, or in this case, applying and qualifying for our program. For anyone buying and building a home, the process can take 6 to 12 months.  When the process requires meeting federal guidelines, securing builders, and engineering services through government entities, the hurdles are extremely high and can add significantly to that timeline.

It must be noted that the procurement of architectural and construction services have been affected by demands due to the Hurricane Harvey disaster.  The Gomez home is not part of the Harvey disaster assistance program, but is actually ahead of this process, by being in the regular home repair program.

In the case of the Gomez family, the application to repair their home was received March 26, 2018.  Following a series of inspections it was determined that the Gomez family would be best served by reapplying for a complete new home on that property.

On 10/30/18 the home was converted from a major rehabilitation to total reconstruction.  This required a new process; securing sets of architectural plans; hiring engineering services; soil testing, etc.