A Houston Police Officer was caught on camera dancing with a little girl in a wheelchair at a party over the weekend. He was on duty, but says he just couldn't help himself and had to ask her to dance. 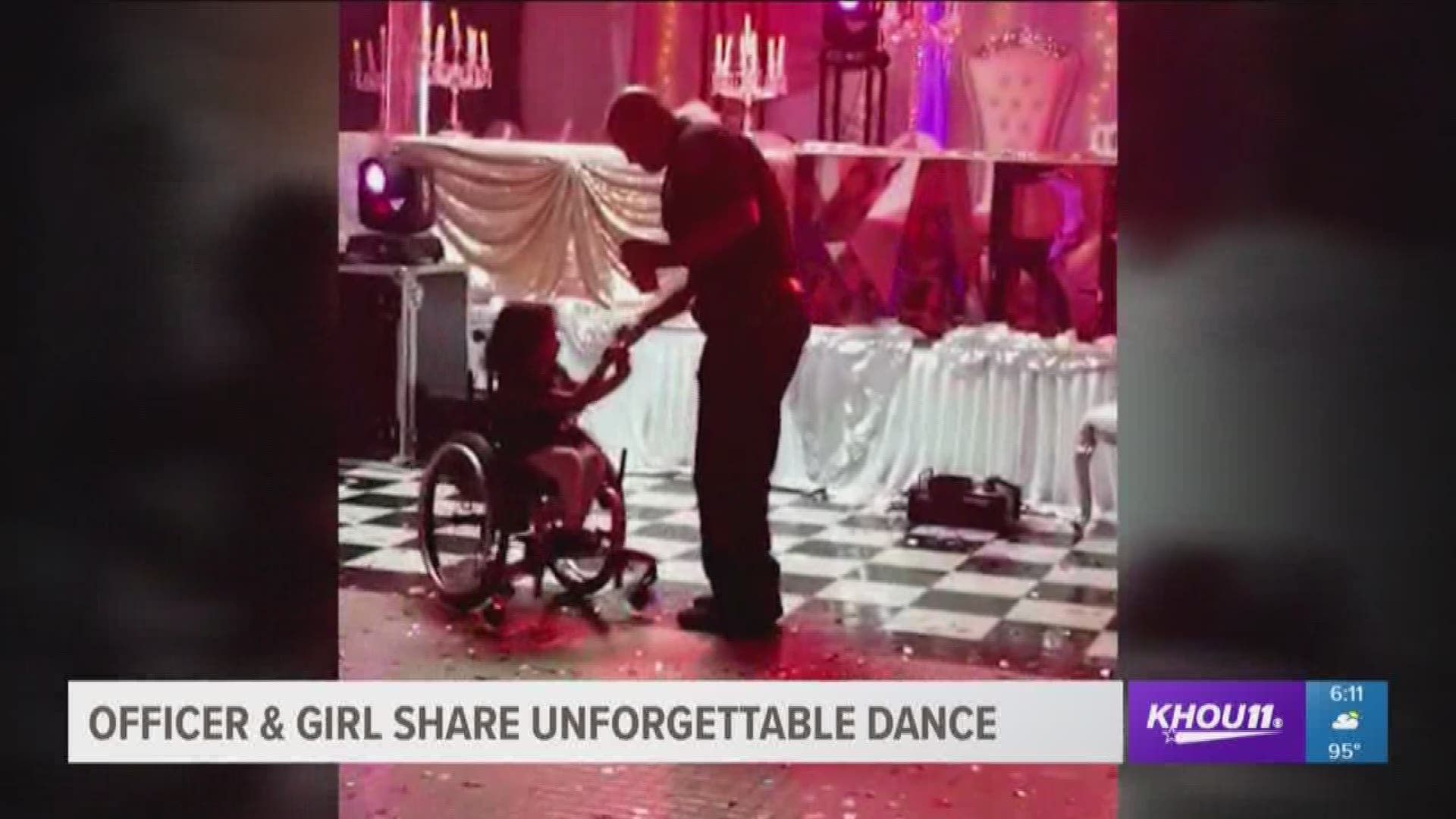 HOUSTON - A Houston Police Officer is in the spotlight – for all the right reasons.

He was caught on camera dancing with a little girl in a wheelchair at a party over the weekend.

He was on duty, but says he just couldn’t help himself and had to ask her to dance.

With her Minnie Mouse shoes and light up wheels, it’s hard not to fall in love with this little lady.

“She was always smiling. She was always waving at me, and I was like 'oh that’s nice,'" Houston Police Officer Sandy Fernandez said.

"He told me I was pretty. I told him he was nice," Five-year-old Saori said in Spanish.

He was working a quinceanera when he saw five year old Saori.

“She was there dancing, her mom was just like spinning her around. I was like 'oh okay, look at that,'" Officer Fernandez said.

Dancing with her mom, dancing by herself, the little ballerina didn’t care as long as she was spinning her wheels.

But then, Prince Charming came along and asked her to dance.

"He told me that he liked my shoes. And I had Minnie Mouse shoes like these on," Saori said

“We were just having fun, so much fun. So much fun together. It was just great," Officer Fernandez said.

Officer Fernandez has a daughter of his own and a sister in a wheelchair. So seeing the little dancing queen out on the floor by herself tugged at his heart.

They danced a couple songs, and he even gave her a flower.

"He told me that he wanted to give me a flower. I pinned it on my dress, right here," Saori said.

Juan Mancha, a DJ, got out his cell phone and captured the two dancing. It's only 13 seconds long, but Mancha says it sends a powerful message.

"I was just so motivated by it, because nowadays everybody just doesn't trust the cops, and I was DJing and I stopped everything I was doing because it grabbed my attention. Looking at him just asking her to dance. She couldn't believe it, her smile, she just kept looking at him and he started dancing with her and I said, 'Oh, I got to get this moment,'" Mancha said.

Officer Fernandez never knew they were being recorded, and he never thought so many would see. But he’s okay with it.

“The public needs to know that we also have hearts. We also have family," Officer Fernandez said.

And for mom, it’s a moment she too will never forget.

"Truthfully it made me happy because he was dancing with her. Despite being in her wheelchair she tries to have fun. And to see him make that gesture to dance with her, it’s truly a beautiful thing," Maria Moreno said.

Officer Fernandez says he hopes to see Saori again, and maybe have some lunch.

But this five year old says she just wants another dance.

KHOU shared the video and It's been viewed more than 300,000 times.