'This ... is what Texas is all about' | In times of need, Texans are helping Texans

From food delivery drives to letting neighbors use their showers, Texans are showing their generosity during a time of crisis. 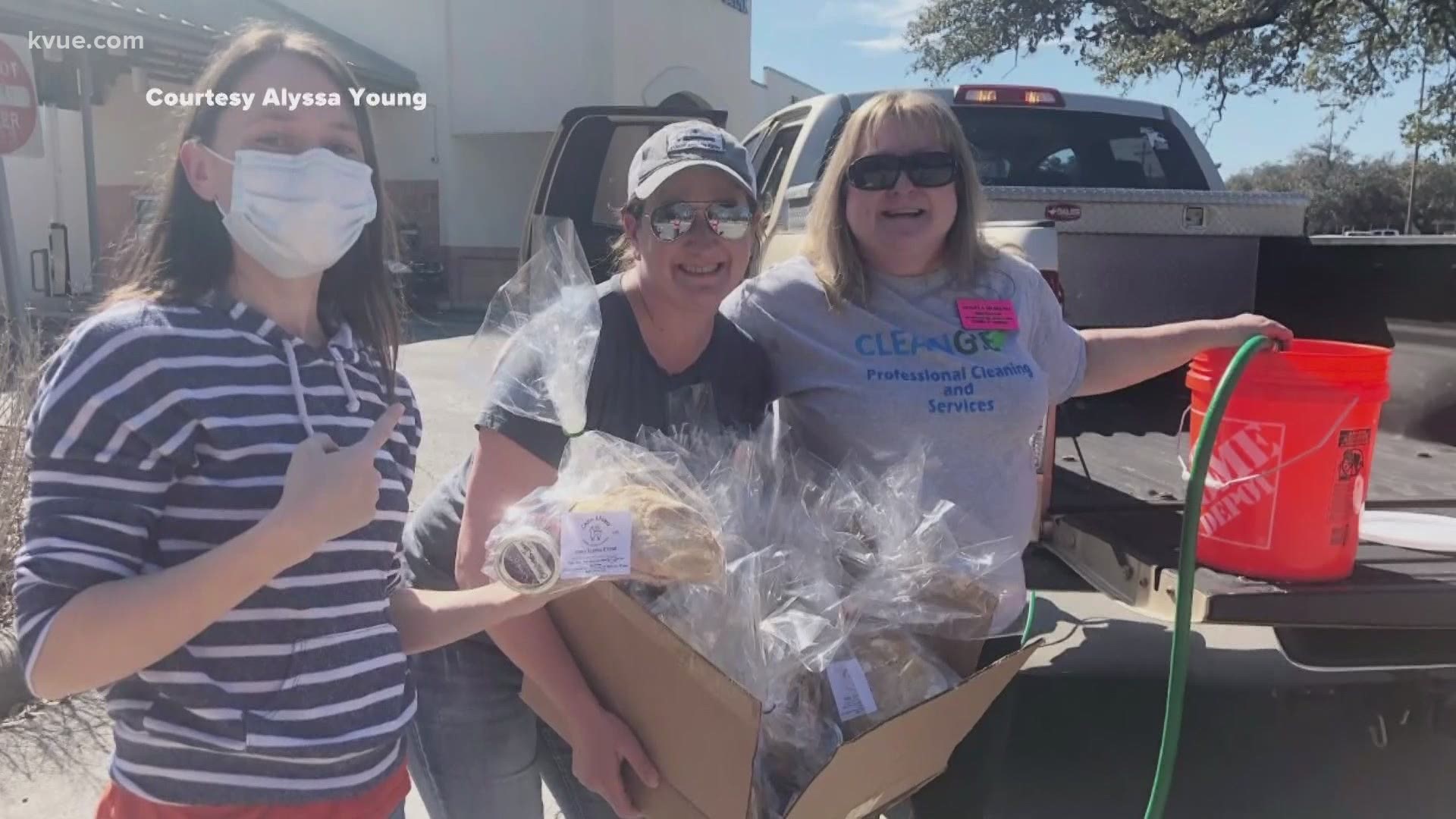 AUSTIN, Texas — For Alyssa Young, doing nothing was not an option.

The owner and sole employee of Austin-based dessert caterer Cake Llama lost power and water after the winter storm smacked Central Texas, but the hardship did not prevent her from organizing a sandwich delivery drive extending all the way to San Antonio.

Young put together kits with baked bread, peanut butter, jam and honey, hoping to reach areas where the storm made roads impassable and knocked out power to grocery stores.

“A lot of small towns are just destroyed right now. It’s bad. One grocery store supporting three or four towns. And without that, there’s just … nothing,” Young said. “We’re delivering to doorsteps, delivering to businesses for pickups, delivering boxes of bread and free sandwich kits to local ships in the area, and just saying, ‘give them out.’”

Young said some police officers have even offered to distribute boxes while on patrol. Volunteer drivers with strong gas mileage or electric vehicles have also aided the delivery efforts.

“Just got to look after each other,” Young said. “At the end of the day, no matter what situation we’re in, we’re all in it together.”

The sandwich drive from Austin to San Antonio represents just one example of “Texans Helping Texans,” which spread quickly as a popular hashtag on Twitter, Facebook and Instagram. Former UT football All-American Michael Huff paid for 1,000 tacos to give out in Austin, Colt McCoy and others worked with a group named “SafeHorns” to serve students on campus, and a Killeen brewery called Iron Gauntlet Brauhaus boiled 600 gallons of water.

If you’re in Austin and need a hot meal and can safely make it to @DonJuanTaco I’ve paid for 1,000 tacos in advance. Let’s feed as many people as we can and only take what you need. 2300 E Cesar Chavez st Austin, TX 78702.

In Leander, Allison and Jacob Massengale noticed that local grocery stores had run frighteningly low on essential products, so they pronounced on Facebook that Nameless Farm would be "OPEN THIS WEEKEND." A steady stream of neighbors, all craving fresh food, stopped by the farm to pick up produce, meat and baked goods, among other items.

The farm also received its own donations from across the country – as far away as Washington state, California and Massachusetts – to help people buy multiple bags of groceries.

“The joy was amazing. It was off the charts,” Allison Massengale said. “I’ve never seen people so thankful for groceries before.”

The Massengales opened not only their farm, but also their home and bathrooms to anyone in need.

“Had neighbors coming over, taking showers in our house,” Jacob Massengale said. “That’s always uncomfortable! ‘Can I come shower at your house?’ Yes, you can!”

Alyssa Young, the Cake Llama owner, still does not have water herself and said that getting a plumber to fix her family’s pipes “is kind of worse than the cable guy at this point.” On a Sunday morning delivery run, she sent KVUE a photograph of people giving away free water from a fire hydrant.

List of Central Texas school delays, cancellations due to weather

List: Where to get drinking water if you have no water to boil