AUSTIN, Texas --  In groups, at food parks or by themselves --- food trucks are everywhere in Austin. 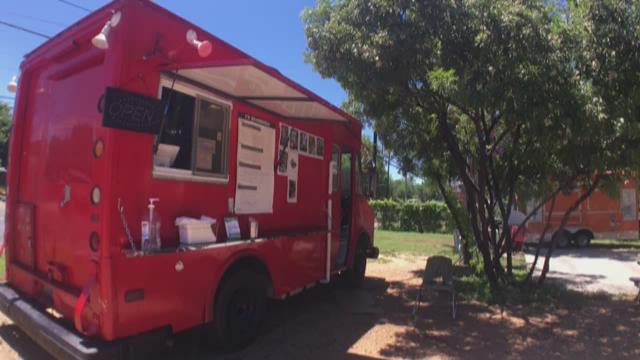 AUSTIN, Texas -- In groups, at food parks or by themselves --- food trucks are everywhere in Austin.

"We made up a word it's called Bajanese cuisine," said Allan Gindic, as he described the menu of Baha Street

According to census data, Austin is the second city with the most food trucks per capita in the United States. That's about one food truck per 25,000 people.

Even older trucks like Thai Kun on east Sixth Street, which has served food truck fans for nearly five years, have been able to keep their momentum going.

"Find a solid crew and you can do it in this town," said Thai Kun manager and cook Stephen Kaste.

Kaste says the city, as well as brick-and-mortar restaurant owners, play a big role in the success of smaller startups like food trucks.

"The fact that Austin lets us operate -- and the zoning is really good for food trucks here. Where [as] in other cities, big restaurant groups... they try to stifle food trucks because we offer food at a lower cost," Kaste said.

"Not only is it for the quality of the food... It's more like an intimate experience, plus the price range isn't that bad either, said customer Marcus Gonzalez.

However, it is not easy to get a permit to operate a food truck. They have to follow a strict list of guidelines, similar to brick-and-mortar restaurants.

You can find those requirements, here.