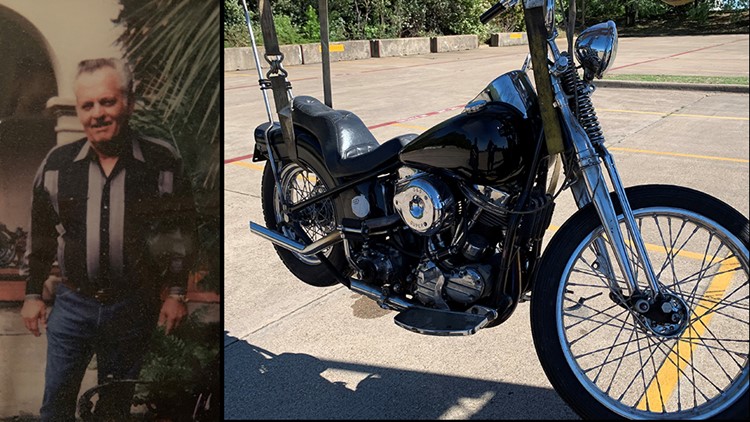 Photo by: Darrell Sims
Deloy Sims' 1957 Harley Davidson Panhead was his pride and joy and he was crushed when someone stole it.

Motorcycle stolen in 1971 returned to rightful owners in Houston

HOUSTON — A motorcycle stolen from a Houston man nearly 50 years ago is back where it belongs.

Darrell Sims said the 1957 Harley Davidson Panhead was his dad’s pride and joy. Deloy Sims was crushed when a thief stole the bike in 1971.

Sims filed a police report but as months -- then years -- went by, he gave up hope of ever seeing his Harley again.

Fast forward to December 2018 in Dallas where someone tried to apply for a lost title on the motorcycle.

Dallas police discovered the Harley had been stolen in Houston and contacted HPD.

Houston police tracked down Darrell earlier this month.  That set the wheels in motion on a brief legal battle to get the bike back.

Darrell Sims and his mom drove to Dallas to retrieve a motorcycle stolen from his dad in 1971.
Darrell Sims

Sims and his mom dug up enough old records to prove to a Dallas judge that it was the same motorcycle stolen from them in 1971.

They only wish Deloy was still around to see it.

“As you can imagine, it’s been an emotional event for us and we’re still amazed,” Darrell said. “My intention is to restore it to its original glory as a tribute to our dad.”

Sims said he’s already had offers from as far away as Paris to buy the Harley, but it’s not for sale.

They plan to keep it in the family where it belongs.