The thieves were trying to steal the Galapagos tortoise named Jasmine but dropped it and ran over it during their getaway. 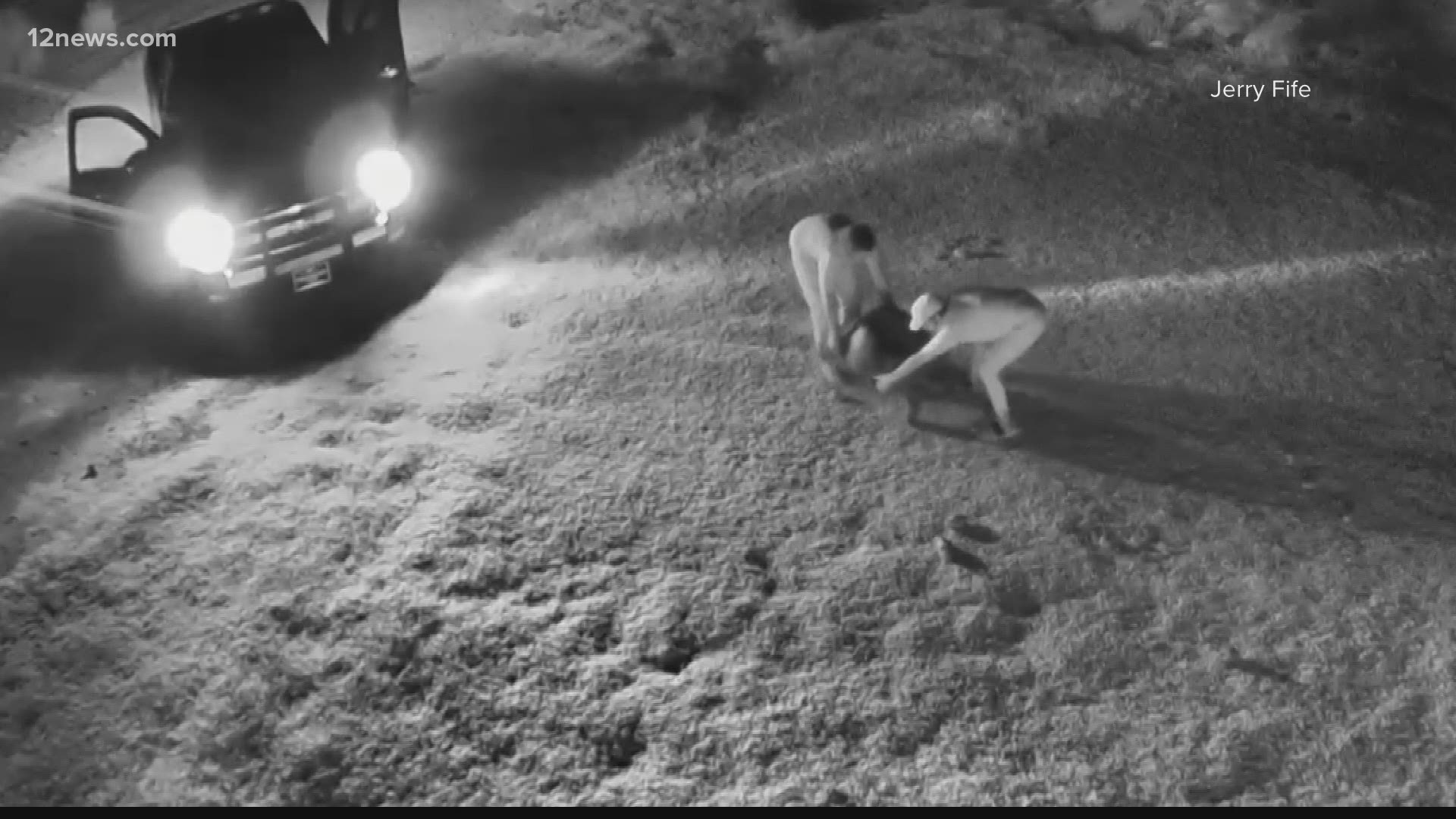 PHOENIX — In the early morning hours, two would-be thieves attempted to steal a real tortoise from a Phoenix yard. But when the homeowner startled them, they dropped the tortoise and ran her over with their truck as they made their escape.

The whole incident was caught on Jerry Fife’s Ring camera and on his cell phone as he chased the thieves out of his yard.

The incident took place around 2:30 a.m. Monday morning after an alarm in Fife’s yard alerted him that something was wrong.

On his camera, Fife could see two people trying to carry his 27-year-old Galapagos tortoise named Jasmine to their pickup truck.

“So, I ran out and scared them off,” said Fife.

In their haste, the two thieves dropped Jasmine and jumped in their truck. That’s when Fife started recording on his cell phone. What he saw next was something he couldn’t believe.

“In their haste to get away, they ran over the tortoise,” explained Fife.

Jasmine suffered extensive injuries to her carapace, as the pickup truck shattered her shell. Fife drove her to Tucson to see if a veterinarian there could help, but the injuries were too much.

“People just don’t understand,” said Fife, fighting through emotion. “It’s like, how can someone do this to an animal? Why did they do it? Why were they stealing it in the first place?”

His questions may not have an absolute answer until Phoenix Police are able to track the pair down.

While Galapagos Tortoises are protected In Ecuador and the Galapagos Islands, Breeders and conservationists in the United States can breed and sell their tortoises within the U.S. for education and conservation efforts. Those who choose to do so are registered on the Captive-Bred Wildlife Registry and require a separate U.S. Fish and Wildlife Service interstate commerce permit to sell a Galapagos Tortoise across state lines.

The Endangered Species Act requires FWS to issue permits to people like Fife, who are committed to conservation efforts.

Because of their size, it’s almost impossible to illegally sell a stolen Galapagos Tortoise in the United States, Fife only has one theory.

“You know, outside the country, that tortoise could be worth a couple of hundred thousand [dollars], potentially.” He explained.

For now, Fife will tend to his other tortoises while mourning the loss of a family member that he raised from a hatchling, and hope police will get some leads in the case.

“They’re such a gentle, wonderful animal and I’m just hopeful that the police -- from the videos -- can identify the truck, identify the license plate, and catch the people that did it,” said Fife.

Anyone who has information on this case is asked to contact the Phoenix Police Department.