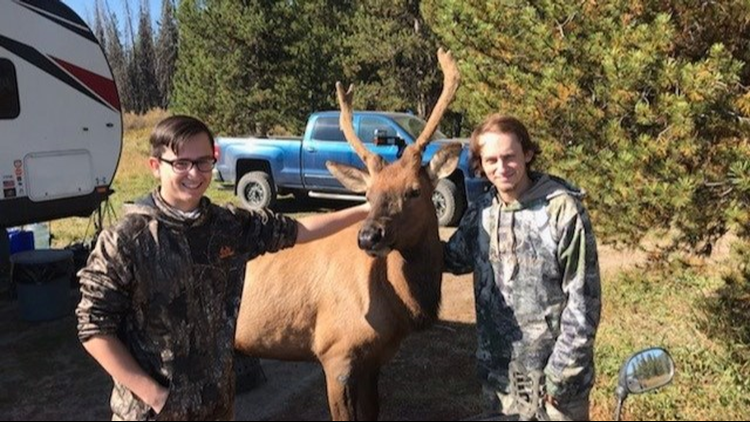 Photo by: Trevor Chadwick
Elliot the Elk recently made friends with some campers in the Bear Valley area before being taken safely into custody by Idaho Fish and Game.

BOISE, Idaho — It's a face that's become quite famous around the Treasure Valley in recent weeks - Elliot the Elk.

Elliot was taken in by some people in Sweet, Idaho in the spring of 2018 as a calf and raised among humans. He wandered off for a time, but eventually came back to the Sweet area in late spring, early summer of 2019, according to Idaho Fish and Game.

Charlie Justus, regional conservation officer with Fish and Game, said Elliot was picked up by staff in Sweet around mid-August.

“Being a yearling bull, he’s big and he doesn’t realize he’s that big," he said. "He was pushing people around and giving people kisses and that kind of stuff."

With mating season close, Justus said Elliot could become aggressive and potentially hurt people so it was best he be moved away from people.

Fish and Game worked to try and find him a home but decided to place him among other elk herds and see if he could find a herd to live with and make it in the wild.

So Fish and Game released Elliot near the Bear Valley area.

After about two weeks, instead of finding a herd, Elliot found people. He wandered into a camp full of hunters.

That group included Trevor Chadwick, a Star city councilman, as well as his two sons and a couple other friends.

Chadwick said he got a call on Wednesday, Aug. 28 from his brother-in-law, who was already at their camp site, saying an elk had walked straight into camp.

After arriving at the camp with his sons, Chadwick knew right away it had to be Elliot.

Elliot the Elk made some friends with campers in the Bear Valley area.
Trevor Chadwick

“There was Elliot standing right there in the camp and I was like, ‘Holy cow, that’s Elliot.’ Because I read the story – I saw the story about him,’” Chadwick said.

Elliot definitely wasn't people shy and made fast friends with the group.

“He walked right up to myself and my sons,” Chadwick said. “He just followed us around everywhere we went, whether it was my boys walking down the road, he’d follow them like a dog. Elliot would go bed down by the river underneath a pine tree and they would start the 4-wheeler to go somewhere and Elliot would come running from that spot right up to the 4-wheeler, start licking the tires, stick his nose right in their face. It was pretty cool. It was kind of a fun experience.”

Elliot loved getting his head rubbed by everyone and he also liked being up close and personal - sometimes a little too up close.

“There’s actually a picture that I posted that shows him trying to climb up into my brother-in-law’s camper," Chadwick said. "So he actually came and stuck his head into the door and brought his leg up and started to step up on the step."

Elliot the Elk made friends with some campers in the Bear Valley area.
Trevor Chadwick

Luckily, they were able to keep Elliot out of the trailer but the elk did stay with the group for about five days before Fish and Game officers came to get him.

Chadwick said Elliot didn't want to go and the officers had to chase him because he didn't like the rope they had for him.

Eventually, Fish and Game was able to get him into a trailer and took him into custody on Sept. 1. Elliot is still with Fish and Game while they work to find him a permanent home.

RELATED: Friendly elk back in captivity weeks after being relocated to prime hunting area

“We’re in the process of finding either an accredited zoo or a research facility or a nonprofit or something like that, that is interested in him,” Justus said. “We’re committed to finding a place for him.”

Right now, there are a couple of possible places that have shown interest in taking Elliot but Justus said, so far, nothing has been decided.

Elliot the Elk made friends with some campers in the Bear Valley area.
Trevor Chadwick

Chadwick said while camping with Elliot was a fun experience, he also hopes people use it as a learning experience.

“I think it’ll be a great education tool for people to see what can happen if you do things like that instead of allowing them to be wild,” he said.

Justus agreed and reminds the public to leave wild animals in the wild. If you do come across an injured wild animal, or an orphaned baby animal in the wild, call Fish and Game to take care of it.