After a 5-hour trip from San Antonio, Elsa appeared to be playful and happy when she arrived at the Black Beauty Ranch in Murchison, Texas. 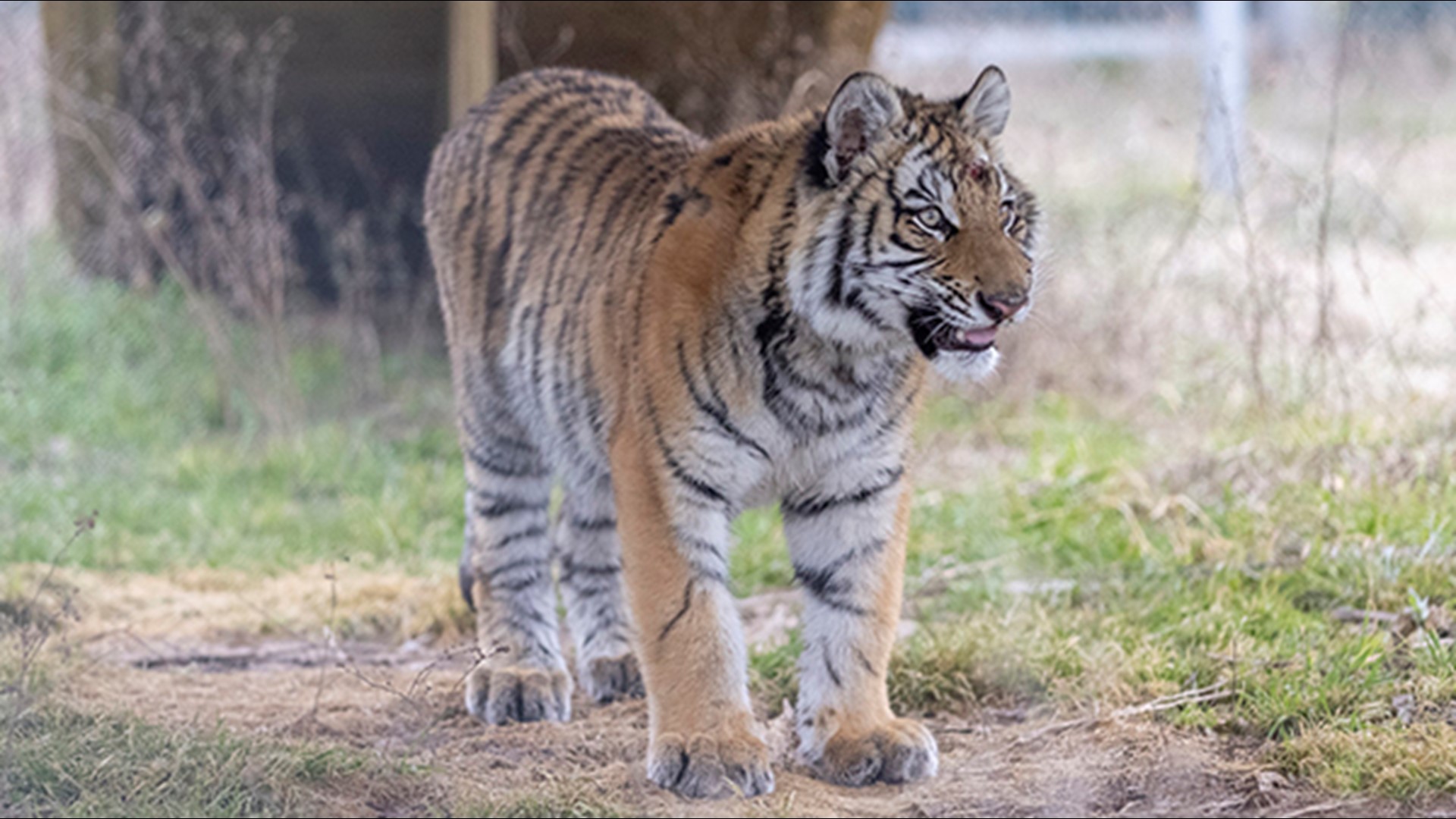 MURCHISON, Texas — Elsa the tiger is getting her fairy tale ending. She may have even met her prince charming.

The rambunctious young tiger rescued near San Antonio is settling into her new home at a wildlife sanctuary near Tyler.

Elsa was saved by Bexar County deputies earlier this month after someone reported a crying tiger left out in the bitter cold on someone’s property.

The 6-month-old, 60-pound tiger has a raw area on her forehead from rubbing on her cage because of stress, according to the Humane Society US. She has fur missing from wearing a dog harness.

RELATED: 'Elsa the Tiger' rescued from the cold gets a new home

The Bexar County Sheriff’s Office took Elsa to a local wildlife rehabilitation center until the temperatures warmed up enough for her to be safely transported to her new home.

After a 5-hour trip from San Antonio Tuesday, Elsa appeared to be playful and happy when she arrived at the Black Beauty Ranch in Murchison, Texas.

A “pet” tiger found in San Antonio during the Texas cold snap gets her forever home at @HumaneSociety's Black Beauty Ranch. https://t.co/Bl0xJRclDG via @HSUSKittyBlock. pic.twitter.com/5i04ex4sKn

Her life there will likely improve dramatically, according to Noelle Almrud, senior director of Black Beauty.

“She was on an inappropriate diet that would have caused severe health damage, but luckily, we got her early enough and will be able to remedy that,” Almrud said. “We expect her to quickly acclimate to her large, natural habitat and start behaving more like a tiger than a pet. We will provide everything she needs to have all of her physical and emotional needs met and give her the fairy tale ending she deserves.”

Elsa will be quarantined for the next 30 days to ensure that she is healthy.

When she’s a little older, she will be introduced to a larger space and may be able to join Loki, another tiger that came to Black Beauty in February 2019. Loki was discovered in an abandoned house in Houston, trapped in a cage where he could barely move. Now, Loki and Elsa are in adjacent habitats and are already very curious about each other. Love connection, purr-haps?

Texas has a history of tragic incidents involving tigers that were privately owned. A 3-year-old boy was killed by a relative’s pet tiger; a 4-year-old boy had his arm torn off by his uncle’s 400-pound tiger, and a 10-year-old girl was killed when one of her family member’s two tigers grabbed her by the neck and dragged her.

“Small young tigers like Elsa quickly become large, dangerous and deadly,” warned Kitty Block, president and CEO of the Humane Society of the United States. “Private possession of tigers as pets, and their use in cub petting ‘operations’ like we saw in 'Tiger King,' is a serious and sometimes deadly problem in this country.”

At the federal level, the Big Cat Public Safety Act would help stop people from treating tigers like pets. It would also ban public contact with tigers, lions and other dangerous cat species at places like the zoo featured on "Tiger King."