What a doctor with Millennium Physicians Kingwood did to Kandi Cox and her 82-pound service dog, Bentley, during that exam Tuesday more than made Cox uncomfortable. 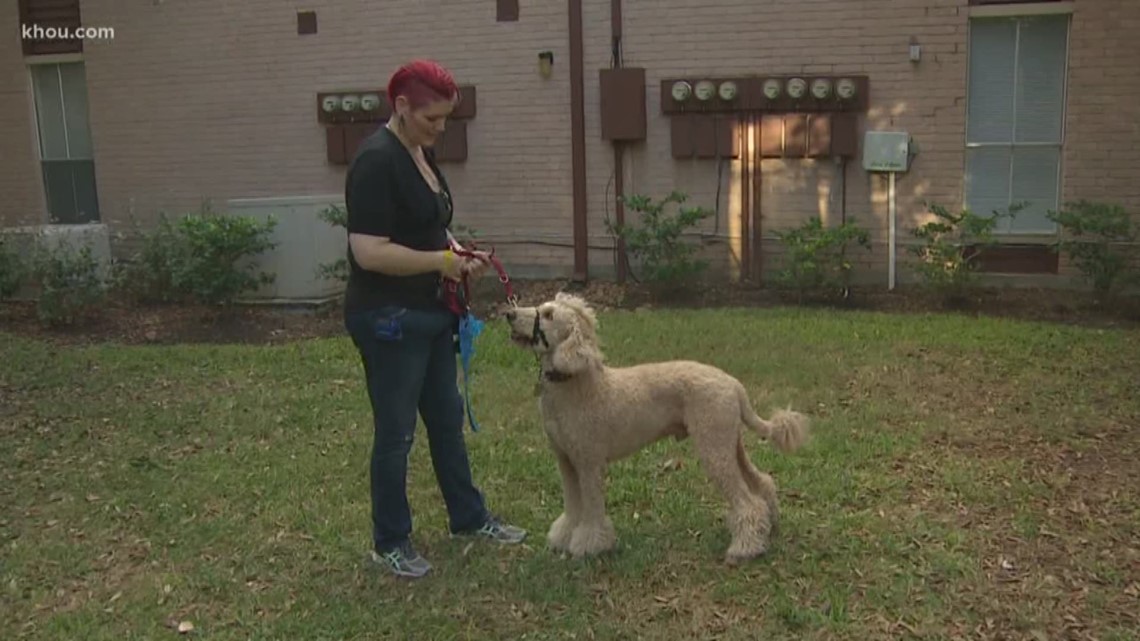 HOUSTON — A woman battling post-traumatic stress who uses a service dog to calm anxiety claims a physician forced her to leave an exam because of the dog.

Kandi Cox said a recent test showed drastic drops in her blood cell count. She said she also tested positive for cervical cancer. So prior to a follow-up exam worry dogged her.

What a doctor with Millennium Physicians Kingwood did to Cox and her 82-pound service dog, Bentley, during that exam Tuesday more than made Cox uncomfortable.

“He said just blatantly that we had to leave,” Cox said. “It was really...I’m going to cry.”

The doctor wanted Bentley taken out the office even though Cox claimed to need him.

She has post-traumatic stress and trained Bentley to calm her, Cox said.

By law, she does not need any registration or certification. Also, as long as the service dog is trained, its handler can take the animal into restaurants, stadiums, hotels and government buildings, according to the American with Disabilities Act.

“That’s why I was confused with the doctor,” Cox said. “You’re a health professional. How do you not know this? So I was confused, upset, angry, and I just wanted to leave, actually. I was like OK, I’ll leave, and he was like, I don’t care. He said that. OK, I don’t care, and he didn’t. He was not a nice guy about it.”

Rachel Taylor, Practice Administrator for Millennium Physicians told KHOU 11 News the doctor is highly allergic to dogs and was concerned about immune-deficient patients in the office.

“Service animals are essential to many individuals with disabilities,” she said in a statement. “Under the federal Americans with Disabilities Act, a service animal has been individually trained to do work or perform tasks for an individual with a disability. Further, the specific task performed by the dog is directly related to the person’s disability.”

“This law requires medical offices to make reasonable efforts to accommodate individuals with disabilities by allowing service animals into the office. However, this law does not extend to emotional support animals, who are not so trained, and consequently there is no bright line for medical offices to follow. Many public accommodations, such as airlines, face the same problem, as some people find emotional support in animals that may well pose a public nuisance, or even at times a threat to others.

“Our patients are our number one priority, and the policies we adopt and decisions we make every day are based on what we believe is best for our patients’ health and comfort.

“Our practice is devoted to the treatment of cancer patients, many of whom experience emotional support and comfort from their beloved animals. However, out of respect for others in the clinic, especially in the chemotherapy area, our patients have historically chosen not to bring their support animals with them during their clinic visits. Today was the first time we have ever encountered a problem.

“In our medical oncology clinics, most of our patients are on chemotherapy and/or radiation therapy, and they are immune-suppressed, meaning they can be acutely susceptible to smells, sounds, tastes and other triggers, as well as germs. Many have very severe allergic reactions while on chemotherapy. We make every attempt to keep our environment as safe and supportive as possible while patients receive their treatments.

“The physician in the clinic today where the patient arrived felt that it was in the best interest of the other patients in the clinic that the patient’s dog not be allowed in that particular patient care setting, given its proximity to the chemotherapy area in that office. We were, however, able to accommodate this patient later in the day, with her animal, in one of our other clinic offices, where the chemotherapy area is more remote.

“As this has now occurred, we intend to adopt a written policy with regard to the presence of emotional support animals in our clinics, so that all of our patients will know what we can allow before they appear for their appointments.

“We very much regret today’s occurrence, and we hope that with the adoption and dissemination of a written policy in this regard, no patient will ever be inconvenienced or embarrassed while visiting our clinics.”

Cox is OK with the clinic writing such a policy and plans to go back with her dog. She just hopes the doctor who wanted Bentley out is more understanding.