Thousands of grackles are taking over Houston's parking lots — again

They aren't an uncommon sight - or sound - across southeast Texas, but this video is incredible. 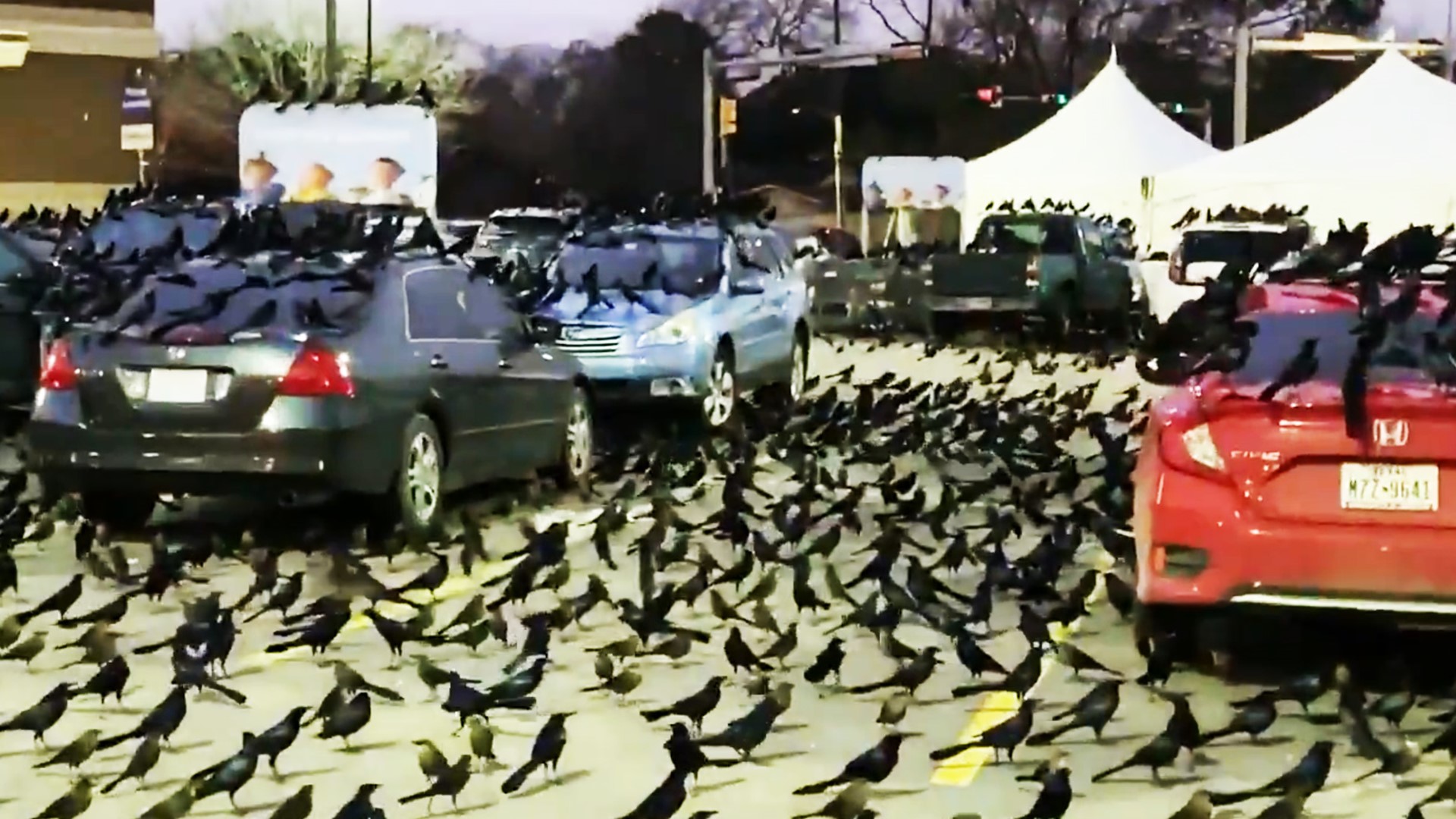 HOUSTON — Anyone else think grackles should be named the official bird of Houston?

They are everywhere, especially right now.

Check out the video above that KHOU 11 reporter Brett Buffington recorded outside the Kroger store near Meyerland on Wednesday evening: "Ummmm... Who do I report a bird problem to? BOGO Grackles at @kroger of S. Post Oak..."

It shows thousands of the black birds, sometimes called "devil birds," flying and resting in the parking lot, many on the cars.

Brett tweeted that it was a cool sight until one of them made a mess on his newly-washed news van.

And the reporter is not the only one who has seen them around lately.

Over on the Houston subreddit, users shared images of grackles in an H-E-B parking lot and gathered at an intersection near The Aquarium in downtown:

Yeah, avoid Bagby and Memorial if you just washed your car. The End is Near.
The houston community on Reddit. Reddit gives you the best of the internet in one place.

Swarms of these black birds are not an uncommon sight or sound in Houston. They pop up by the thousands and go viral year after year, especially this time of year.

Houston Audubon writes "grackles are fierce parents, defending their nests by chasing, mobbing, or diving at perceived predators, including humans."

Despite their prominence in grocery store parking lots, their preferred habitat is in both rural and urban areas.

So what's the deal with parking lots?

"They tend to congregate in large flocks and prefer shopping centers and fast-food store parking lots where there's trash for food and trees or light posts for perching," Vicki Stittleburg writes for Houston Audubon.

Here's her full profile of the bird:

"The Great-tailed Grackle is North America's largest grackle. Males have an all black body with bluish purple iridescence, a long, tapered tail that folds into a distinctive keel shape, yellow eyes, long black legs and a black stout bill. Females are about half the size of males; they have a grayish brown body, a buff-colored throat, yellow eyes, a lighter eyebrow and a shorter tail. Juveniles have the female’s dark brown plumage, with streaked underparts and a dark eye. In 1900, the northern edge of the Great-tailed Grackle’s range barely reached southern Texas. Since the 1960s they’ve followed the spread of irrigated agriculture and urban development into the Great Plains and West, and today are one of North America’s fastest-expanding species. Great-tailed Grackles are a permanent sight in Houston and can be found in any area inhabited by humans that has some trees. They tend to congregate in large flocks and prefer shopping centers and fast-food store parking lots where there's trash for food and trees or light posts for perching. Great-tailed Grackles have a wide repertory of songs and sounds including piercing whistles and creaks. In the evening, raucous flocks pack neighborhood trees creating noisy roosting aggregations."