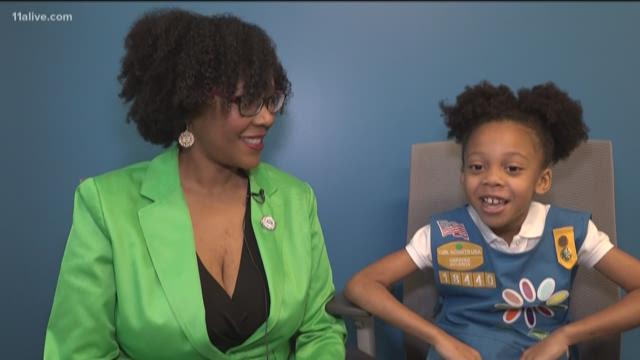 Just like our favorite Girl Scout cookie, we can't get enough of this local daddy-daughter duo who's getting creative to sell their sweet treats.

Charity Joy and her father Seymore Harrison went viral last year with their adorable parody of Stone Mountain native Childish Gambino's "Redbone," which they rearranged to "stay woke, buy these cookies." It even led to an appearance on "The Late Show" with Stephen Colbert, where she got to meet the local rapper.

The Buford natives are back with another duet - this time with the "Cookie Girl Rock." The new precious parody was inspired by Decatur native - and former Girl Scout - Keri Hilson's 2010 hit song, "Pretty Girl Rock."

Charity, now 7 years old, explains she was inspired this time around by Hilson's visit to the Girl Scout Luncheon back in September. At the end of the video, Charity thanks "Miss Hilson" while giving a Girl Scout salute.

11Alive reached out to Hilson herself, who said the new video made her "melt" with happiness.

"Well she just got more than a few boxes outta me," Hilson said. "Now if I only had social media back when I was a Girl Scout!! Shout out to Girl Scouts creating more young female entrepreneurs!!!"

Charity and her fellow Girl Scouts from the Duluth chapter will start selling cookies again on Friday. If anyone wants to order from her, they can do so through a message on Instagram.