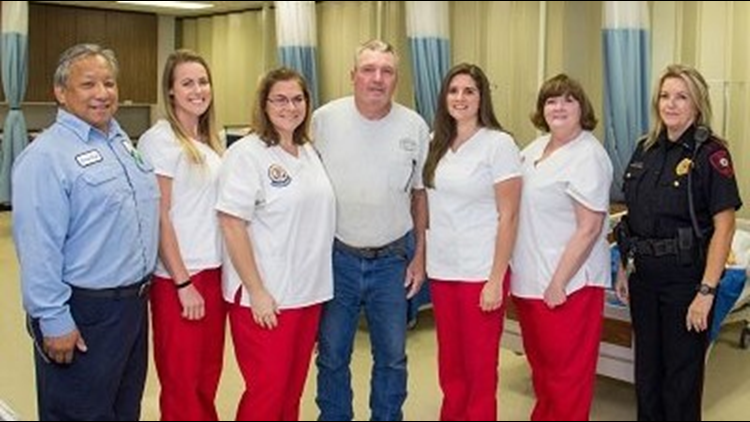 TEXAS CITY, Texas — Four nursing students on break from a CPR class got to test their skills when an electrician was electrocuted nearby.

Alexis Boettcher, Rachel Cunningham, Shanee Scribner, and Andrea Strickland, were taking a class at the College of Mainland on Sept. 19 when they got a 15-minute break.

Because their breaks are usually 10 minutes, Boettcher asked her friends to walk with her to the financial aid office.

As they were in the office, a man working outside near a manhole cover was electrocuted.

Gary Glover was using a crowbar to lift the manhole cover when the bar contacted a live wire. Glover, an electrician supervisor for Crescent Electric Co., immediately went into cardiac arrest.

Another electrician working with Glover, Lorrin Ching, managed to roll him away from the energized cover by pulling him away by his shirt before beginning CPR.

“That day was very scary, I thought he was going to die,” said Ching.

The four students took notice of what was happening and ran out to the where Glover was. The students took over compressions as police were called.

An officer arrived shortly afterward with an Automated External Defibrillator, also known as an AED. The AED was applied to Glover’s chest to help get his heart into rhythm as the students continued heart compressions.

Just five days after the incident, Glover, 55, returned to work at the Texas City campus. He said he remembers lifting the manhole cover but didn’t realize he had so many people helping to save his life.

“Thank you,” Glover said while meeting the four student nurses for the first time a week later. “Thank you all.”

“God put us there for a reason,” said Cunningham. “It was to save that man’s life.”

“I honestly believe God put us there for him,” said Boettcher, who hopes to be a Life Flight registered nurse. “He was blue and had no palpable heartbeat. He was going. I’m blessed to have been there for him that day.”

Bauer said they’d been reviewing specific scenarios and content in class that day, adding she’s convinced Glover had some divine intervention watching over him that day.

“There are alignment facts that make you realize Mr. Glover had angels watching over him,” Bauer said.

Scribner said it had already been traumatic for her as her father died that morning at 3 a.m. after suffering from liver cancer.

“He was in San Antonio and I was feeling guilty for leaving him on Sunday to come back for school,” explained Scribner. “But when he was diagnosed with liver cancer and given only a few weeks to live, he made me promise I wouldn’t fail out of school,” said Scribner, who wants to work in cardiology. “Being able to be there to help save Gary’s life reinforced in me and gave me peace knowing that I was supposed to be there instead of with my dad.”

Scribner also lost her mother due to cardiac-related health problems over the summer.

All four students are expected to graduate in December with an associate degree in nursing.

The ceremony will take place on campus on Tuesday, Oct. 16, at noon.