Interactive map: Splashpads and spraygrounds all over the Houston area

It's miserably hot in Houston but there are some fun and free ways to beat the heat.

HOUSTON — With more 100-degree days in the forecast, finding ways to entertain the kiddos can be challenging.

Splashpads and spraygrounds are the perfect option for younger kids -- and adults who are young at heart.

INTERACTIVE MAP: Find splashpads all over the Greater Houston Area.

One of the favorite spots to cool off is Discovery Green, which has a splashpad and mist tree.

Along with sharks, stingrays and beautiful fish, the Downtown Aquarium has a free splashpad and you don't have to buy a ticket to use it.

The interactive water play area at Hermann Park is part of the Buddy Caruth Park designed for children of all abilities.

Credit: Hermann Park
The interactive water play area at Hermann Park is part of the Buddy Caruth Playground designed for children of all abilities.

The City of Houston has nearly two dozen spraygrounds. Many of them were paid for with donations from H-E-B.

Aron Ledet Park (H-E-B) 6500 Antoine
The Aron Ledet Park sprayground opened in June 2005 through the generous support of H-E-B. The design of the play area appeals to park visitors with its brightly colored play surface and the inventive design of its spray fixtures.

Cullen Park (H-E-B) 19008 Saums Road
The Cullen Park sprayground opened in August 2003, thanks to H-E-B. It features a colorful play surface and multiple geyser and spray fixtures, and is located within easy viewing of the picnic pavilion and the pecan grove picnic area.

Dodson Lake (H-E-B) 9010 Dodson
The H-E-B Water Playground at Dodson Lake Park was the seventh addition to the company’s Water Playground legacy. It opened in 2008 and its design includes a unique concentric circle splashpad that creates the illusion of ripples with geysers, pop-up sprays, Tulip sprays and a Fan Jet spray.

Edgewood Park (H-E-B) 5803 Bellfort.
The Edgewood Park sprayground was built as part of the H-E-B Water Playground legacy and was opened to the public in June of 2003. Its design includes a brightly-colored concrete play area, geysers and spray elements, and a curving seat wall.

Ervan Chew Park 4502 Dunlavy
Built in 2010, the sprayground at Ervan Chew Park is convenient to the playground, picnic area, soccer and baseball fields, and the dog park.

Hackberry Park 7777 S. Dairy Ashford
This 1,200-square foot sprayground opened to the public on August 12, 2010. It features brightly-colored recreational areas equipped with turtles and lily pads that squirt and spray water and mist, as well as in-ground geysers.

RELATED: The best water parks in the Houston area

Herman Brown Park 400 Mercury
The sprayground at Herman Brown Park features a frog theme. At one end, a large, vividly colored play surface sports the picture of a leaping frog, and the sprayground undulates down from it with a gentle slope, suggesting a stream.More frog pictures line this area. Interactive water geysers and spray elements triggered by a push button spring up from the �stream.� A covered pavilion with restrooms is adjacent to the sprayground, as are some tables in the sun. Tennis courts are a short walk away.

Hermann Park 6001 Fannin
The Hermann Park water sprayground, located near the Playground For All Children, opened in 1990. It features timed spray elements on a blue rubber surface. In-ground sprays, poles, palm trees and a spiral provide a variety of water effects for all children to play in. Two large beaches create a sand play zone adjacent to the water play area. Here children of all abilities can enjoy the fun of sand on the ground.

Hidalgo Park (H-E-B) 7000 Avenue Q
The Hidalgo Park sprayground opened to the public June 21, 2003, thanks to a generous donation from H-E-B. It adds a festive dimension of cool fun to one of Houston’s most venerable parks with a brightly colored play surface and geysers and water spray fixtures, all within easy reach of a curved seat wall.

Jaycee Park (H-E-B) 1300 Seamist
The sprayground at Jaycee Park is Houston’s ninth funded by H-E-B, built through the company’s partnership with H.P.A.R.D., the Houston Parks Board, and Friends of Jaycee Park, a neighborhood group organized to raise funds to revamp the park. Opened to the public on May 21, 2011, the water facility’s timed spouts are surrounded by colorful, oversized butterflies and leaves in the paved surface, and there are benches around it for the enjoyment of parents who want to stay dry while watching their youthful charges run wild.

Marian Park 11000 S. Gessner
The Marian Park water sprayground opened in 2011. It is a welcome addition to this important and much-used community center. It includes three different areas of play, with individually operated spray features. An adjacent shade structure with seating makes it easy to supervise everyone playing in the water jets.

Montie Beach Park (H-E-B) 915 Northwood.
The Montie Beach water sprayground is the sixth such facility built through a generous donation from H-E-B. Appropriately for the name of the park, its design includes a beach theme, including a palm island, a whale design in its colorful play surface sporting a spout spray at its hump, and multiple wave sprays that create a rolling “wave” effect. It opened in 2006.

Nieto Park 500 Port
The Nieto Park water sprayground opened in 2003. It was designed to look like a beach, with a wave of stairs, a surfboard, real palm trees and plastic palm trees that spray water. It has a rubber surface with play items that also spray water. This project was funded with Community Development Funds. Other park improvements include two picnic shelters, benches, landscaping, drinking fountains and electrical work.

Settegast Park 3000 Garrow
The Settegast Park water sprayground opened in 2005. It includes a multi-colored rubber surface and a ground geyser, a bell-spray column, a misty arch, a magic touch bollard, a water trio, a donut and a flower. Other park improvements include park security and ball field lighting; drainage, irrigation and landscaping improvements; the addition of a new educational garden with ornamental steel fencing, and playground renovations.

Shady Lane Park 10220 Shady Lane
The sprayground at Shady Lane Park was built as part of the Parks Build Community renovation undertaken as part of the National Recreation and Park Association 2013 Congress and Exposition. It ties in with the renovation�s bayou ecosystem theme with alligator heads emerging from the concrete among the water jets, and the water course motif carries throughout the park. It opened to the public on October 10, 2013.

Tony Marron Park 808 N. York
The water sprayground at Tony Marron Park opened in 2004. It is located at the pavilion plaza and features a variety of ground sprays. A seat wall curves around the area, offering great views of the park and downtown, as well as access to the cooling water. The project was funded through the Park People.

The RiverPark recreation center has a fun splashpad with a misting rainbow, fountains and dumping buckets. It's closed on Tuesdays for cleaning and maintenance.

The Smart Financial Centre's also has a small splashpad in its plaza. The plaza is closed this weekend for FBISD graduations. It's closed until noon on Mondays for cleaning.

Tap here for splash parks in Pearland, Clute and Freeport

There are at least 20 splashpads in The Woodlands. Here's an interactive map.

Here's a look at splashpads in the Galveston County area 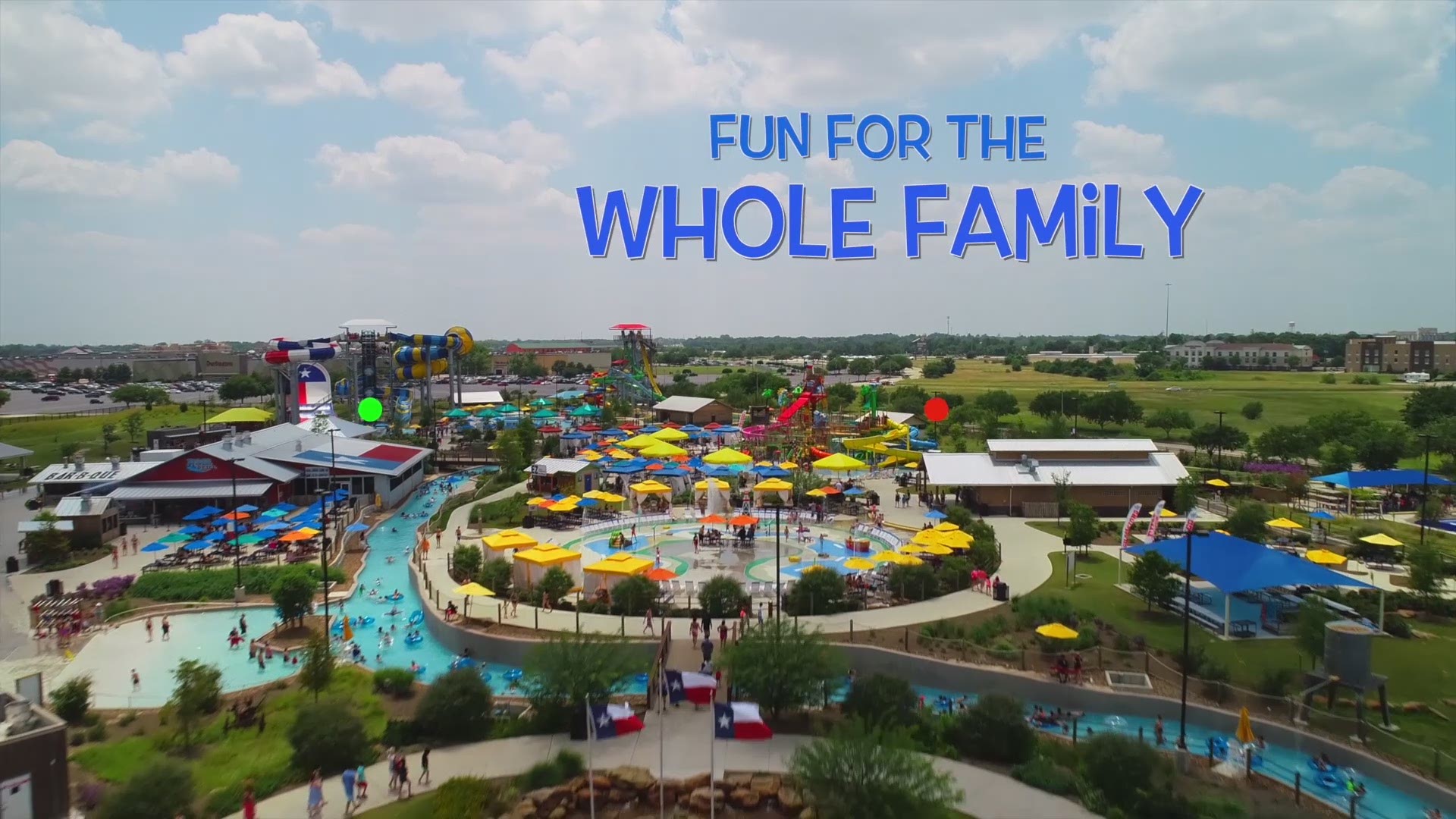