Molly Mae is a two-year-old Labrador retriever. She's been training her whole life to join Jack as his diabetes alert dog this month. 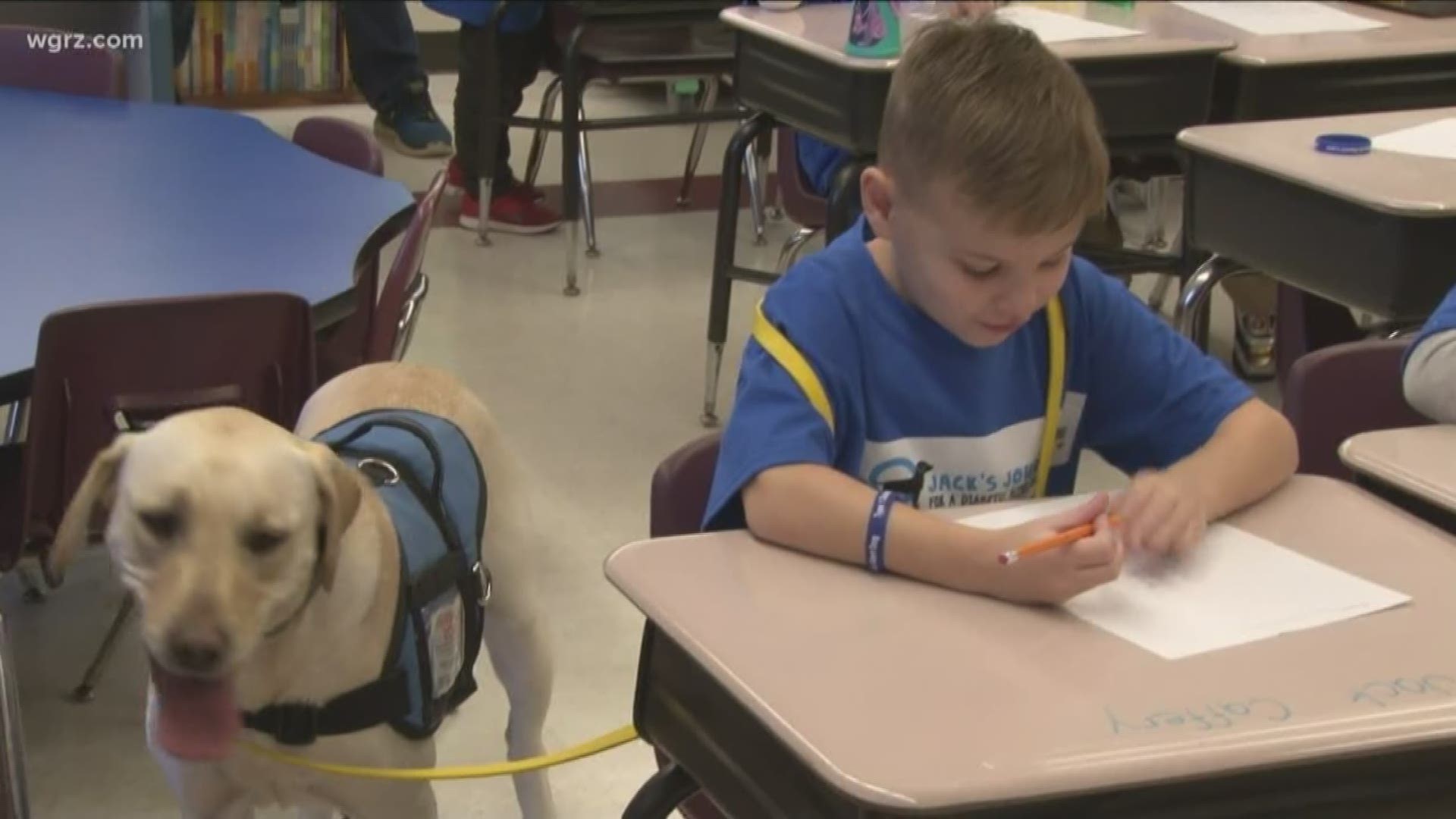 BUFFALO, N.Y. — Like most six-year-olds, Jack Caffery has tons of energy and loves to play. But ten to fifteen times a day, he has to stop whatever he's doing and check his blood sugar level to make sure it's not dangerously low or high. Jack has been living with Type 1 Diabetes since he was three, and his pancreas doesn't produce insulin the way it's supposed to.

"Without insulin you die, so it is something that has to be monitored 24/7," his  mom, Jill, told 2 On Your Side. "It's every single day, seven days a week, there's no vacations, there's no breaks," Jill said.

It's a big responsibility, and it requires a lot of vital help from his parents and his teachers.  Soon, Jack's team will have a new helping hand. Well, more like a helping paw.

Molly Mae is a two-year-old Labrador retriever. She's been training her whole life to join Jack as his diabetes alert dog this month.

"After he was diagnosed I was lost and just kind of looking for some other way to help us cope with this disease," Jill explained. That's when she found trainer Jody Filonovich and Dogworks Service Dogs in Rochester.

"Diabetes alert dogs in the service dog realm are a little newer," Filonovich told 2 on Your Side. "They can literally be taught scent and search or anything."

The Caffery family held a community fundraiser to pay for Molly and her training in 2017. Ever since she was born, Jill has been swabbing Jack's mouth when his blood sugar is low, and sending it to Filonovich to train Molly with. Now, when Molly is around Jack, she can sense when a low or high is coming, even before Jack's medical devices.

"So when she smells a low coming, what she is trained to do is she will stop, she will get in front of Jack, she will sit down and she will paw at his leg, alerting him that there's something wrong, you need to stop, you need to check," Jill said.

Having a service dog in school will make things a little different for the kids at Maryvale Primary School, where Jack is in first grade. They recently held a big assembly to introduce Molly to everyone.

"The kids will be educated on how to interact with a service dog. You don't make eye contact, you don't ask to pet the dog, you don't call the dog," Filonovich explained.

The kids also walked away with a better understanding of Jack's life with Type 1 Diabetes.

"I never want him to feel that he's a burden or doesn't feel comfortable," Jill said. "So I want him to stand up and I want him to show everybody that this is what Type 1 Diabetes is, and this is how I live with it and I get to have a dog with me to help me. So he always has someone by his side."

Diabetes a lot to manage, especially for someone as young as Jack. But like most challenges, it's not as scary when you're facing it with your best friend.

RELATED: Where to fetch a bachelor's degree in dog training

RELATED: Labrador retriever most pup-ular US dog breed for 28th year in a row